Radar for Mars Gets Flight Tests at NASA Dryden

Southern California’s high desert has been a stand-in for Mars for NASA technology testing many times over the years. And so it is again, in a series of flights by an F/A-18 aircraft to test the landing radar for NASA’s Mars Science Laboratory mission.

The flight profile is designed to have the F/A-18 climb to 40,000 feet (about 12,000 meters). From there, it makes a series of subsonic, stair-step dives at angles of 40 to 90 degrees to simulate what the Mars radar will see while the spacecraft is on a parachute descending through the Martian atmosphere. The F/A-18 pulls out of each dive at 5,000 feet (about 1,500 meters. Data collected by these flights will be used to finesse the Mars landing radar software, to help ensure that it is calibrated as accurately as possible. 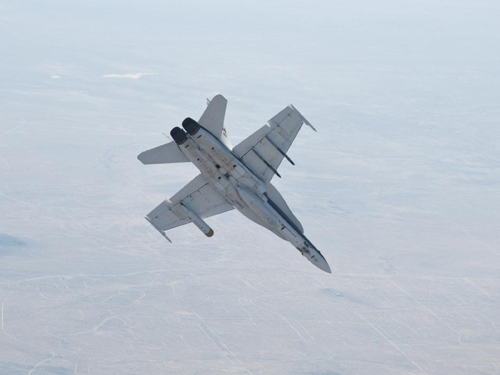 The testing is a collaboration of NASA’s Dryden Flight Research Center, Edwards, Calif., with NASA’s Jet Propulsion Laboratory, Pasadena, Calif. Earlier tests, with a helicopter carrying the test radar, simulated the lower-altitude portion of the spacecraft’s descent to the surface of Mars. For more information about the F/A-18 tests, see https://www.nasa.gov/topics/solarsystem/features/F-18_flying_msl_radar.html .

The Mars Science Laboratory mission’s rover, named Curiosity, will be shipped this month from JPL to NASA’s Kennedy Space Center in Florida to be readied for launch between Nov. 25 and Dec. 18, 2011. The spacecraft will arrive at Mars in August 2012. After Curiosity lands on Mars, researchers will use the rover’s 10 science instruments during the following two years to investigate whether the landing area has ever offered environmental conditions favorable for microbial life.

JPL, a division of the California Institute of Technology in Pasadena, manages the Mars Science Laboratory Project for the NASA Science Mission Directorate, Washington. More information about the mission is online at: https://marsprogram.jpl.nasa.gov/msl/ .