Brown University biologists have uncovered a complicated chain of molecular events that leads from insulin to protein degradation in muscles and significantly diminished life span in fruit flies. The new study in PLoS Genetics, which may have broad implications across species, identifies the fly version of the mammalian protein activin as the central culprit in the process.

PROVIDENCE, R.I. [Brown University] — Fruit flies are notoriously short-lived but scientists interested in the biology of aging in all animals have begun to understand why some fruit flies live longer than others. They have documented a direct association between insulin and life span, for example, and have observed a tradeoff between prolific reproduction and longevity. A new study, which may have broad implications across species, ties those findings more closely together by tracing an insulin signaling cascade through to protein quality control in muscle tissue and shortened life span.

The central feature of the study published in the November 2013 issue of PLoS Genetics is the newly discovered role of the fruit fly equivalent of the mammalian protein complex activin. They found that it blocks the natural mechanism in muscle cells for cleaning out misfolded proteins, leading to a decline in muscle performance. In what scientists at Brown University think is no coincidence, blocking the activity of that activin equivalent, called dawdle, can lengthen a fly’s life span by as much as 20 percent, about 10 days. 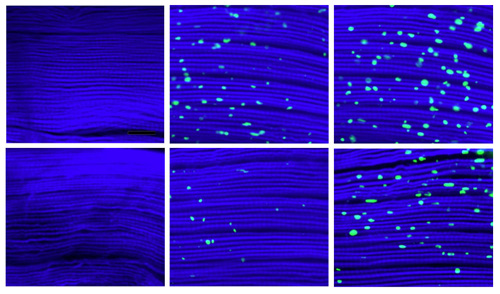 Messy muscle. More protein aggregates, shown as green specks, built up over 1, 3, and 5 weeks (left to right) in the muscle fibers of control flies (top row) compared to those in which dawdle, which hinders their cleanup, was suppressed (bottom row). Image credit: Tatar lab/Brown University

What excites the researchers is not that they can allow flies to stick around another week or two, but that the same fundamental proteins they have implicated in flies are “conserved” in evolution, meaning they also operate in mammals including humans.

“The ultimate goal of our research is to understand how certain molecular signaling pathways control aging across all species in general,” said study lead author Hua Bai, a postdoctoral researcher in the ecology and evolutionary biology lab of Marc Tatar, professor of biology at Brown. “For now this research is in fruit flies, but we think it can be extended to human aging biology. This signaling is quite conserved evolutionarily.” 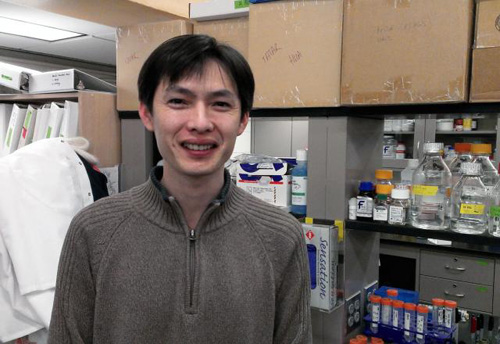 Lead author Hua Bai. “For now this research is in fruit flies, but we think it can be extended to human aging biology.” Image credit: David Orenstein/Brown University

From insulin to muscle

Bai, Tatar, and their co-authors began the study armed with the understanding that a reduction in insulin signaling lengthens fly life span because when there is less insulin there is more of a protein called dFOXO. Job one was to find out what genes relevant to life span dFOXO might be targeting.

Bai narrowed his search from hundreds of genes down to just three. He used interference RNA to suppress them and found that doing so increased life span in the flies. Suppressing dawdle (the fly version of activin) increased life span by 12 to 35 percent.

In flies, dawdle had been shown to affect neural development. In humans, one use for activin is that the brain employs it to stimulate ovarian follicles in the menstrual cycle of the female reproductive system.

But when the team went searching for where in the flies dawdle mattered to life span, their experiments showed that it was in muscle. 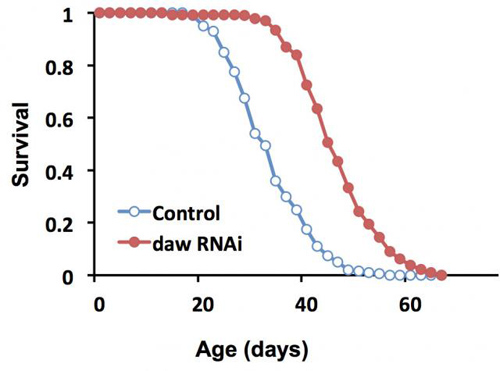 The life of flies. Flies in which expression of the protein dawdle was suppressed lived substantially longer than control flies. At about 40 days, a low percentage of control flies still lived, while a high percentage of dawdle-suppressed flies were still alive. Image credit: Tatar lab/Brown University

The researchers also found that overexpressing Atg8a in the muscle of flies lengthened life span somewhat.

In addition, the team found a potential linkage to other tissues when they discovered that suppressing dawdle also reduced insulin secretion from the insulin producing cells (IPCs) in the brains of the flies. This eventually led to a reduction in systemic insulin signaling. This completed a feedback loop in which reduced insulin signaling allows more dFOXO to suppress dawdle, in turn leading to further suppression of insulin secretion from the brain. That same process also allowed for better muscle maintenance by promoting expression of Atg8a.

Not dawdling in the lab

Bai acknowledged that the team doesn’t yet know why degraded muscle performance due to a lack of autophagy should result in reduced life span. One possibility could be that aging flies simply lose the mobility needed to compete for food. But the group has embarked on a new study of the most important muscle tissue: the heart. They are conducting experiments to examine whether the chain of events preventing autophagy affects the fruit flies’ heart pumping. In 2004 Tatar and his collaborator Rolf Bodmer connected insulin and dFOXO to fly heart performance.

Eager to see how this extends to people, the team is also looking at activin signaling and autophagy in mammalian cell cultures, Bai said.

“That’s potentially translational toward human biology,” Bai said. “If we have evidence from mammals, it could be useful for future therapeutic targets and drug design.”

In addition to Bai and Tatar, the paper’s other authors are Ping Kang and Ana Maria Hernandez.

The National Institute on Aging (grants: RO1AG024360 and R01AG031152) and the Ellison Medical Foundation funded the study.