A study by scientists at the Carnegie Institution’s Department of Global Ecology, with colleagues from the Research Center Jülich in Germany, has now overturned the conventional belief about how these important structures called stomata regulate water vapor loss from the leaf – a process called transpiration.

They found that radiation is the driving force of physical processes deep within the leaf. The research is published the week of July 12, 2010, in the on-line early edition of the Proceedings of the National Academy of Sciences.

Stomata are lip-shaped pores surrounded by a pair of guard cells that control the size of the opening. The size of the pores regulates the inflow of carbon dioxide (CO2 ) needed for photosynthesis and the outflow of water vapor to the atmosphere – transpiration.

Transpiration cools and humidifies the atmosphere over vegetation, moderating the climate and increasing precipitation. Stomata influence the rate at which plants can absorb CO2 from the atmosphere, which affects the productivity of plants and the concentration of atmospheric CO2. Understanding stoma is important for climate change research. 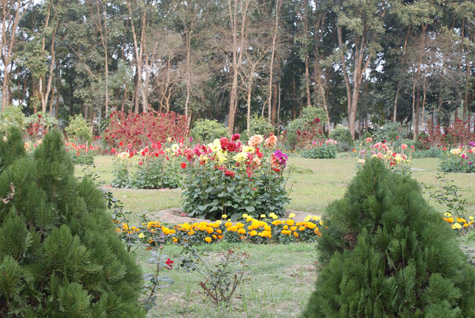 About the image above: Researchers found that ‘radiation’ is the driving force of physical processes deep within the plant leaves.

Current climate change models use descriptions of stomatal response based on statistical analysis of studies conducted with a few plant species. This approach is not based on a solid understanding of the mechanism of stomatal regulation and provides a poor basis for extrapolating to environmental conditions.

“Scientists have been studying stomata for at least 300 years. It’s amazing that we have not had good grasp about the regulatory mechanisms that control how much stomata open or close in response to a constantly changing environment,” remarked co-author Joseph Berry of Carnegie.

For the first time, these researchers looked at how the exchange of energy and water vapor at the outer surface of the leaf are linked to processes inside the leaf. They found that the energy from radiation absorbed by pigments and water inside the leaf influences how the stomata control water levels.

“In this study we illuminated a sunflower leaf with an incandescent light that was filtered to include or exclude near infrared light (NIR >700 nm),” remarked Berry. “When the near infrared light was applied, the stomata responded by opening and indirectly stimulated photosynthesis. Light of different colors gave similar stomata opening at equal energy inputs—more evidence that heat is the driver.”

The scientists replicated the experiment with five other plant species and over a range of carbon dioxide levels and temperatures. The researchers also developed a model based on energy balance of the leaf system to simulate responses. Results from the model mimicked the results from the lab.

It has been assumed that the guard cells forming the pore have sophisticated sensory and information processing systems making use of light and other environmental cues to adjust the pores. The breakthrough of this research is that it is the first to demonstrate that regulation of the rate of water loss by stomata is linked to physical processes that occur deep within the leaf.

“This means that the current model for what drives stomata to change their size has to change,” remarked co-author Roland Pieruschka, a Marie Curie Fellow from the European Union at the Carnegie Institution (currently at the Research Center Jülich in Germany).

“For a long time researchers have thought that heat from the sun, which is absorbed by pigments, moves from cell to cell until it gets to the cavities beneath the stomata where evaporation has been thought to take place. This probably happens to some degree, but the results presented here are more consistent with our hypothesis that much of this heat is transferred through air spaces inside the leaf that are saturated with water vapor. This key difference is pivotal for understanding how Otto Lange’s seminal work in the 1970s, on responses of stomata to humidity, can be fit into a leaf-scale concept of stomatal regulation.”