The Long-Term Fate of the Oil Spill in the Atlantic

Honolulu, HI – The possible spread of the oil spill from the Deepwater Horizon rig over the course of one year was studied in a series of computer simulations by a team of researchers from the School of Ocean and Earth Science and Technology (SOEST) at the University of Hawaii at Manoa.

Eight million buoyant particles were released continuously from April 20 to September 17, 2010, at the location of the Deepwater Horizon oil rig.

The release occurred in ocean flow data from simulations conducted with the high-resolution Ocean General Circulation Model for the Earth Simulator (OFES). 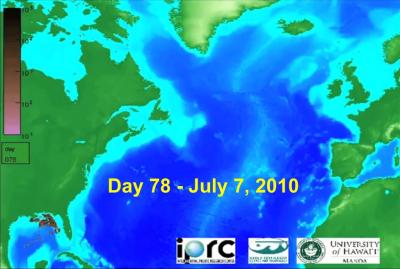 About the image above: This image shows the spread of the oil spill on Day 78 (July 7, 2010), based on simulation. Image credit: IPRC/SOEST/UHM

“The paths of the particles were calculated in 8 typical OFES years over 360 days from the beginning of the spill,” says Fabian Schloesser, a PhD student from the Department of Oceanography in SOEST, who worked on these simulations with Axel Timmermann and Oliver Elison Timm from the International Pacific Research Center, also in SOEST.

“From these 8 typical years, 5 were selected to create an animation for which the calculated extent of the spill best matches current observational estimates.”

The dispersal of the particles does not capture such effects as oil coagulation, formation of tar balls, chemical and microbial degradation. Computed surface concentrations relative to the actual spill may therefore be overestimated. The animation, thus, is not a detailed, specific prediction, but rather a scenario that could help guide research and mitigation efforts.

The animation shows the calculated surface particle concentrations for grid boxes about 10-km-by-10-km in size into April 2011. 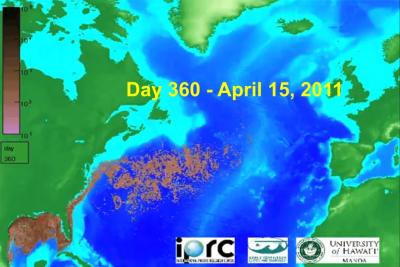 About the image above: This image shows the spread of the oil spill on Day 360 (April 15, 2011), based on simulation. Image credit: IPRC/SOEST/UHM

For an estimated flow of oil from the Deepwater Horizon of 50,000 barrels per day over a 150 day period, a concentration of e.g. 10 particles per grid box in the animation corresponds roughly to an oil volume of 2 cubic meters per 100 square kilometer.

The oil spreads initially in the Gulf of Mexico, then enters the Loop Current and the narrow Florida Current, and finally the Gulf Stream. “After one year, about 20% of the particles initially released at the Deepwater Horizon location have been transported through the Straits of Florida and into the open Atlantic,” explains Timmermann. 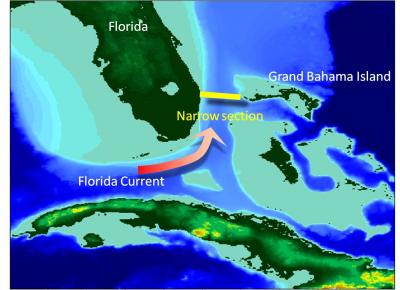 About the image above: This topographical map with a yellow bar shows the narrow section of the Straits of Florida that form a bottleneck for the Florida Current. Image credit: IPRC/SOEST/UHM

This animation suggests that the coastlines near the Carolinas, Georgia, and Northern Florida could see the effects of the oil spill as early as October 2010. The main branch of the subtropical gyre is likely to transport the oil film towards Europe, although strongly diluted.

The animation also shows that as the northeasterly winds intensify near Florida around October and November, the oil in the Atlantic moves closer to the eastern shores of the US, whereas it retreats from the western shores of Florida.