COLUMBIA, Mo. — A newly defined genre of literature, “teen sick-lit,” features tear-jerking stories of ill adolescents developing romantic relationships. Although “teen sick-lit” tends to adhere to negative stereotypes of the ill and traditional gender roles, it also explores the taboo realm of sexuality, sickness and youth, says the University of Missouri researcher who named the genre in a recent study. Readers and their parents should be aware of how the presentation of disease and disability in these stories can instill prejudices and enforce societal norms in young adults, notes the researcher.

“Teen sick-lit depicts its chronically ill protagonists, who are usually white middle-class females, merely as vehicles for well people’s emotional development rather than as self-actualized women with their own experiences, perspectives, and emotional needs,” said Julie Passanante Elman, assistant professor in women’s and gender studies in the College of Arts and Science. “As the popularity of fiction aimed at young adults, such as the Twilight, Harry Potter and Hunger Games series, continues to grow, it is important for readers and parents to note the ethical subtexts of the books. Similarly, the proliferation of sick or disabled characters on such television shows as “Glee,” “Friday Night Lights” and “Breaking Bad” doesn’t always equate to positive portrayals of those characters.” 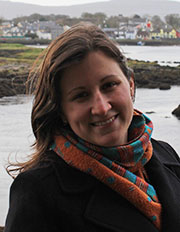 Julie Passanante Elman, assistant professor in women's & gender studies in the College of Arts and Science. Although “teen sick-lit” tends to adhere to negative stereotypes of the ill and traditional gender roles, it also explores the taboo realm of sexuality, sickness and youth, says Elman, who named the genre in a recent study. Image credit: University of Missouri

Elman found little to empower the ill in the nearly 100 “teen sick-lit” books she reviewed. Instead, the authors’ framing of their ill characters tended to set them apart as abnormal. The will to live for the sick protagonist was often equated to the desire to have a traditional heterosexual relationship, often with healthy counterparts. Characters that did not adhere to traditional gender roles tended to be ostracized or encouraged to conform. For example, one girl who lost an eye to cancer and didn’t want to wear make up because it caused an infection in her eye socket was encouraged by her peers to apply make up in a way that didn’t bother her eye. Elman believes the emphasis placed on the effects of illness on the girls’ bodies related to the importance placed on women’s sexual attractiveness by society.

“‘Teen sick-lit,’ which mostly arose in the ’80s’, stands in contrast to the progressive young adult literature of the 70s, which often dealt with issues of racism, homophobia and other injustices,” Elman said. “‘Teen sick-lit’ reinforces the idea that an individual must adjust themselves to society in order to succeed, regardless of preexisting cultural barriers, as opposed to taking action to create a more just society.”

Elman’s evaluation of teen sick-lit wasn’t entirely negative. She did find that the books acknowledged and accepted the sexuality of sick people, a subject that is usually avoided by medical dramas. Adolescent sexuality, another taboo, also was a central topic in the genre. Also, some books featured positive portrayals of the sick as fully developed characters. Some of the books portrayed sick people forming romances with other sick people, as opposed to pining for a healthy lover.

The study “‘Nothing Feels as Real’ Teen Sick-Lit, Sadness, and the Condition of Adolescence” was published in the Journal of Literary & Cultural Disability Studies.