“It appears that consuming more micronutrients such as vitamin C, E, folate and zinc helps turn back the clock for older men. We found that men 44 and older who consumed at least the recommended dietary allowance of certain micronutrients had sperm with a similar amount of DNA damage as the sperm of younger men,” says Andy Wyrobek of Berkeley Lab’s Life Sciences Division.

“This means that men who are at increased risk of sperm DNA damage because of advancing age can do something about it. They can make sure they get enough vitamins and micronutrients in their diets or through supplements,” adds Wyrobek. 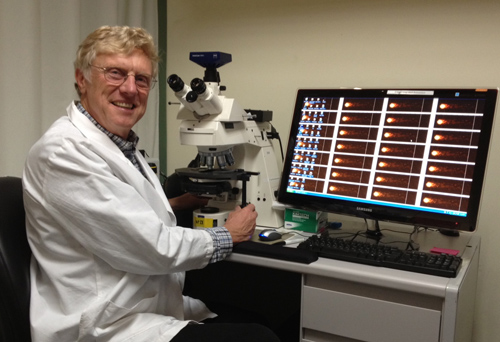 Wyrobek conducted the research with a team of researchers that includes Brenda Eskenazi of the University of California at Berkeley’s School of Public Health and scientists from the University of Bradford in the United Kingdom. They report their findings in the August 27 online issue of the journal Fertility and Sterility.

Their research comes as more men over 35 have children, which raises public health concerns. Previous research conducted in Wyrobek’s lab found that the older a man is, the more he’s likely to have increased sperm DNA fragmentation, chromosomal rearrangements, and DNA strand damage. Older men are also more likely to have increased frequencies of sperm carrying certain gene mutations, such as those leading to dwarfism. These findings help explain why aging men are less fertile and are predicted to have more chromosomally defective pregnancies and a higher proportion of offspring with genetic defects.

But until now, researchers haven’t understood whether diet can protect against the detrimental effects of aging on the sperm genome.

The scientists studied a group of about 80 men between 20 and 80 years old with an average age of 44. They were recruited several years ago as part of the California Age and Genetic Effects on Sperm Study when Wyrobek was at Lawrence Livermore National Laboratory. Each man who participated in the study filled out a 100-item questionnaire that estimated their average daily vitamin intake, both from food and supplements.

In addition, their sperm DNA quality was assessed via a lab analysis in which a voltage gradient pulls broken DNA strands from intact strands within the sperm nucleus.

The scientists analyzed the data several ways and came up with the same result each time: A diet high in antioxidants and micronutrients may decrease the risk of producing sperm with DNA damage, especially in older men.

Why this is so isn’t a mystery. Antioxidants scavenge reactive molecules that cause oxidative damage to cells. Studies have shown that dietary supplementation with antioxidants and increased consumption of antioxidant-rich fruits and vegetables can decrease the amount of oxidative DNA damage.

Based on their results, the scientists believe this same protective mechanism may also be at work in the reproductive tract of older men.

More research is needed, however. Although the scientists found a clear link between higher vitamin intake and improved sperm DNA quality in older men, they don’t know whether this link extends to male fertility and the health of offspring.

“Our research points to a need for future studies to determine whether increased antioxidant intake in older fathers will improve fertility, reduce risks of genetically defective pregnancies, and result in healthier children,” says Wyrobek. “The research also raises a broader question beyond sperm DNA: How might lifestyle factors, including higher intakes of antioxidants and micronutrients, protect somatic as well as germ cells against age-related genomic damage?”

This research was supported by the National Institute of Environmental Health Sciences.