With the help of beneficial bacteria, plants can slam the door when disease pathogens come knocking, University of Delaware researchers have discovered.

A scientific team under the leadership of Harsh Bais, assistant professor of plant and soil sciences in UD’s College of Agriculture and Natural Resources, found that when pathogens attempt to invade a plant through the tiny open pores in its leaves, a surprising ally comes to the rescue. Soil bacteria at the plant’s roots signal the leaf pores to close, thwarting infection.

The fascinating defense response is documented in video and micrographs of live plants taken by confocal and scanning electron microscopes at UD’s Bio-Imaging Center at the Delaware Biotechnology Institute.

The research, which explored the interaction between the soil bacterium Bacillus subtilis and the laboratory plant Arabidopsis thaliana, is published in the August issue of The Plant Journal. The findings underscore both the importance of root-based processes in plant defense and the potential for bolstering plant immunity naturally through the emerging field of probiotics. 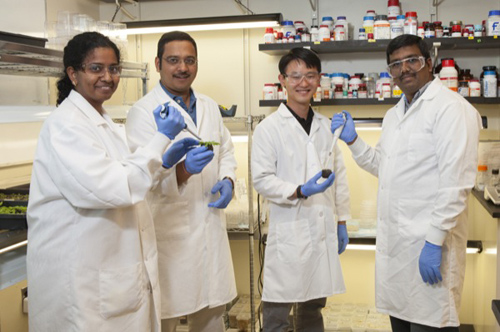 Millions of stomata, consisting of microscopic pores surrounded by guard cells, cover the above-ground parts of plants, from the stems to the flower petals. The pores resemble tiny mouths, or doors, which the guard cells open and close to allow carbon dioxide, oxygen, water and minerals in and out of the plant.

Pathogens also can slip through these stomata and begin infecting the plant. However, as Bais’s team confirmed, this invasion is halted when the beneficial bacterium Bacillus subtilis is present in the soil where the plant is rooted. The finding was based on tests of approximately 3,000 Arabidopsis plants inoculated with the foliar pathogen Pseudomonas syringae pathovar tomato DC3000 (PstDC3000) during a year-long period.

When a foliar pathogen attacks, as shown in previous research by Bais and his group, the plant recruits Bacillus subtilis to help and facilitates its multiplication. The Bacillus subtilis bacteria bind to the plant’s roots and invoke abscisic acid and salicylic acid signaling pathways to close the stomata.

At left, a magnified stomata (pore and surrounding guard cell) on a plant leaf is shown being attacked by pathogens. However, when the beneficial bacterium Bacillus subtilis is added to the plant's soil, the bacteria signal the stomata to close, cutting off the pathogens' access to the plant interior. Image credit: University of Delaware

Abscisic acid and salicylic acid are both important hormones involved in plant defense. When a plant encounters adverse environmental conditions, such as drought, for example, abscisic acid triggers the stomata to shut tightly to prevent the plant from dehydrating.

In addition to ramping up plant disease resistance, the use of this rhizobacteria to promote drought tolerance in plants could be a very promising avenue, Bais notes.

“Many bacterial pathogens invade plants primarily through stomata on the leaf surface,” Bais says. “But how do plants fight off infection? In our studies of the whole plant, we see this active enlistment by Bacillus subtilis, from root to shoot.” 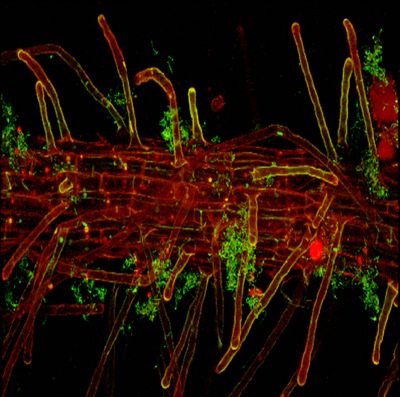 Bacillus subtilis, a bacterium that lives in soil, appears in bright red amid the roots of the plant Arabidopsis. In the next photo, see what happens when the plant is under attack. Image credit: University of Delaware

Strikingly, the research team’s data revealed that of different root-associated soil bacteria tested, only Bacillus species were effective in closing the stomata and for a prolonged period.

“We know only 1 to 5 percent of what this bug Bacillus subtilis can do, but the potential is exciting,” Bais notes, pointing out that there is increasing commercial interest in inoculating crop seeds with beneficial bacteria to reduce pathogen infection. “Just as you can boost your immune system, plants also could be supercharged for immunity.” 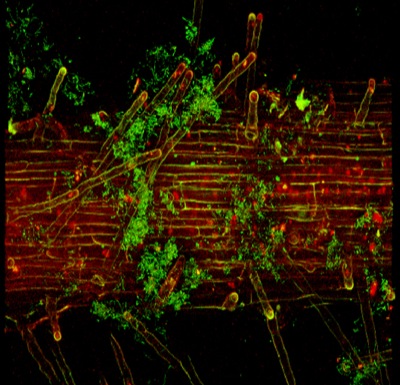 In this photo, the plant is under attack by pathogens at the leaf surface. Note the increased numbers of Bacillus subtilis that now appear (in red) on the Arabidopsis roots. These beneficial bacteria have come to the plant's defense and will help signal the leaf pores (stomata) to close, preventing pathogens from invading. Image credit: University of Delaware