Neil A. Armstrong, the first man to walk on the moon, was born in Wapakoneta, Ohio, on August 5, 1930. He began his NASA career in Ohio.

After serving as a naval aviator from 1949 to 1952, Armstrong joined the National Advisory Committee for Aeronautics (NACA) in 1955. His first assignment was with the NACA Lewis Research Center (now NASA Glenn) in Cleveland. Over the next 17 years, he was an engineer, test pilot, astronaut and administrator for NACA and its successor agency, the National Aeronautics and Space Administration (NASA).

As a research pilot at NASA’s Flight Research Center, Edwards, Calif., he was a project pilot on many pioneering high speed aircraft, including the well known, 4000-mph X-15. He has flown over 200 different models of aircraft, including jets, rockets, helicopters and gliders.

Armstrong transferred to astronaut status in 1962. He was assigned as command pilot for the Gemini 8 mission. Gemini 8 was launched on March 16, 1966, and Armstrong performed the first successful docking of two vehicles in space.

As spacecraft commander for Apollo 11, the first manned lunar landing mission, Armstrong gained the distinction of being the first man to land a craft on the moon and first to step on its surface.

Armstrong subsequently held the position of Deputy Associate Administrator for Aeronautics, NASA Headquarters, Washington, D.C. In this position, he was responsible for the coordination and management of overall NASA research and technology work related to aeronautics.

He was Professor of Aerospace Engineering at the University of Cincinnati between 1971-1979. During the years 1982-1992, Armstrong was chairman of Computing Technologies for Aviation, Inc., Charlottesville, Va.

He was a member of the National Academy of Engineering and the Academy of the Kingdom of Morocco. He served as a member of the National Commission on Space (1985-1986), as Vice-Chairman of the Presidential Commission on the Space Shuttle Challenger Accident (1986), and as Chairman of the Presidential Advisory Committee for the Peace Corps (1971-1973).

Armstrong passed away on Aug. 25, 2012 following complications resulting from cardiovascular procedures. He was 82. August 2012 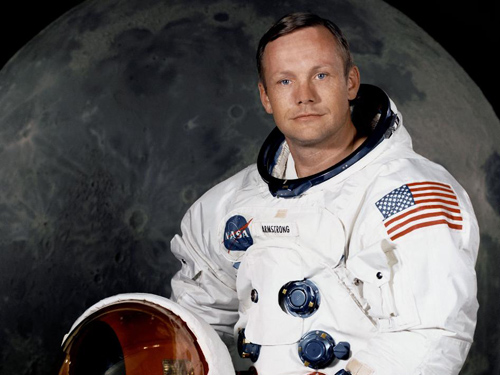 Portrait of Astronaut Neil A. Armstrong, commander of the Apollo 11 Lunar Landing mission in his space suit, with his helmet on the table in front of him. Behind him is a large photograph of the lunar surface. Image Credit: NASA 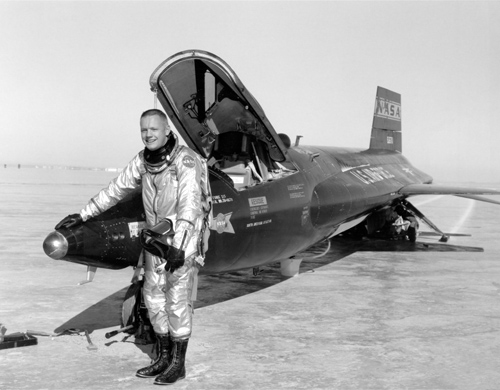 During re-entry from flight training at 207,000 feet in an X-15-3, Neil Armstrong inadvertently established a positive angle of attack during pull-out, and overshot Edwards Air Force Base in California, heading south at Mach 3 and 100,000 feet altitude. He finally managed to turn back while over the Rose Bowl in Pasadena, and had just enough energy to land on the south end of Rogers Dry Lake at Edwards. In the debriefing, someone asked how much clearance the X-15 had from the Joshua trees on the edge of the lakebed. “Oh, at least 100 feet…on either side,” said the chase pilot. Image Credit: NASA 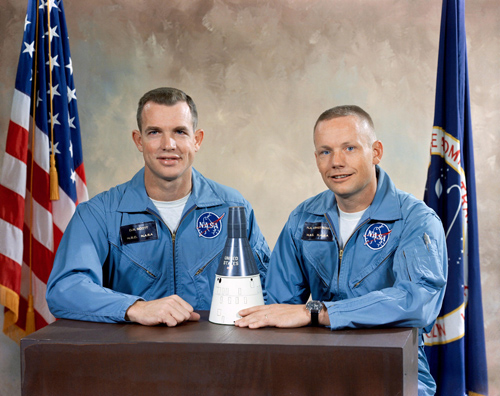 Astronauts David R. Scott (left), Pilot; and, Neil A. Armstrong (right), Command Pilot, pose with model of the Gemini Spacecraft after being selected at the crew for the Gemini VIII mission. Image Credit: NASA 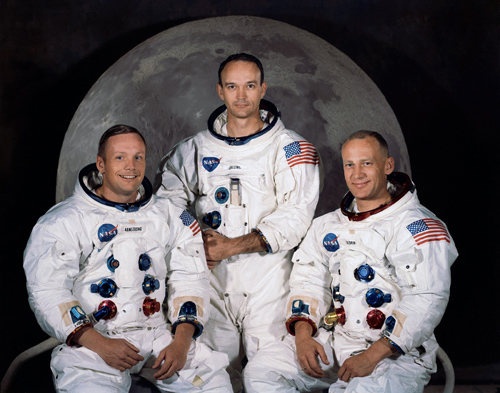 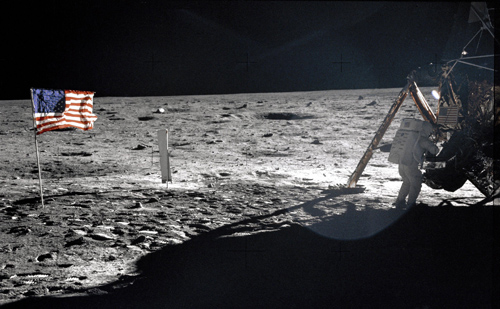 Apollo 11 astronauts trained on Earth to take individual photographs in succession in order to create a series of frames that could be assembled into panoramic images. This frame from Aldrin’s panorama of the Apollo 11 landing site is the only good picture of mission commander Neil Armstrong on the lunar surface. Image Credit: NASA 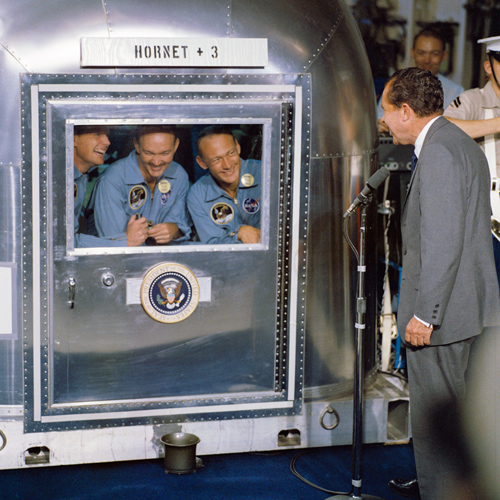 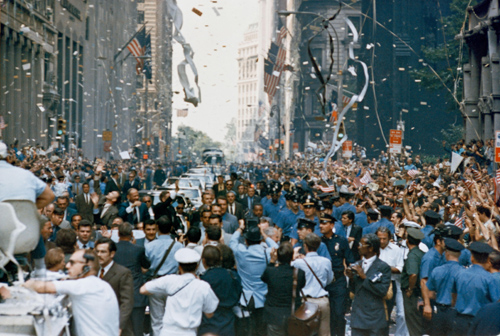 New York City welcomes the Apollo 11 crew in a ticker tape parade down Broadway and Park Avenue. Pictured in the lead car, from the right, are astronauts Neil A. Armstrong, Michael Collins and Buzz Aldrin. The three astronauts teamed for the first manned lunar landing, on July 20, 1969. Image Credit: NASA 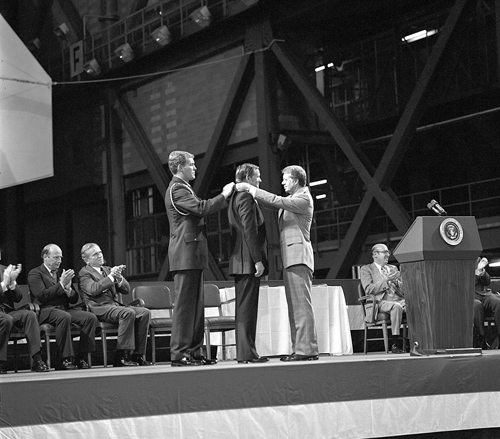 Astronaut Neil Armstrong received the first Congressional Space Medal of Honor from President Jimmy Carter, assisted by Captain Robert Peterson. Armstrong, one of six astronauts to be presented the medal during ceremonies held in the Vehicle Assembly Building, was awarded for his performance during the Gemini 8 mission and the Apollo 11 mission when he became the first human to set foot upon the moon. Armstrong died on Aug. 25, 2012, at the age of 82. Image Credit: NASA