EAST LANSING, Mich. — The rate of workplace deaths in Michigan remained steady in 2011, as 141 workers died on the job compared with 145 in 2010, according to an annual report from Michigan State University.

The construction industry had the most deaths at 24, while the agriculture industry had the second most at 22, according to the Michigan Fatality Assessment and Control Evaluation program, or MIFACE.

The program – administered by MSU’s Division of Occupational and Environmental Medicine, part of the College of Human Medicine – investigates work-related deaths and seeks to identify ways to prevent them. 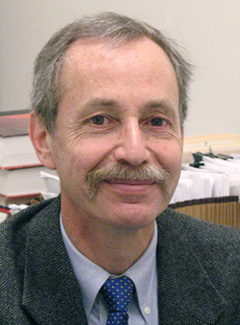 Kenneth Rosenman, chief of the Division of Occupational and Environmental Medicine in MSU's College of Human Medicine. Photo courtesy of Department of Medicine

“While we are always encouraged that fatality rates are not rising, one death is too many,” said Kenneth Rosenman, director of MSU’s Division of Occupational and Environmental Medicine. “Workplace deaths are almost always avoidable, and there is no reason we shouldn’t be seeing a decrease in deaths.”

Also troubling is new research from Rosenman that shows a vast underreporting of workplace burns in Michigan, with a new surveillance system showing three times more burn-related injuries than was reported by employers to the U.S. Bureau of Labor Statistics in 2009.

That research, published in the Journal of Occupational and Environmental Medicine, was based on a new multisource system created specifically for work-related burns. For 2009, records were obtained from Michigan’s 134 hospitals, the Workers’ Compensation Agency, the state’s sole Poison Control Center and death certificates.

“Surveillance is a basic premise of public health,” Rosenman said. “We need an accurate counting of the magnitude of a condition to determine the amount of resources to devote to the problem, to plan interventions and to evaluate the effectiveness of these interventions.”

Back to the MIFACE report, the annual survey also revealed that falls and motor vehicle accidents caused the most deaths (23 each), followed by machine-related injuries and homicide. Guns were involved in 75 percent of all workplace homicides.

The 2011 MIFACE report is being released as the nation prepares to mark Workers Memorial Day on April 28. Workers and public health professionals across the country pay tribute to those killed by work-related trauma – about 5,000 each year nationwide. Another 60,000 U.S. workers are estimated to die each year from cancer, lung disease and other illnesses from work-related exposures. 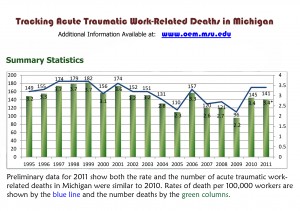 The chart from researchers at MSU's Division of Occupational and Environmental Medicine shows the number of and rate of worker deaths in Michigan since 1995. Image credit: Michigan State University

A Worker Memorial Day remembrance will be held at noon April 26 at Wentworth Park in Lansing. Speaking at the event will be Martha Yoder, director of the Michigan Occupational Safety and Health Administration; Karla Swift, president of the AFL-CIO Michigan Chapter; Norwood Jewell, director of the UAW Region 1C; and Deb Chester, project coordinator for MIFACE. In case of rain, the event will be at the UAW Local 652 Hall on Clair Street in Lansing.

A remembrance in Detroit is set for 2 pm. April 28 at the UAW’s Ford National Projects Center, 151 E. Jefferson Ave.

MIFACE is a research project of MSU funded by the Centers for Disease Control and Prevention; MSU works closely with the Michigan Occupational Safety and Health Administration on the project. For more information, go to the MIFACE section on the MSU Occupational and Environmental Medicine website at www.oem.msu.edu.