A one-inch long grasshopper can leap a distance of about 20 inches. Cicadas can produce sound at about the same frequency as radio waves. Fleas measuring only millimeters can jump an astonishing 100 times their height in microseconds. How do they do it? They make use of a naturally occurring protein called resilin.

Resilin is a protein in the composite structures found in the leg and wing joints, and sound producing organs of insects. Highly elastic, it responds to exceptionally high rates of speed and demonstrates unmatched resilience after being stretched or deformed.

Kristi Kiick, professor of materials science and engineering and biomedical engineering at the University of Delaware, believes this unusual protein may also be a key to unlocking the regenerative power of certain mechanically active tissues.

Through support from the National Science Foundation and the National Institutes of Health (NIH), the Kiick research group has developed new cell-interactive resilin-like materials that have mechanical properties similar to the natural protein and that are engineered to support the growth of multiple types of cells.

Kiick has teamed with Xinqiao Jia, associate professor of materials science and engineering and biomedical engineering, to explore the potential of these resilin-like materials for treating vocal fold disorders in humans. 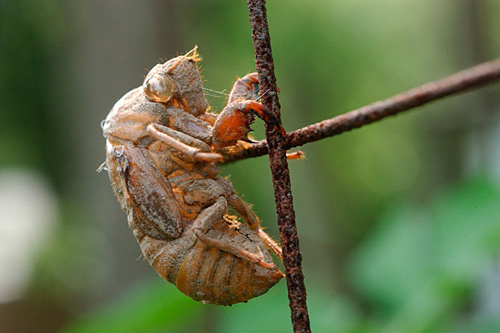 UD researchers are developing new materials, modeled after the protein resilin found in insects such as the cicada, which may be useful in treating vocal fold disorders. Photo by Duane Perry

Vocal folds vibrate more than 100 times a second at very high frequencies, enabling humans to form words and speak. Damaged vocal folds can impair voice production, resulting in an expensive health care problem. According to NIH estimates, the societal cost of voice problems in teachers alone is on the order of $2.5 billion annually in the United States.

Development of new materials to treat vocal fold disorders, however, have been hampered by the stringent mechanical requirements of the vocal fold, which include the ability to both sustain deformation at frequencies as high as 1,000Hz, and also to completely recoil after stretching up to 200 percent.

Through the support from National Institute on Deafness and Other Communication Disorders (NIDCD), the Jia research group has made significant progress towards engineering artificial vocal folds via the strategic combination of multipotent cells, biomimetic and bioactive hydrogel matrices and external high frequency vibratory stimulations.

Sophisticated equipment, such as a torsional wave apparatus, has enabled her group to analyze the mechanical properties of various vocal fold tissues and the replacement materials at phonation frequencies. 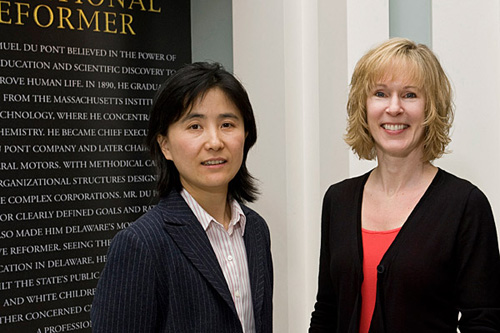 To complement this work, Kiick’s research group has developed a new polypeptide hydrogel that displays characteristics and capabilities similar to its natural resilin counterpart. The hydrogel not only mimics the mechanical properties of naturally occurring resilin, it has also been engineered to contain modules that support cell adhesion and permit degradation, important factors in permitting the growth of native tissue into the gel.

A critical element of the project is the collaborative work of the Kiick and Jia groups, which “will enable us to design new materials, develop methods to characterize and culture materials at high frequencies, and then test this new class of materials for healing vocal fold tissue,” explained Kiick, principal investigator on the NIH grant funding the work.

Now, Kiick and Jia are studying these materials to determine if they can be used in vocal fold regeneration. The research team plans to culture human mesenchymal stem cells (hMSCs), taken from the bone marrow of adult patients, in these matrices under vibrations like those experienced in the vocal fold to determine if the cells become the kinds of cells found in the vocal fold. They will also investigate whether the cell-gel matrices exhibit biochemical and mechanical properties like those of healthy vocal fold tissue.

As a final step, the researchers will work in collaboration with vocal fold specialists Susan Thibeault and Timothy McCulloch, at the University of Wisconsin Madison, to test the ability of these new materials as injectable therapies to heal vocal fold scarring in laboratory models.

“In addition to their potential use for vocal fold disorders, we are excited that these novel polypeptides may ultimately be useful as a general platform in the design of materials for mechanically demanding regenerative medicine applications,” added Kiick.