Software You Can Eat: College Students Build Tool to Feed the Hungry

A team of Arizona State University Students won the U.S. Imagine Cup’s Software Design category with a program that takes uneaten restaurant and catered event meals and reroutes it to nearby families that would otherwise go without.

REDMOND, Wash. — A team of students from Arizona State University aims to use Microsoft technology to get uneaten meals from restaurants and catered events to nearby families who would otherwise go hungry.

Team FlashFood with its solution, FlashFood, was the winning team in the prestigious software design category at Microsoft’s U.S. Imagine Cup finals on Monday. The team will advance to compete in the Imagine Cup 2012 Worldwide finals in Sydney, Australia July 6-10.

In the U.S. Imagine Cup’s two gaming categories, the Drexel Dragons from Drexel University won in the Windows Phone game design competition for making a game that teaches elementary school students math, and the team Dr. Fishbowl from Carnegie Mellon University won the Xbox game design competition for creating a game that teaches players about sustainability and how to be responsible for byproducts and waste. LegenDairy, a team from Brigham Young University, won a special new U.S. Windows Azure award for its agriculture cloud computing solution.

All of the 74 students in the competition also received an Acer laptop (loaded with the Windows 8 Consumer Preview) and a Nokia Lumia 800 Windows Phone, courtesy of sponsors Acer and Nokia.Shortly after winning the software design category, students from FlashFood used the words “excited,” “ecstatic,” “elated” and “stunned” to describe their victory.

“It was a lot of anxiety,” says team member Jake Irvin. “I was telling myself that even if we didn’t win first place, we did a really good job, and Microsoft has treated us really well. We really wanted to win, but we knew if we didn’t win, we’d still made it a long way and we talked to a lot of great people at Microsoft.” 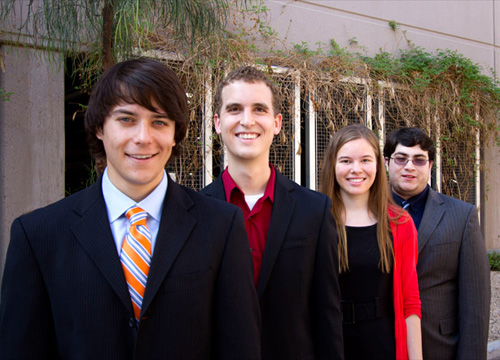 Essentially their tool would make sure surplus perishable food generated by businesses, restaurants and caterers finds its way to hungry families. The tool would help businesses make tax deductible donations of their surplus food to a nonprofit that could – using web applications, smart phones and volunteer drivers – transport that food to those who need it.

The team hopes to address “food deserts,” or areas in a city or community that are both low-income and a mile or farther from a grocery store where people have healthy food options. Given limited options, people will choose more expensive and less healthy fast food or food from convenience stores, or may also just go hungry, they say.

“There is food to feed these people, it’s just a distribution issue,” Irvin says. “We’re looking at ways to bring healthier food into these communities. That’s part of the reason we’re focusing on perishable food, not only to fight food waste, but because it tends to be healthier than canned or non-perishable food.” 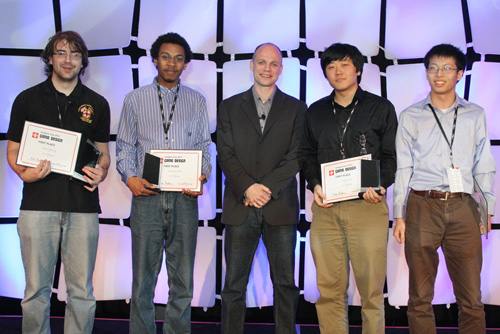 Team Dr. Fishbowl – Game Design Winners. Team Dr. Fishbowl won first place in the Game Design: Xbox category. By learning to take advantage of their resources, and by taking responsibility for byproducts and waste and finding use for them, players of this game demonstrate a model of sustainability that doesn’t have to compromise between being responsible and being profitable. Image credit: Microsoft

Team FlashFood got its start in August when Irvin, along with teammates Eric Lehnhardt, Katelyn Keberle and Steven Hernandez (who competed in last year’s Imagine Cup), were looking for a school project that would let them use their engineering and technology skills to identify and solve a community problem, Keberle says.

The team zeroed in on bridging two separate but related issues – businesses with surplus but perishable food, and hunger. Traditionally food banks and other community organizations can’t use perishable food donations because they can’t distribute the food fast enough. But what if technology could help change that?

“We started to get the idea that using rapid digital communications, including smart phones, websites and text messaging, we could coordinate the kind of rapid delivery that hasn’t been possible before,” Lehnhardt says.

The students say that while they were working on the project, their teammate Hernandez encouraged them to consider entering it in the Imagine Cup. The team read up on the competition and found that they shared the same mission as Microsoft’s competition – in short, using technology to solve real-world problems and make the world better place. 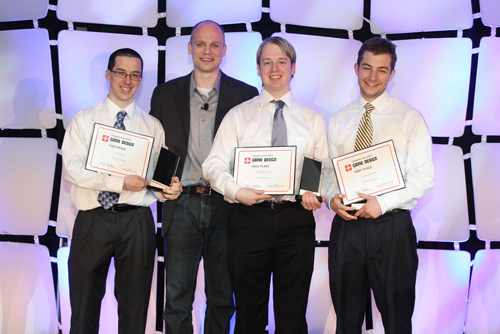 Microsoft had more than 113,000 students register for the 2012 U.S. Imagine Cup, and 22 teams traveled to Microsoft’s Redmond campus this weekend for the final competition. Now in its 10th year, the Imagine Cup has grown substantially in its first decade but it’s only the beginning, says Mark Hindsbo, vice president of Microsoft’s U.S. Developer and Platform Evangelism Group.

“The first year there were 2,000 applicants. We’re creating a hockey stick effect – it keeps getting bigger and better,” Hindsbo says. “Every year I go in thinking, ‘This can’t be better than last year,’ and every year I get surprised and amazed again. The students are all at the cutting edge of adoption, whether cloud computing, mobile or Kinect.”

Hindsbo said the Imagine Cup inspires young people to find creative, technology-driven solutions to some of the toughest problems in their communities and the world, from hunger to healthcare.

He hopes the growth and the momentum of Imagine Cup will inspire others to participate, as doing so will help them learn real-world skills they need to help them get high-end computing jobs. More than 800,000 tech industry jobs will be created by 2016, a demand that will be tough to meet in the United States given the shortage of students studying in science, technology, engineering and math in the country.

In addition to the competition becoming bigger, it is also attracting teams of multi-disciplinary students, not just those focused on computer science and engineering. There are now medical students, graphic artists, musicians, business and marketing students, and more represented among the teams.

“My biggest goal is that this is not just a fabulous experience for the students that compete, but that each team inspires 10 new students that might not have thought of pursuing a career in science or technology to pursue a career,” Hindsbo says. “That would be the ultimate dream.”