ANN ARBOR, Mich.— A smart filter with a shape-shifting surface can separate oil and water using gravity alone, an advancement that could be useful in cleaning up environmental oil spills, among other applications, say its University of Michigan developers.

The system could provide a more efficient way to remove crude oil from waterways without using additional chemical detergents, or even after detergents have been added, said Anish Tuteja, an assistant professor of materials science and engineering. Tuteja is the corresponding author of a paper on the research published in the Aug. 28 issue of Nature Communications.

The researchers created a filter coating that repels oil but attracts water, bucking conventional materials’ properties. Most natural substances soak up oil, and the few that repel it also repel water because water has a higher surface tension.

“Our material operates in a counterintuitive way,” Tuteja said. “Water spreads on its surface, while the oil beads up. It’s hydrophilic, so it loves water, and oleophobic, so it hates oil.”

The new coating is a blend of a rubbery, commercially-available polymer and a novel nanoparticle. The polymer can readily form hydrogen bonds with water. The nanoparticle, developed by project collaborators at the Air Force Research Laboratory, is very low in surface energy and does not get wet by oil.

About the video: A smart filter with a shape-shifting surface can separate oil and water using gravity alone, an advancement that could be useful in cleaning up environmental oil spills, among other applications, say its University of Michigan developers.

In their experiments, the researchers dipped postage-stamp-size pieces of stainless steel window screen and polyester fabric into their solution. Then they cured the coated snippets under ultraviolet light. Meanwhile, they made four different types of oil/water mixtures, including emulsions with various ratios of water and canola oil. Emulsions, like mayonnaise, are mixtures of liquids that can be difficult to separate.

When the researchers passed the mixtures through the coated filters, they found that with 99.9 percent efficiency, they could separate free oil and water, oil-in-water emulsions, water-in-oil emulsions, and any combination of these blends.

“This is one of the cheapest and most energy efficient ways to separate oil and water mixtures,” Tuteja said. “It has never been demonstrated before.”

“We’ve shown that, even when you add surfactants and dispersants to the mixture, as was done in the Deepwater Horizon oil spill, we can efficiently separate the oil from the water. The important thing is that we don’t need any additional chemicals or high-pressure sources. We can do it with gravity alone.” 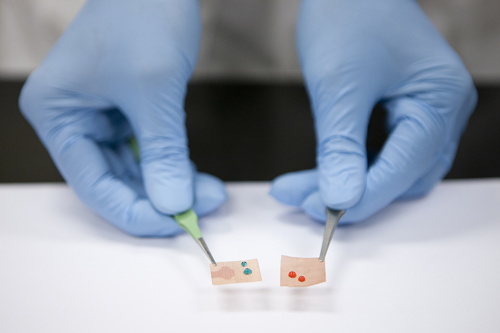 Researchers have developed a special filter coating that essentially can strain oil out of water. It works by repelling oil, but attracting water, which are unconventional properties for a material to have. On an untreated piece of window screen, water (dyed blue) beads up, but oil (dyed pink) soaks through. On the treated surface, the pink oil beads up, but water would soak through. The coating could help advance oil spill clean-up and make it more efficient. Photo by Laura Rudich

Tuteja says these results were at first surprising, and they’re possible because of a particularly nifty property of the new coating. When it is exposed to water, the polymer and the nanoparticle components scamper into a different configuration—one that encourages the water molecules to bond with the polymer.

“The polymer, in essence, reaches up during surface reconfiguration through the filter and wicks more water across, while the oil remains above the filter,” said Arun Kota, a postdoctoral researcher in materials science and engineering and the first author of the paper. 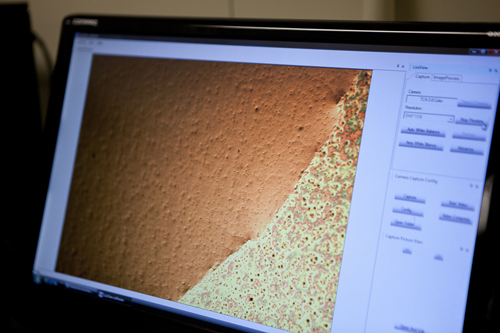 When viewed through a microscope, the surface reconfiguration of the coating becomes apparent. The coating becomes smoother when exposed to water, enabling polymers in the coating to bond with water and pull it through the filter, while oil remains on top. Photo by Laura Rudich

The coating creates a smart filter that lets only the water through. It accomplishes this by taking advantage of both gravity and the capillary action phenomenon that enables liquids to defy gravity in narrow enough spaces. It uniquely exploits differences in the capillary action behaviors of oil and water, the researchers said.

They were able to use their coated filters for more than 100 hours without clogging—a vast improvement over today’s technology. In addition to oil-spill clean-up, the technology could be used in wastewater treatment, oil purification for fuel applications, and in the cosmetics industry.

The work is funded by the Air Force Office of Scientific Research. The university is pursuing patent protection for the intellectual property, and is seeking commercialization partners to help bring the technology to market. 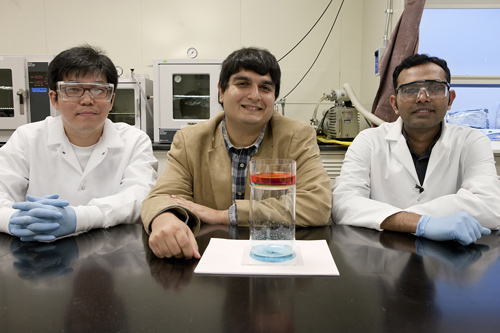 Doctoral student Gibum Kwon, postdoctoral researcher Arun Kota and assistant professor Anish Tuteja, all in in materials science and engineering, have developed a filter coating that can separate oil and water with gravity alone and lead to more energy-efficient oil spill clean-up, among other applications. Photo by Laura Rudich

The paper is titled, “Hygro-responsive membranes for effective oil-water separation.”