Oil Exploration Would Endanger The Most Biodiverse Region in The Western Hemisphere, Say Scientists

AUSTIN, Texas — An international team of scientists that includes two University of Texas at Austin researchers has found that Ecuador’s Yasuní National Park, which sits on top of massive reserves of oil, is in the single most biodiverse region in the Western Hemisphere.

The announcement is part of a final push for the Yasuní-ITT Initiative at the United Nations General Assembly. The initiative proposes that Ecuador receive compensation for half of the revenues the nation would lose by protecting the estimated 846 million barrels of oil that lie beneath the forest.

President Rafael Correa has said he will have to withdraw the offer and allow oil exploitation to advance in the park if Ecuador does not receive at least $100 million by December. Ecuador would ultimately like to be compensated for half of the estimated $7.2 billion the country could reap from leasing oil rights over the next 13 years. 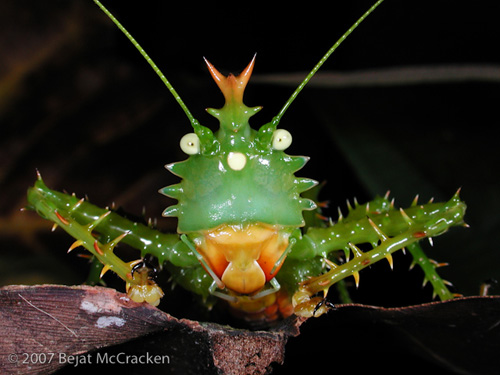 Crowned like a king, the spike-headed katydid, Panacanthus cuspidatus, is one of projected 100,000 insect species in Yasuni. Image credit: Bejat McCracken

The money would go to the Yasuní Ishpingo Tambococha Tiputini (ITT) Trust Fund, which would be overseen by a UN commission and would fund conservation, reforestation, renewable energy, research and social programs for the region’s people.

The scientific team has produced a map that highlights the unique biodiversity of Yasuní National Park, which is the only place on the planet that is known to contain “peak diversity” of plants, birds, mammals and amphibians.

“There are more bird species in a few hundred acres of Yasuní than one could expect to find in the entire state of Texas,” said Peter English, a lecturer in the School of Biological Sciences. “The ecology of many of these species is still a mystery. The world needs to act decisively with the fate of the park being decided this December.” 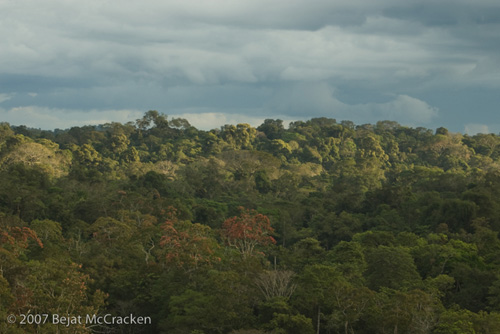 English and Anthony Di Fiore, associate professor of anthropology, cataloged the primate and bird diversity of the region.

Other members of the 13-scientist team identified more species of frogs, toads and trees in an average hectare of the forest than are native to the United States and Canada combined. The scientist responsible for calculating insect biodiversity projected that a single hectare of Yasuní contains 100,000 insect species, which is the highest estimated diversity per unit area in the world for any plant or animal group.

“There is really no other place in the Western Hemisphere where such tremendous numbers of vertebrate and plant species coexist,” said Di Fiore.

So far about half of the $100 million has been pledged, including $50 million from the Italian government, smaller amounts from the governments of Turkey, Australia, Colombia and Peru, and many private donations, including one year’s salary from a vice president of the Royal Bank of Canada.

English just returned from Ecuador, where he represented the Yasuní-ITT Initiative at a conference on protecting biodiversity in the Ecuadorian Amazon.