New Computer Programme Promises To Save The Whales

Researchers at the University of Montreal have developed a computer programme that enables regulators to evaluate the ecological and economic tradeoffs between marine mammal conservation, whale watching and marine transportation activities in the Saint Lawrence Estuary.

“The objective is to reduce the collision risk with whales while taking into account the impact on industry and marine transportation,” said Lael Parrott, who headed the research team. The model, developed in her Complex Systems Laboratory, maps the estuary where the field research was undertaken, simulates the comings and goings of five mammal species (minke whale, fin whale, beluga, humpback and blue whale), the presence and movements of three types of boats (recreation, excursion and cargo), and environmental conditions. Nine scenarios were elaborated in order to observe the effects of various decisions. 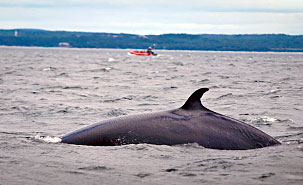 Researchers at the University of Montreal have developed a computer programme that enables regulators to evaluate the ecological and economic tradeoffs between marine mammal conservation, whale watching and marine transportation activities in the Saint Lawrence Estuary. Image credit : University of Montreal

The system was developed following a request from Parks Canada and Fisheries and Oceans Canada. It is based on real conditions observed in the estuary since 1994 and takes into account human behaviors based on interviews with captains and shipping pilots.

In 1998, the majority of the Saguenay Fjord in Quebec and a part of the St. Lawrence Estuary at the junction of the Saguenay River were given the status of marine park to protect the exceptional biological diversity of this area where fresh and salt water meet.

In all, no less than 13 species of marine mammals rely on these waters for food and almost half are endangered. More than 10,000 boat excursions occur every year to see the thousand or so fin, minke, beluga, humpback and blue whales that swim the waters. 5,000 cargo ships also cross the marine park annually en route to the St-Lawrence Seaway.

In 2002, the park adopted a series of norms and regulations to limit the speed of excursion boats, the distance between boats and whales, and the maximum amount of time a whale can be observed. The objective was to reduce the stress of tourism on the whales while at the same time maintaining a viable whale watching industry. 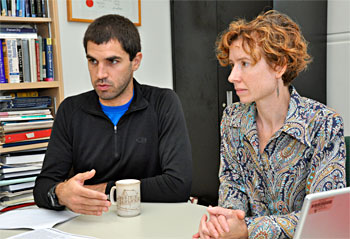 New measures are expected to come into effect in 2012 and their success relies on the cooperation of boat captains and on understanding the complex dynamic between the various elements at play, such as the number of boats and whales, where each of them travel, the currents, the tides, the weather, human factors, and the economic imperatives of cargo ships.

The whales swim in high concentrations off the shores between Les Escoumins and Tadoussac, Qué., where they go to feed from a large marine cavity. Les Escoumins is where cargo ships arriving from the Atlantic Ocean approach the shoreline to let the seaway pilots come aboard and take control of the ship.  Ships then transit the park, directly through the whale’s main foraging grounds.

“There is little data on the number of collisions because pilots aren’t always aware of colliding with a whale and because the carcasses sink,” says Clément Chion, a PhD student who developed part of the model as part of his thesis. “But many quasi-collisions are reported and these accidents are a threat to the recovery of certain species. To reduce the risk, we can play on two factors: the speed of the cargo ships and their trajectory.”

The speed limit in the marine park is 25 knots (46 km/h). At this speed, 100 percent of collisions are fatal. “Speed must be limited to 10 knots to reduce the mortality rate to below 35 percent,” says Chion. 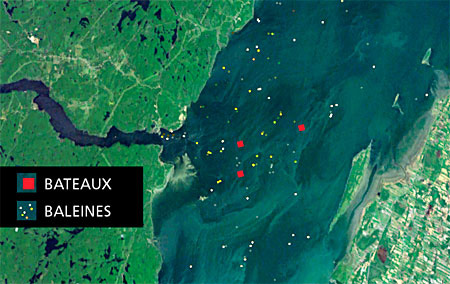 Another option is to impose a three-kilometer southbound detour to cargo ships so they avoid going along the north coast and through the park. However, this scenario would reduce the risk of collisions in the marine park while increasing the risk for belugas that swim in the center of the river and close to the south coast. The population of beluga whales is very fragile, as the pod hasn’t fully recovered from old hunting practices that were outlawed in the 1970s. The model developed by Parrott’s team can help evaluate and quantify these kinds of tradeoffs.

The tool is therefore very useful to help decision-makers adopt new rules and regulations. Marine Park and Fisheries and Oceans authorities, who participated in conceptualizing the system, are very satisfied with the results to date. Parrott’s team continues its work to add data to the model, to further refine its predictions.