*One youngster only six times heftier than Jupiter*

TORONTO, ON – A University of Toronto-led team of astronomers has discovered over two dozen new free-floating brown dwarfs, including a lightweight youngster only about six times heftier than Jupiter, that reside in two young star clusters. What’s more, one cluster contains a surprising surplus of them, harbouring half as many of these astronomical oddballs as normal stars.

“Our findings suggest once again that objects not much bigger than Jupiter could form the same way as stars do. In other words, nature appears to have more than one trick up its sleeve for producing planetary mass objects,” says Professor Ray Jayawardhana, Canada Research Chair in Observational Astrophysics at the University of Toronto and leader of the international team that made the discovery.

Brown dwarfs straddle the boundary between stars and planets. Sometimes described as failed stars, they glow brightly when young, from the heat of formation, but cool down over time and end up with atmospheres that exhibit planet-like characteristics. Scientists think that most brown dwarfs may have formed like stars, in isolation from contracting gas clouds, but some of the puniest free-floaters may have formed like planets around a star and later ejected. 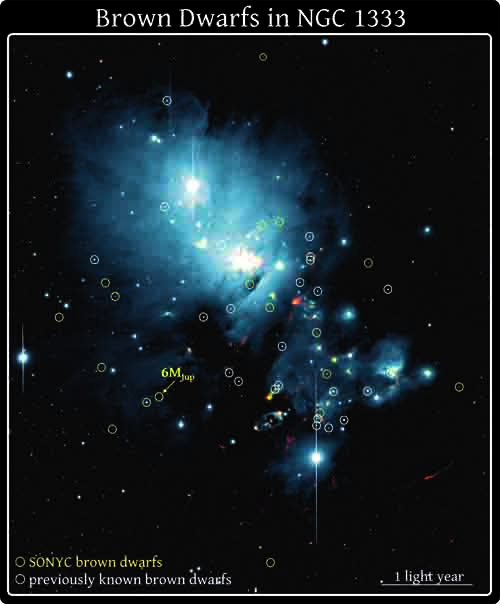 The findings come from observations using the Subaru Telescope in Hawaii and the Very Large Telescope (VLT) in Chile during the Substellar Objects in Nearby Young Clusters (SONYC) survey. Astronomers took extremely deep images of the NGC 1333 and rho Ophiuchi star clusters with Subaru at both optical and infrared wavelengths. Once they identified candidate brown dwarfs from the very red colors, the research team confirmed them with spectra taken at Subaru and the VLT. The team’s findings will be reported in two upcoming papers in the Astrophysical Journal and presented this week at a scientific conference in Garching, Germany.

The six-Jupiter-mass brown dwarf found in the NGC 1333 cluster is one of the least massive free-floating objects known. “Its mass is comparable to those of giant planets, yet it doesn’t circle a star. How it formed is a mystery,” said Aleks Scholz of the Dublin Institute of Advanced Studies in Ireland, lead author of one paper and a former postdoctoral fellow at the University of Toronto. Several other newly identified brown dwarfs in both NGC 1333 and rho Ophiuchi clusters have masses below 20 times that of Jupiter. 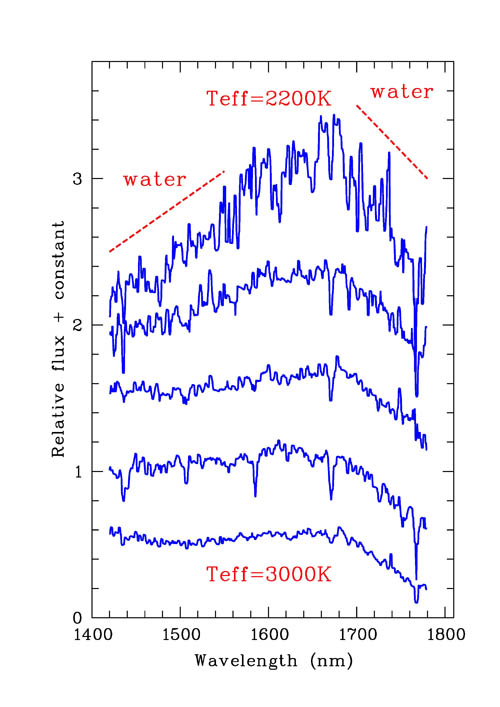 Spectra of several brown dwarfs in the young star cluster NGC1333, taken with FMOS instrument on the Subaru Telescope. The spectra show a characteristic peak around 1670nm. Water steam in a brown dwarf's atmosphere absorbs radiation on both sides of the peak. The plot shows that the strength of the water absorption increases in cooler objects (from 3000 to 2200K). FMOS allows astronomers to take spectra for many objects simultaneously, a crucial advantage for the SONYC Survey. Image credit: SONYC Team/Subaru Telescope

“Brown dwarfs seem to be more common in NGC 1333 than in other young star clusters. That difference may be hinting at how different environmental conditions affect their formation,” says University of Toronto’s Koraljka Muzic, lead author of the second paper.

”We could not have made these exciting discoveries if not for the remarkable capabilities of Subaru and the VLT. Instruments that can image large patches of the sky and take hundreds of spectra at once are key to our success,” said co-author Motohide Tamura of the National Astronomical Observatory of Japan.

Other co-authors of the two papers are Vincent Geers of ETH Zurich in Switzerland, also a former U of T postdoc, and Mariangela Bonavita of the University of Toronto.