The 1977 discovery of deep-sea hydrothermal vent ecosystems that obtain energy through chemosynthesis rather than photosynthesis greatly expanded the perception of life on Earth. However, an understanding of their underlying microbiology and biogeochemistry still remains elusive. 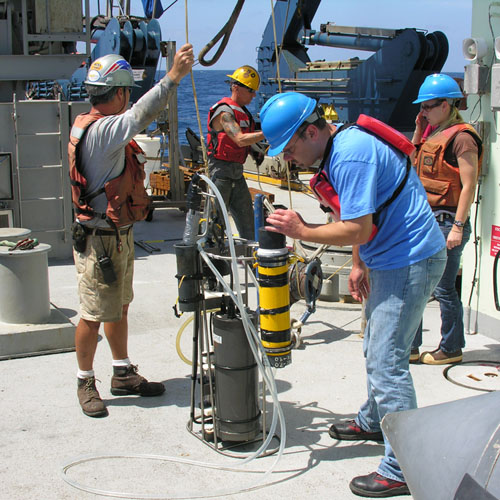 Stefan Sievert prepares to deploy a large volume pump, with help from RV Atlantis Bosun Patrick Hennessy, Seaman Kevin Threadgold, and SSSG tech Catie Craver (from left to right). The large volume pump, built by McLane Research Laboratories and part of the WHOI equipment pool, was modified for use at the seafloor to collect microbes contained in the hydrothermal fluids onto a filter. The modification of the pump also includes a long hose with an intake nozzle that is placed directly into the vent. Used in conjunction with the Alvin submersible, the pump is guided to the depths the evening before the Alvin dive, deployed close to a vent site either by wire or as a free-falling instrument. The next day Alvin picks it up and brings it directly to the vent site; after pumping is finished, Alvin pulls a pin to release the pump’s anchor weights and it rises back to the surface where it is collected by those aboard the ship. Photo by Craig Taylor, Woods Hole Oceanographic Institution

“This is a great opportunity to advance our understanding of deep-sea hydrothermal vent microbial communities and their global impact,” said Sievert. The project includes collaborations among researchers from four US institutions, including chemist Jeff Seewald and biologist Craig Taylor from WHOI, as well as researchers from France, Germany, and China.

The team will conduct laboratory and field experiments to study microbial interaction and the biogeochemical cycling of carbon, nitrogen, and sulfur associated with chemosynthesis at hydrothermal vents. These experiments, in combination with a suite of cutting edge analytical techniques, will create unprecedented opportunities that will lead to unique insights into the functioning and environmental interactions of deep-sea vent microbial communities. 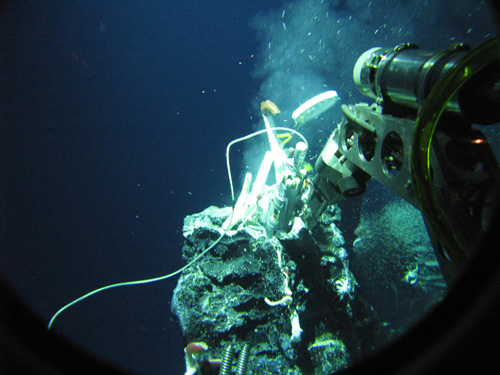 At Crab Spa, a hydrothermal vent on the East Pacific Rise, Alvin’s manipulator arm holds a sensor developed by French colleague Nadine Le Bris that measures temperature, pH, and sulfide in situ. WHOI microbial ecologist Stefan Sievert and colleagues are using the site to gain insights into chemosynthetic processes at deep-sea vents. With Ramunas Stepanauskas of Bigelow Laboratory for Ocean Sciences, the group recently obtained single microbial cells directly from the environment and are sequencing the DNA of the abundant, yet little-known microbes to get information on their physiology and metabolic potential. Photo by Stefan Sievert, Woods Hole Oceanographic Institution

To increase the public awareness of these unique environments, Sievert and his colleagues plan variety of educational and outreach activities aiming at a diverse audience ranging from grade 4-12, community colleges, and undergraduate universities to the general public. The group’s 2013 research cruise to the vent sites at 9ºN on the East Pacific Rise, including a vent known as “Crab Spa” will be featured on WHOI’s Dive and Discover website, which provides middle and high school students and the interested public with daily updates from sea, videos, slideshows, and interactive learning modules, enabling them to witness scientific exploration in near-real time.