*Engineers at Brown University have developed a system that cleanly and efficiently removes trace heavy metals from water. In experiments, the researchers showed the system reduced cadmium, copper, and nickel concentrations, returning contaminated water to near or below federally acceptable standards. The technique is scalable and has viable commercial applications, especially in the environmental remediation and metal recovery fields. Results appear in the Chemical Engineering Journal.*

PROVIDENCE, R.I. [Brown University] — An unfortunate consequence of many industrial and manufacturing practices, from textile factories to metalworking operations, is the release of heavy metals in waterways. Those metals can remain for decades, even centuries, in low but still dangerous concentrations.

Ridding water of trace metals “is really hard to do,” said Joseph Calo, professor emeritus of engineering who maintains an active laboratory at Brown. He noted the cost, inefficiency, and time needed for such efforts. “It’s like trying to put the genie back in the bottle.”

That may be changing. Calo and other engineers at Brown describe a novel method that collates trace heavy metals in water by increasing their concentration so that a proven metal-removal technique can take over. In a series of experiments, the engineers report the method, called the cyclic electrowinning/precipitation (CEP) system, removes up to 99 percent of copper, cadmium, and nickel, returning the contaminated water to federally accepted standards of cleanliness. The automated CEP system is scalable as well, Calo said, so it has viable commercial potential, especially in the environmental remediation and metal recovery fields. The system’s mechanics and results are described in a paper published in the Chemical Engineering Journal. 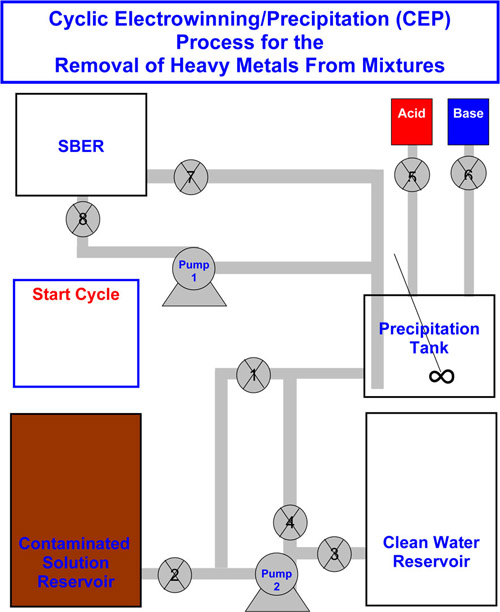 A proven technique for removing heavy metals from water is through the reduction of heavy metal ions from an electrolyte. While the technique has various names, such as electrowinning, electrolytic removal/recovery or electroextraction, it all works the same way, by using an electrical current to transform positively charged metal ions (cations) into a stable, solid state where they can be easily separated from the water and removed. The main drawback to this technique is that there must be a high-enough concentration of metal cations in the water for it to be effective; if the cation concentration is too low — roughly less than 100 parts per million — the current efficiency becomes too low and the current acts on more than the heavy metal ions.

Another way to remove metals is through simple chemistry. The technique involves using hydroxides and sulfides to precipitate the metal ions from the water, so they form solids. The solids, however, constitute a toxic sludge, and there is no good way to deal with it. Landfills generally won’t take it, and letting it sit in settling ponds is toxic and environmentally unsound. “Nobody wants it, because it’s a huge liability,” Calo said.

The dilemma, then, is how to remove the metals efficiently without creating an unhealthy byproduct. Calo and his co-authors, postdoctoral researcher Pengpeng Grimshaw and George Hradil, who earned his doctorate at Brown and is now an adjunct professor, combined the two techniques to form a closed-loop system. “We said, ‘Let’s use the attractive features of both methods by combining them in a cyclic process,’” Calo said.

It took a few years to build and develop the system. In the paper, the authors describe how it works. The CEP system involves two main units, one to concentrate the cations and another to turn them into stable, solid-state metals and remove them. In the first stage, the metal-laden water is fed into a tank in which an acid (sulfuric acid) or base (sodium hydroxide) is added to change the water’s pH, effectively separating the water molecules from the metal precipitate, which settles at the bottom. The “clear” water is siphoned off, and more contaminated water is brought in. The pH swing is applied again, first redissolving the precipitate and then reprecipitating all the metal, increasing the metal concentration each time. This process is repeated until the concentration of the metal cations in the solution has reached a point at which electrowinning can be efficiently employed.

When that point is reached, the solution is sent to a second device, called a spouted particulate electrode (SPE). This is where the electrowinning takes place, and the metal cations are chemically changed to stable metal solids so they can be easily removed. The engineers used an SPE developed by Hradil, a senior research engineer at Technic Inc., located in Cranston, R.I. The cleaner water is returned to the precipitation tank, where metal ions can be precipitated once again. Further cleaned, the supernatant water is sent to another reservoir, where additional processes may be employed to further lower the metal ion concentration levels. These processes can be repeated in an automated, cyclic fashion as many times as necessary to achieve the desired performance, such as to federal drinking water standards.

In experiments, the engineers tested the CEP system with cadmium, copper, and nickel, individually and with water containing all three metals. The results showed cadmium, copper, and nickel were lowered to 1.50, 0.23 and 0.37 parts per million (ppm), respectively — near or below maximum contaminant levels established by the Environmental Protection Agency. The sludge is continuously formed and redissolved within the system so that none is left as an environmental contaminant.

“This approach produces very large volume reductions from the original contaminated water by electrochemical reduction of the ions to zero-valent metal on the surfaces of the cathodic particles,” the authors write. “For an initial 10 ppm ion concentration of the metals considered, the volume reduction is on the order of 106.”

Calo said the approach can be used for other heavy metals, such as lead, mercury, and tin. The researchers are currently testing the system with samples contaminated with heavy metals and other substances, such as sediment, to confirm its operation.