Dust avalanches around impact craters on Mars appear to be the result of the shock wave preceding the actual impact, according to a study led by an undergraduate student at the UA.

When a meteorite careens toward the dusty surface of the Red Planet, it kicks up dust and can cause avalanching even before the rock from outer space hits the ground, a research team led by an undergraduate student at the University of Arizona has discovered.

“We expected that some of the streaks of dust that we see on slopes are caused by seismic shaking during impact,” said Kaylan Burleigh, who led the research project. “We were surprised to find that it rather looks like shockwaves in the air trigger the avalanches even before the impact.” 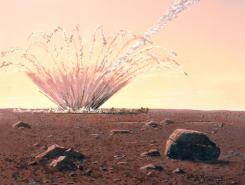 Because of Mars’ thin atmosphere, which is 100 times less dense than Earth’s, even small rocks that would burn up or break up before they could hit the ground here on Earth crash into the Martian surface relatively unimpeded.

Each year, about 20 fresh craters between 1 and 50 meters (3 to 165 feet) show up in images taken by the HiRISE camera on board NASA’s Mars Reconnaissance Orbiter. The High Resolution Imaging Science Experiment, or HiRISE, is operated by the UA’s Lunar and Planetary Laboratory and has been photographing the Martian surface since 2006, revealing features down to less than 1 meter in size.

For this study, the team zoomed in on a cluster of five large craters, which all formed in one impact event close to Mars’ equator, about 825 kilometers (512 miles) south of the boundary scarp of Olympus Mons, the tallest mountain in the solar system. Previous observations by the Mars Global Surveyor orbiter, which imaged Mars for nine years until 2006, showed that this cluster was blasted into the dusty surface between May 2004 and February 2006. 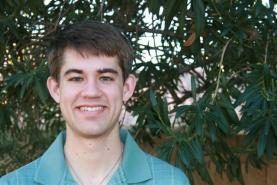 Kaylan Burleigh made the discovery while still a freshman at the UA. Image credit: University of Arizona

The results of the research, which Burleigh first took on as a freshman under former UA Regents Professor H. Jay Melosh, are published in the planetary science journal Icarus. Previous studies had looked at dark or light streaks on the Martian landscape interpreted as landslides, but none had tied such a large number of them to impacts.

The authors interpret the thousands of downhill-trending dark streaks on the flanks of ridges covering the area as dust avalanches caused by the impact. The largest crater in the cluster measures 22 meters, or 72 feet across and occupies roughly the area of a basketball court. Most likely, the cluster of craters formed as the meteorite broke up in the atmosphere, and the fragments hit the ground like a shotgun blast.

Narrow, relatively dark streaks varying from a few meters to about 50 meters in length scour the slopes around the impact site.

“The dark streaks represent the material exposed by the avalanches, as induced by the the airblast from the impact,” Burleigh said. “I counted more than 100,000 avalanches and, after repeated counts and deleting duplicates, arrived at 64,948.” 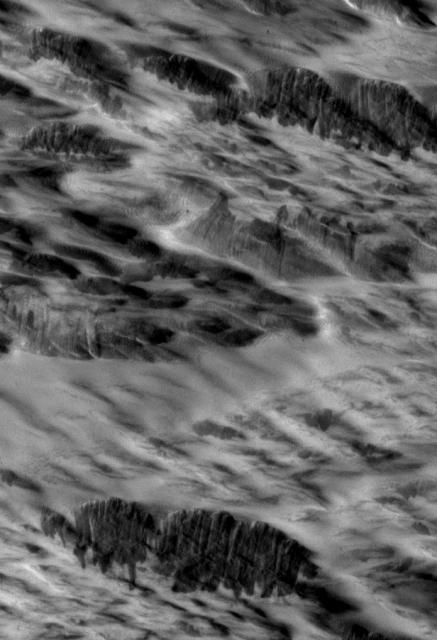 Close-up of Martian terrain with dark streaks interpreted as avalanches blasted by shockwaves from a meteorite impact. Image credit: NASA/JPL-Caltech/The University of Arizona

When Burleigh looked at the distribution of avalanches around the impact site, he realized their number decreased with distance in every direction, consistent with the idea that they were related to the impact event.

But it wasn’t until he noticed a pair of peculiar surface features resembling a curved dagger, described as scimitars, extending from the central impact crater, that the way in which the impact caused the avalanches became evident.

“Those scimitars tipped us off that something other than seismic shaking must be causing the dust avalanches,” Burleigh said.

As a meteor screams through the atmosphere at several times the speed of sound, it creates shockwaves in the air. Simulating the shockwaves generated by impacts on Martian soil with computer models, the team observed the exact pattern of scimitars they saw on their impact site. 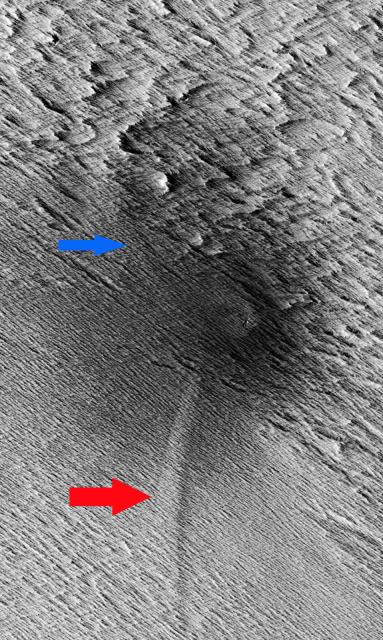 “We think the interference among different pressure waves lifts up the dust and sets avalanches in motion. These interference regions, and the avalanches, occur in a reproducible pattern,” Burleigh said. “We checked other impact sites and realized that when we see avalanches, we usually see two scimitars, not just one, and they both tend to be at a certain angle to each other. This pattern would be difficult to explain by seismic shaking.”

In the absence of plate tectonic processes and water-caused erosion, the authors conclude that small impacts might be more important in shaping the Martian surface than previously thought.

“This is one part of a larger story about current surface activity on Mars, which we are realizing is very different than previously believed,” said Alfred McEwen, principal investigator of the HiRISE project and one of the co-authors of the study. “We must understand how Mars works today before we can correctly interpret what may have happened when the climate was different, and before we can draw comparisons to Earth.”