COLLEGE PARK, Md. — A team of neuroscientists has discovered important new information in the search for an effective

treatment for Alzheimer’s disease, the debilitating neurological disorder that afflicts more than 5.3 million Americans and is the sixth-leading cause of death in the United States. Hey-Kyoung Lee , associate professor in the University of Maryland Department of Biology, and her research team have shown that they may be able to eliminate debilitating side effects caused by a promising Alzheimer’s drug by stimulating the brain’s nicotine receptors.

Scientists believe that an over-production of a peptide called A-beta in the brain is the cause of Alzheimer’s and are developing drug treatments that prevent the action of the enzyme BACE1, which produces A-beta. But Lee and her team, which includes researchers from the University of Maryland and Johns Hopkins University, previously demonstrated that eliminating – or “knocking out” – the BACE1 enzyme in laboratory mice caused some of the test animals to become confused and aggressive. “The mice exhibit signs of schizophrenia and memory loss when you block the enzyme,” says Lee. “BACE1 is a very promising drug target, but you have to overcome these obviously debilitating side effects to effectively treat Alzheimer’s disease.”

Lee and her team have been searching for a solution that could circumvent the abnormal brain function and behavioral side effects caused by BACE1 inhibition, and they think they may have found it. They pinpointed the receptor that is targeted by nicotine, the Alpha7 nicotinic acetylcholine receptor, as a potential therapeutic target. A paper describing their breakthrough appears in the current issue of the Journal of Neuroscience. 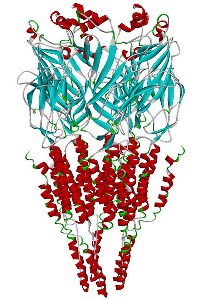 About the image: Molecular model of the alpha7 nicotinic receptor. Image credit: University of Maryland

“By stimulating the Alpha7 receptor with nicotine, we were able to recover normal brain function,” explains Lee. “We are very hopeful that this will be a way to overcome the deficits seen with the BACE-1 knockouts.”

The research group pinpointed the brain dysfunction to the regulation of calcium uptake by neurons. Calcium triggers the release of neurotransmitters, the chemicals which transmit signals from a neuron to a target cell across a synapse.

The research team found that nicotine activated the uptake of calcium, and thus the neurotransmitter release mechanism.

“After treatment with nicotine,” says Lee, “the mice released normal amounts of the neurotransmitter as seen in brains of normal animals.”

Lee is optimistic about the potential of this discovery, but also says that behavioral studies still need to be conducted to determine if BACE1 knockout mice treated with nicotine will behave normally. Her colleague at Johns Hopkins University, Philip C. Wong, professor of pathology and neuroscience and a co-author on this study, will be conducting these behavior studies as a follow up.

“If you tag along nicotine or anything that can activate this receptor along with the BACE1 inhibitor, then you probably can recover the function better,” Lee asserts. “It is an exciting development because nicotine is an already known drug that could be easily used therapeutically with Alzheimer’s treatment.”

Until recently, challenges in getting a drug that could pass through the blood-brain barrier prevented the development of an effective BACE1 inhibitor drug for use in humans, but recently scientists have developed one that can be taken orally. The University of Maryland and Johns Hopkins University are filing a patent application on the therapeutic treatment that Lee and her colleagues have developed targeting the Alpha7 nicotine receptor. It is possible that this therapy may be one day packaged with BACE1 inhibitor drugs to treat Alzheimer’s disease and block its progression.