Next Scientific Fashion Could be Designer Nanocrystals

Three University of Chicago chemistry professors hope that their separate research trajectories will converge to create a new way of assembling what they call “designer atoms” into materials with a broad array of potentially useful properties and functions.

These “designer atoms” would be nanocrystals—crystalline arrays of atoms intended to be manipulated in ways that go beyond standard uses of atoms in the periodic table. Such arrays would be suited to address challenges in solar energy, quantum computing and functional materials.

The partners in the project are Prof. David Mazziotti, and Associate Professors Greg Engel and Dmitri Talapin. All three have made key advances that are critical for moving the project forward. Now, with $1 million in funding from the W. M. Keck Foundation, they can build on their separate advances in a concerted way toward a new goal.

“If you look at the history of science, a major development starts with people of different backgrounds talking to each other and learning from each other and doing something really revolutionary rather than incremental,” Talapin said.

Developments in Talapin’s laboratory form the core of the project. A synthetic inorganic chemist, he specializes in creating precisely engineered nanocrystals with well-defined characteristics. 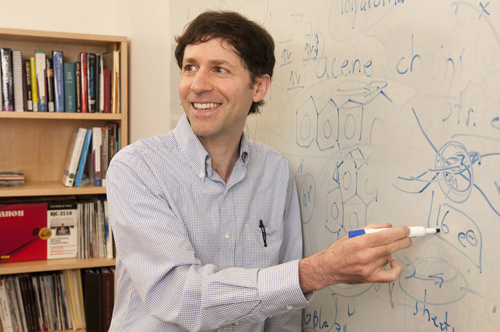 Prof. David Mazziotti (above) and colleagues Dmitri Talapin and Greg Engel are attempting to formulate the basic principles needed to improve the efficiency and information transfer of electrons in nanocrystals. “That kind of thing you can play into many applications,” said Mazziotii. Photo by Lloyd DeGrane

Nanocrystals consist of hundreds or thousands of atoms. This is small enough that new quantum phenomena begin to emerge, but large enough to provide convenient “modules” for the design of new materials. “It’s an interesting combination in that you build materials not from individual atoms, but from the units that resemble atoms in many ways but also behave as a metal, semiconductor or magnet. It’s a bit crazy,” Talapin said.

“You build chemistry from atoms, and quantum mechanics provides principles for doing that,” said Mazziotti, referring to the laws of physics that dominate the world at ultra-small scales. “In the same way, we envision tremendous opportunities in terms of taking nanocrystalline arrays and nanocrystals as the building blocks for new structures where we assemble them into strongly correlated systems.”

The essence of strong correlation, of chemical bonds, of chemistry generally, is the connections between particles and how properties of these particles change as they bind to one another, Engel noted. “It’s about new emerging properties coming from strong mixing between the electronic states of particles, the same way two atoms come together to make a molecule,” he said.

Hydrogen and oxygen gases have very different properties. Yet when two hydrogen atoms share electrons with an oxygen atom, they form water. The UChicago trio’s ambition is to extend this framework from the level of individual atoms to the level of small, functional objects, such as metal or magnetic semiconductors.

The key to their project is controlling the degree of correlation between electrons on different nanocrystals. In 2009, Talapin and his collaborators developed a way to control the motions of electrons as they move from one nanocrystal to the next. Their “electronic glue” enables semiconductor nanocrystals to efficiently transfer their electric charges to one another, an important step in the synthesis of new materials.

“That glue is provided by a special tuning of the behavior of the electrons,” Mazziotti said. “You want the electrons to have their motions correlated in a special way to allow the efficient transfer of that energy from one nanocrystal to the other.” 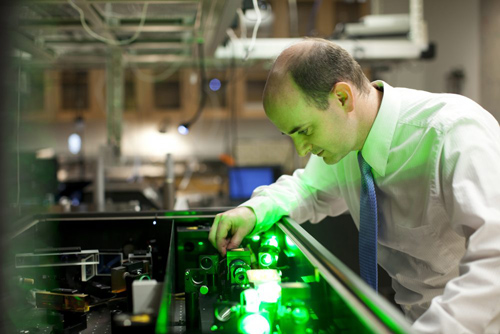 Greg Engel, associate professor in chemistry, is pictured here tuning a femtosecond laser system used to dissect couplings between nanocrystals. Understanding emergent properties arising from strong coupling between different nanomaterials could lead to theoretical and technological advances. “The goal is to come up with ideas and try to push them as far as you possibly can,” Engel said. Photo by Chris Strong

Achieving greater control of correlated electrons—those whose motions are linked to each other—on different nanocrystals is the key to success in the Keck project.

“If we can enhance that, then we can essentially develop a whole palette of new materials that essentially derives from using the nanocrystals as building blocks and strong correlation as a way of tuning, essentially, the degree to which or how they talk to each other,” Mazziotti said. “We want really efficient transfer of energy and information between the different units. Previously in the area of nanocrystalline arrays, the nanocrystals only communicated with each other very weakly.”

Mazziotti and Engel bring theoretical and spectroscopic advances, respectively, to the collaboration. Mazziotti’s advance provides an alternative to traditional approaches to computing strongly correlated electrons in molecules, which scale exponentially with the number of electrons. He has solved a longstanding problem that enables calculations using just two of a molecule’s electrons, which dramatically decreases the computational cost.

His studies of firefly bioluminescence and other phenomena have shown that as molecular systems grow larger, strong correlations between electrons grow more powerful and open new possibilities for emergent behavior. In the context of a semiconducting material such as silicon, emergent behavior is how individual nanoparticles effectively lose their identity, giving rise to collective properties in new materials. 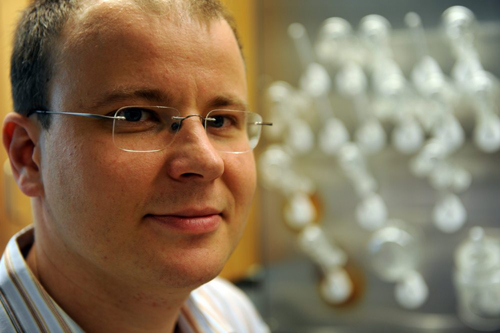 Nanocrystals, like atoms, display discrete energy levels that define their respective properties. “In nanocrystals you see the emergence of discrete states that are totally non-existent in bulk materials,” said Dmitri Talapin, associate professor in chemistry. “You’re essentially seeing the emergence of quantum behavior as you shrink the size.” Photo by Dan Dry

The advance in Engel’s research group was the development of a technique called GRadient-Assisted Photon Echo (GRAPE) spectroscopy, which borrows ideas from magnetic resonance imaging but is used for spectroscopy rather than medical imaging. Engel already has used GRAPE to observe the correlated motion and coupling between chromophores, which are light-absorbing molecules. Now he will apply the technique to nanocrystals.

“This, for the first time, will let us really see the direct nature of the electronic coupling that’s at the heart of this idea of new bonding concepts in designer atoms,” Engel said. “We’ll be able to provide the experimental evidence that will combine the theory that David is developing with the new structures that Dmitri is building.”

Based in Los Angeles, the W. M. Keck Foundation was established in 1954 by the late W. M. Keck, founder of the Superior Oil Company. The foundation’s grant making is focused primarily on pioneering efforts in medical research, science and engineering. The foundation also maintains a program to support undergraduate science and humanities education and a Southern California Grant Program that provides support in health care, civic and community services, education and the arts, with a special emphasis on children.