Grand Canyon as Old as the Dinosaurs, Suggests New Study Led by CU-Boulder

An analysis of mineral grains from the bottom of the western Grand Canyon indicates it was largely carved out by about 70 million years ago — a time when dinosaurs were around and may have even peeked over the rim, says a study led by the University of Colorado Boulder.

The new research pushes back the conventionally accepted date for the formation of the Grand Canyon in Arizona by more than 60 million years, said CU-Boulder Assistant Professor Rebecca Flowers. The team used a dating method that exploits the radioactive decay of uranium and thorium atoms to helium atoms in a phosphate mineral known as apatite, said Flowers, a faculty member in CU-Boulder’s geological sciences department.

The helium atoms were locked in the mineral grains as they cooled and moved closer to the surface during the carving of the Grand Canyon, she said. Temperature variations at shallow levels beneath the Earth’s surface are influenced by topography, and the thermal history recorded by the apatite grains allowed the team to infer how much time had passed since there was significant natural excavation of the Grand Canyon, Flowers said.

“Our research implies that the Grand Canyon was directly carved to within a few hundred meters of its modern depth by about 70 million years ago,” said Flowers. A paper on the subject by Flowers and Professor Kenneth Farley of the California Institute of Technology was published online Nov. 29 in Science magazine. 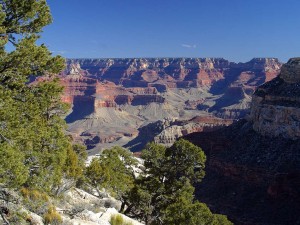 A new study led by CU-Boulder indicates the Grand Canyon was largely carved by about 70 million years ago. Photo courtesy of PDPhoto.org

Flowers said there is significant controversy among scientists over the age and evolution of the Grand Canyon. A variety of data suggest that the Grand Canyon had a complicated history, and the entire modern canyon may not have been carved all at the same time. Different canyon segments may have evolved separately before coalescing into what visitors see today.

In a 2008 study, Flowers and colleagues showed that parts of the eastern section of the Grand Canyon likely developed some 55 million years ago, although the bottom of that ancient canyon was above the height of the current canyon rim at that time before it subsequently eroded to its current depth.

Over a mile deep in places, Arizona’s steeply sided Grand Canyon is about 280 miles long and up to 18 miles wide in places. Visited by more than 5 million people annually, the iconic canyon was likely carved in large part by an ancestral waterway of the Colorado River that was flowing in the opposite direction millions of years ago, said Flowers.

“An ancient Grand Canyon has important implications for understanding the evolution of landscapes, topography, hydrology and tectonics in the western U.S. and in mountain belts more generally,” said Flowers. The study was funded in part by the National Science Foundation.

“The main thing this technique allows us to do is detect variations in the thermal structure at shallow levels of the Earth’s crust,” she said. “Since these variations are in part induced by the topography of the region, we obtained dates that allowed us to constrain the timeframe when the Grand Canyon was incised.”

Flowers and Farley took their uranium/thorium/helium dating technique to a more sophisticated level by analyzing the spatial distribution of helium atoms near the margin of individual apatite crystals. “Knowing not just how much helium is present in the grains but also how it is distributed gives us additional information about whether the rocks had a rapid cooling or slow cooling history,” said Flowers.

Paleontologists believe dinosaurs were wiped out when a giant asteroid collided with Earth 65 million years ago, resulting in huge clouds of dust that blocked the sun’s rays from reaching Earth’s surface, cooling the planet and killing most plants and animals.

Because of the wide numbers of theories, dates and debates regarding the age of the Grand Canyon, geologists have redoubled their efforts, said Flowers. “There has been a resurgence of work on this problem over the past few years because we now have some new techniques that allow us to date rocks that we couldn’t date before,” she said.

While the dating research for the new study was done at Caltech, Flowers recently set up her own lab at CU-Boulder with the ability to conduct uranium/thorium/helium dating.

“If it were simple, I think we would have solved the problem a long time ago,” said Flowers. “But the variety of conflicting information has caused scientists to argue about the age of the Grand Canyon for more than 150 years. I expect that our interpretation that the Grand Canyon formed some 70 million years ago is going to generate a fair amount of controversy, and I hope it will motivate more research to help solve this problem.”