University of Chicago researchers have developed a method to diagnose pancreatic cancer earlier in patients. By collecting samples from the portal vein—which carries blood from the gastrointestinal tract, including from the pancreas, to the liver—physicians can learn far more about a patient’s pancreatic cancer than by relying on peripheral blood from a more easily accessed vein in the arm.

Primary tumors shed cancerous cells, known as circulating tumor cells, or CTCs, into the blood. These have been widely studied as prognostic biomarkers for various cancers. Because these cells are often larger, irregularly shaped and tend to cluster together, they get trapped in smaller vessels.

The authors hypothesized that most cells released from a gastrointestinal tumor would flow into the portal vein and then get sequestered by the narrow vessels in the liver. These cells would not reach the peripheral venous system. CTCs from gastrointestinal tumors are rarely identified in the peripheral blood until the cancer is widely metastatic.

To test this theory, UChicago researchers used an ultrasound-guided endoscope and a small needle to take blood from the portal vein during routine diagnostic endoscopies. They found CTCs in 100 percent of 18 patients with suspected tumors in the pancreas and bile ducts. Tests using peripheral blood samples, the standard method, detected tumors cells in only four of the 18 patients. 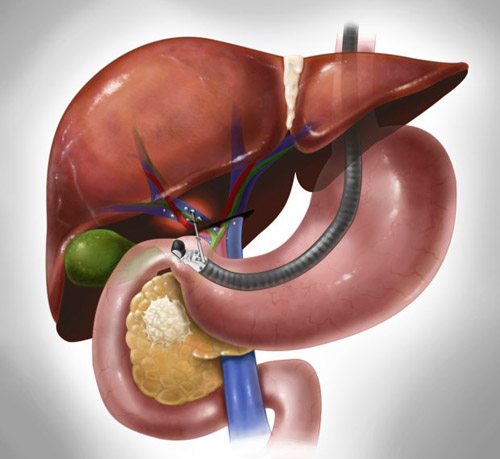 UChicago researchers developed a method to give earlier diagnoses of pancreatic cancer by collecting samples of circulating tumor cells from the portal vein, which carries blood from the gastrointestinal tract to the liver. Image courtesy of The University of Chicago Medicine & Biological Sciences

“We demonstrated that this method is potentially quite valuable as well as noninvasive, feasible and safe,” said study director Irving Waxman, professor of medicine and surgery and director of the Center for Endoscopic Research and Therapeutics at the University. “We had no complications related to portal vein blood acquisition.”

Only seven percent of patients diagnosed with stage II disease are still alive five years after diagnosis, making it one of the most lethal forms of cancer. The American Cancer Society estimates that in 2015, nearly 49,000 people will be diagnosed with pancreatic cancer and 40,560 people with this disease will die.

The portal vein samples contained far more tumor cells in all stages evaluated, including locally advanced as well as metastatic tumors, the researchers report online in the journal Gastroenterology. Blood collected from the portal vein had a mean of more than 100 CTCs per 7.5 milliliters. Patients with less advanced disease, who could potentially benefit from surgery to remove the tumor, had fewer CTCs. Those patients averaged about 80 CTCs per 7.5 milliliters.

In contrast, when the researchers used peripheral blood to test the same patients, they found few, if any, circulating tumor cells. Those samples contained, on average, less than one CTC in 7.5 milliliters of blood, the equivalent of one cell in a billion.

“Access to circulating tumor cells may help us define the diagnosis and guide treatment,” Waxman said. “Having the ability to count them and to probe their molecular profiles can make a substantial difference in how we treat each patient’s tumor.”

“In the setting of localized cancer where these findings are most applicable, the additional information of portal vein CTC number and their molecular characterization may help predict who will benefit from aggressive therapy before surgery, who is most at risk for a recurrence after the operation and even who will not benefit from surgery at all,” said study co-author Daniel Catenacci, assistant professor of medicine.

These hidden cells in the portal venous system could help cancer specialists make better clinical decisions. Molecular characterization of CTCs at the time of diagnosis or after neoadjuvant therapy can provide clues about each patient’s prognosis. The frequent loss of protective tumor-suppressor genes—such as TP53, SMAD4 and p16/CDK2NA, which are often inactivated in pancreatic cancer—correlates with a worse outcome.

“This is a novel and far more sensitive way to acquire, enumerate and characterize CTCs from pancreatobiliary and other gastrointestinal cancers in this setting,” Waxman said. “We believe it can improve how we stratify patients.”

Patients who don’t have CTCs in the portal vein, for example, should have a better prognosis than those who do. Treatments can be personalized accordingly.

The authors agree that more studies need to be done to confirm their hypothesis with larger numbers of patients in a controlled setting. They plan further collaborative efforts.

“Ultimately, we envision that this new test could help plan treatment, based on a much more accurate record of the number and characteristics of circulating tumor cells,” said co-author Christopher Chapman, a member of the Center for Endoscopic Research and Therapeutics at the University. “That should allow us to make better, more informed judgements about prognosis, and avoid interventions, such as surgery, that might not help.”