Based in Nice, France, IBM’s fourth Bluemix Garage will help transform how apps are built with IBM Cloud

ARMONK, N.Y. and NICE, FR – 22 Mar 2016:  IBM today announced the opening of a Bluemix Garage in Nice, France to help European organizations of all sizes and industries accelerate the development and design of next-generation apps on IBM Cloud.

Now spanning four locations across the globe, Bluemix Garages are physical hubs where multi-disciplinary teams, including developers, product managers and designers, can collaborate with IBM experts to rapidly innovate and deliver new technologies using IBM Cloud. Based in San Francisco, Toronto, London, and now Nice, these Garages give developers access to the tools and expertise they need to build progressive, intelligent apps.

The Nice Garage will serve as a counterpart to IBM’s Bluemix Garage in London, the company’s northern anchor to the continent’s innovation scene. Both Garages will help support the world’s rapidly growing developer population, expected to reach more than 20 million by 2020. Europe alone already has a base of 1.6 million developers, priming the region to play a critical part in the next wave of global cloud and cognitive innovation. 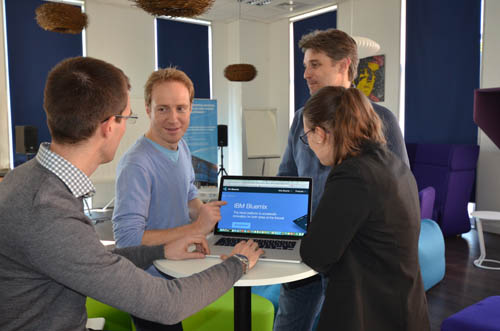 Launched in 2014, the London Bluemix Garage has grown into an innovation hub, working with developers to design and build in new ways with IBM Cloud, which is currently drawing more than 20,000 developers per week. For example, the Garage team is working with Simon Wheatcroft, a blind ultra-marathon runner, to use IBM Cloud APIs and services, such as Cloudant, IBM’s database-as-a-service, to use data to direct, monitor and pace him through a solo, 60-mile run through a desert in Namibia.

Bluemix, IBM’s Cloud platform, which draws more than 20,000 new developers per week who are creating more than 120,000 apps every month, has grown rapidly to become the largest public Cloud Foundry deployment in the world. Based in open standards, it features over 140 tools and services spanning categories of big data, mobile, Watson, analytics, integration, DevOps, security and the Internet of Things.

Powered by IBM Cloud’s continuously growing catalog of advanced APIs, Garage teams work with companies to identify and build new ways to use the latest technologies, such as a robust roster of Watson APIs, Twitter social sentiment analysis, IoT tools, and new forms of data such as video, weather intelligence and more.

Local Nice startup ADVANSOLAR, a sustainable mobility company, tapped IBM Cloud and Design practices in the Garage to create and deploy its new electric bicycle rental services in just weeks – cutting the time needed to get to market by more than 50 percent. Using the Garage’s design methods as a starting point, ADVANSOLAR worked with Garage experts to use IBM Cloud tools, including IoT, NodeRed and Node.JS services, to easily integrate external services and data to build a high-quality customer experience.

“Working with IBM Cloud and design experts enabled us to quickly identify the most important features of our new service, and then build and deliver them rapidly,” said Raphael Briere, CEO of ADVANSOLAR. “Combining the power, openness and agility of IBM Cloud with the Garage’s expertise enabled us to create a valuable product rapidly, and deliver our rental services at the right price for all our customers.”

The Garage’s co-location with the BIC also houses it within the European Business Network – Europe’s largest startup incubator network comprised of over 10,000 startups.

“We are thrilled to welcome IBM’s latest Bluemix Garage – and its top experts in cloud, design and cognitive technologies – into our incubator of Europe’s most promising startups,” said Marie-Christine Vidal, director of BIC of Nice. “We believe the ability to easily build with cloud will be critical to helping European companies innovate on a global scale.”

“Our latest Bluemix Garage in Nice is a critical addition to our network of Garages across Europe and globally, and will help our clients to more quickly build with IBM Cloud,” said Steve Robinson, General Manager, Client Technical Engagement of IBM Cloud. “IBM Cloud offers companies the most rapid on-ramp, and most robust toolset, for their developers to create the apps they need to succeed and compete.”