MINNEAPOLIS / ST. PAUL — A new University of Minnesota study reveals that the release of treated municipal wastewater – even wastewater treated by the highest-quality treatment technology – can have a significant effect on the quantities of antibiotic-resistant bacteria, often referred to as “superbacteria,” in surface waters.

The study also suggests that wastewater treated using standard technologies probably contains far greater quantities of antibiotic-resistant genes, but this likely goes unnoticed because background levels of bacteria are normally much higher than in the water studied in this research. 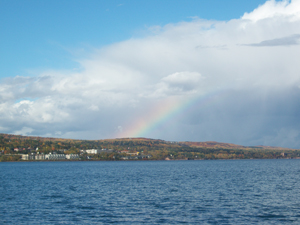 The new study is led by civil engineering associate professor Timothy LaPara in the University of Minnesota, Twin Cities College of Science and Engineering. The study is published in the most recent issue of “Environmental Science and Technology,” a journal of the American Chemical Society. The research was part of a unique class project in a graduate-level civil engineering class at the University of Minnesota focused on environmental microbiology.

Antibiotics are used to treat numerous bacterial infections, but the ever-increasing presence of antibiotic-resistant bacteria has raised substantial concern about the future effectiveness of antibiotics. In response, there has been increasing focus on environmental reservoirs of antibiotic resistance over the past several years. Antibiotic use in agriculture has been heavily scrutinized, while the role of treated municipal wastewater has received little attention as a reservoir of resistance.

Antibiotic-resistant bacteria develop in the gastrointestinal tracts of people taking antibiotics. These bacteria are then shed during defecation, which is collected by the existing sewer infrastructure and passed through a municipal wastewater treatment facility.

In this study, the Ph.D. students and professor examined the impact of municipal wastewater in Duluth, Minn., on pristine surface waters by gathering water samples from the St. Louis River, Duluth-Superior Harbor, and Lake Superior in northeastern Minnesota. The treatment facility in Duluth is considered one of the best. After solids and biological matter are removed, the Duluth wastewater treatment is one of only a few in the country that filter water a third time through a mixed media filter to remove additional particles of bacteria and nutrients. Standard wastewater treatment treats water twice to remove solids and biological matter.

“This was a unique and ideal location for this study because of the exemplary wastewater treatment mixed with surprisingly pristine surface waters with very low background levels of bacteria that wouldn’t mask our results,” LaPara said. “Previous studies in which treated municipal wastewater was implicated as a source of antibiotic resistance were more convoluted because multiple sources of antibiotic resistance genes existed, such as agricultural activity and industrial wastewater discharges.”

While the levels of overall bacteria were still relatively low in the surface water samples, researchers in the University of Minnesota study found that the quantities of antibiotic-resistant genes and human-specific bacteria were typically 20-fold higher at the site where treated wastewater was released into the Duluth-Superior Harbor compared to nearby surface water samples.

The University of Minnesota research study was funded by the National Science Foundation’s broader impacts effort, which combines research and education. The Minnesota Environment and Natural Resources Trust Fund paid for time on the R/V Blue Heron ship to collect water samples.