*Spinal Muscular Atrophy affects one in 6,000 children; no known cure*

COLUMBIA, Mo. – A team of University of Missouri researchers have found that targeting a synthetic molecule to a specific gene could help the severity of the disease Spinal Muscular Atrophy (SMA) – the leading genetic cause of infantile death in the world.

“When we introduced synthetic RNA into mice that carry the genes responsible for SMA, the disease’s severity was significantly lowered,” said Chris Lorson, researcher at the Bond Life Sciences Center and professor in the Department of Veterinary Pathobiology and the Department of Molecular Microbiology and Immunology. “The mice that receive synthetic RNA gain more weight, live longer, and had improvements in motor skills. These results are very exciting.” 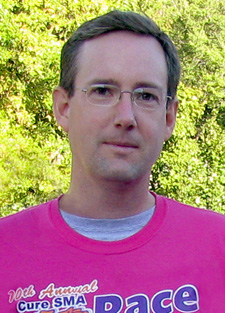 SMA is a rare genetic disease that is inherited by one in 6,000 children, who often die young because there is no cure. Children who inherit SMA are missing a gene that produces a protein which directs nerves in the spine to give commands to muscles. Lorson’s lab focuses on targeting a partially functioning back-up copy of the missing gene, known as SMN-2, into producing the needed protein.

While the results are promising, Lorson notes additional research is needed before synthetic RNA could be used on humans for SMA. Clinical trials for similar synthetic RNAs are currently being performed in other neurodegenerative disease such as Lou Gehrig’s or ALS. In SMA, there are clinical trials taking place in many labs across the country that are investigating drug compounds to increase SMN-2 protein production.

“It’s been remarkable to watch how quickly SMN-2 knowledge has transformed from basic molecular biology to being modified targets for novel therapeutics,” Lorson said. “SMN-2 is like a light that’s been dimmed, and we’re trying anything to get it brighter. Even turning it up a little bit would help dramatically.”

The study, “Bifunctional RNAs Targeting the Intronic Splicing Silencer N1 Increase SMN Levels and Reduce Disease Severity in an Animal Model of Spinal Muscular Atrophy,” was published in the journal Molecular Therapy. Co-authors include Erkan Osman and Pei-Fen Yen of the University of Missouri.