The first purely silicon oxide-based ‘Resistive RAM’ memory chip that can operate in ambient conditions– opening up the possibility of new super-fast memory – has been developed by researchers at UCL.

Resistive RAM (or ‘ReRAM’) memory chips are based on materials, most often oxides of metals, whose electrical resistance changes when a voltage is applied – and they “remember” this change even when the power is turned off.

ReRAM chips promise significantly greater memory storage than current technology, such as the Flash memory used on USB sticks, and require much less energy and space.

The UCL team have developed a novel structure composed of silicon oxide, described in a recent paper in the Journal of Applied Physics, which performs the switch in resistance much more efficiently than has been previously achieved. In their material, the arrangement of the silicon atoms changes to form filaments of silicon within the solid silicon oxide, which are less resistive. The presence or absence of these filaments represents a ‘switch’ from one state to another.

Unlike other silicon oxide chips currently in development, the UCL chip does not require a vacuum to work, and is therefore potentially cheaper and more durable. The design also raises the possibility of transparent memory chips for use in touch screens and mobile devices. 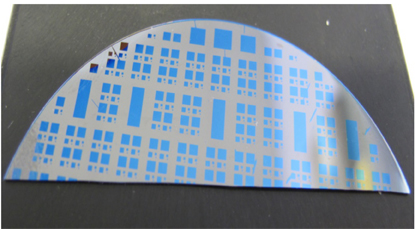 The team have been backed by UCLB, UCL’s technology transfer company, and have recently filed a patent on their device. Discussions are ongoing with a number of leading semiconductor companies.

Dr Tony Kenyon, UCL Electronic and Electrical Engineering, said: “Our ReRAM memory chips need just a thousandth of the energy and are around a hundred times faster than standard Flash memory chips. The fact that the device can operate in ambient conditions and has a continuously variable resistance opens up a huge range of potential applications.

“We are also working on making a quartz device with a view to developing transparent electronics.”

For added flexibility, the UCL devices can also be designed to have a continuously variable resistance that depends on the last voltage that was applied. This is an important property that allows the device to mimic how neurons in the brain function. Devices that operate in this way are sometimes known as ‘memristors’.

This technology is currently of enormous interest, with the first practical memristor, based on titanium dioxide, demonstrated in just 2008. The development of a silicon oxide memristor is a huge step forward because of the potential for its incorporation into silicon chips.

The team’s new ReRAM technology was discovered by accident whilst engineers at UCL were working on using the silicon oxide material to produce silicon-based LEDs. During the course of the project, researchers noticed that their devices appeared to be unstable.

UCL PhD student, Adnan Mehonic, was asked to look specifically at the material’s electrical properties. He discovered that the material wasn’t unstable at all, but flipped between various conducting and non-conducting states very predictably.

Adnan Mehonic, also from the UCL Department of Electronic and Electrical Engineering, said: “My work revealed that a material we had been looking at for some time could in fact be made into a memristor.

“The potential for this material is huge. During proof of concept development we have shown we can programme the chips using the cycle between two or more states of conductivity. We’re very excited that our devices may be an important step towards new silicon memory chips”

The technology has promising applications beyond memory storage. The team are also exploring using the resistance properties of their material not just for use in memory but also as a computer processor.

The work was funded by the Engineering and Physical Sciences Research Council.