A new robotic sensor deployed by Woods Hole Oceanographic Institution (WHOI) in Gulf of Maine coastal waters may transform the way red tides or harmful algal blooms (HABs) are monitored and managed in New England. The instrument was launched at the end of last month, and a second such system will be deployed later this spring.

The results will add critical data to weekly real-time forecasts of New England red tide this year distributed to more than 150 coastal resource and fisheries managers in six states as well as federal agencies such as NOAA, the FDA and the EPA. Researchers also plan to add data from the sensor to regular updates  provided on the “Current Status” page of the Northeast PSP website.

“This deployment is a critical step towards our long-term dream of having a network of instruments moored along the coast of the Gulf of Maine, routinely providing data on the distribution and abundance of HAB cells and toxins. The technology will greatly enhance management capabilities and protection of public health in the region,” says Don Anderson, WHOI senior scientist and the project’s principal investigator.

The Environmental Sample Processor (ESP) automatically collects a sample of water and then rapidly tests it for DNA and toxins that are indicative of targeted species and substances they may produce. For an animation of this process, see https://www.mbari.org/esp/ (Illustration by E. Paul Oberlander, Woods Hole Oceanographic Institution)

The two sensors, known as Environmental Sample Processors (ESPs), are molecular biology labs packed inside canisters the size of kitchen garbage cans. In the Gulf of Maine, the ESPs are mounted to ocean buoys and will detect and estimate concentrations of two algal species that cause HABs or “red tides” and one of the potentially fatal toxins they produce.

The first, Alexandrium fundyense, a single-celled algae, produces toxins that cause paralytic shellfish poisoning (PSP). The second organism, Pseudo-nitzschia, is a diatom responsible for amnesic shellfish poisoning, or ASP The data from the instruments will be transmitted to the shore in real time.

One instrument was tested off the coast of Portsmouth, NH, in 2011 and 2012. This year will see the first sustained deployments of the technology spanning the Alexandrium bloom season in the western Gulf of Maine and the first time the algal neurotoxin responsible for PSP will be autonomously measured by an ESP in natural waters.

The project scientists want the ESPs to become an integral part of the regional ocean observatory network managed by the Northeastern Regional Association of Coastal and Ocean Observing Systems (NERACOOS), which currently consists of 12 instrumented buoys that measure currents, salinity, temperature and meteorological variables at multiple locations in the Gulf of Maine and Long Island Sound. 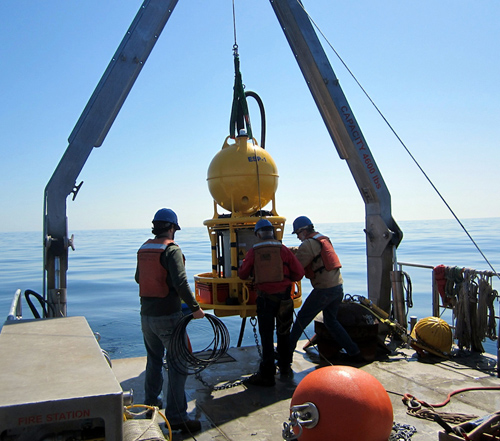 The ESP, shown here being deployed from the WHOI ship R/V Tioga, uses a robotic mechanism to carry out analyses, thereby eliminating the strict requirement for sending people to the sea to collect samples and process them manually. (Photo by Isaac Rosenthal, Woods Hole Oceanographic Institution & Northeastern University

“The ESPs are not a replacement for state-run programs that monitor naturally occurring marine toxins in shellfish. Instead, they will provide valuable data on the phytoplankton cells and associated toxins in coastal waters giving managers a more complete picture of the magnitude and distribution of HAB events,” says Kohl Kanwit, director of the Bureau of Public Health for the Maine Department of Marine Resources.

Since bloom toxicity can fluctuate substantially and in turn influence toxin levels in shellfish, this capability represents a significant step towards assessing the potential of a bloom to cause shellfish toxicity. The toxin detection capability is being implemented through the joint efforts of Greg Doucette of NOAA’s National Centers for Coastal Ocean Science (NCCOS), who developed the PSP toxin sensor, and Juliette Smith, a postdoctoral investigator in Anderson’s laboratory.  Funding has been provided by NOAA’s National Ocean Service and from the MIT Sea Grant program.

“Developing this technology and transitioning it to field testing with academic and industry partners in the Gulf of Maine is the next step in delivering and validating routine forecasts,” says Doucette.  “This pilot will demonstrate the ability of ESPs to deliver accurate and critical data to regional resource managers.  This is an excellent example of federal, academic, and industry collaboration working together to protect the public’s health.” 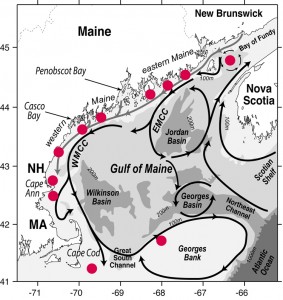 The ESP was developed by Chris Scholin, former PhD student with Anderson, and now president and chief executive officer of the Monterey Bay Aquarium Research Institute (MBARI).  Earlier models of the ESP were built, tested and used by MBARI researchers, predominantly on the West Coast. The instruments to be deployed in the Gulf of Maine are the first commercially available ESPs, manufactured at McLane Research Laboratories in Falmouth, Mass., under a license from Spyglass Biosecurity.

The ESP deployed last month is called “ESPchris”–named for Scholin–and will conduct sampling for approximately 45 days.  “ESPdon”–named for Anderson–will be deployed in late May and continue sampling for another 45 days or until the end of the bloom.

“This type of data will be extremely valuable for ongoing forecasting activities, which have been carried out routinely since 2008.  These data are particularly important for testing the forecast model. In the longer term in which we expect more ESPs to be available, we envision assimilating these data into the model, in much the same way the weather service uses meteorological observations,” says Dennis McGillicuddy, WHOI senior scientist and co-principal investigator of the project. 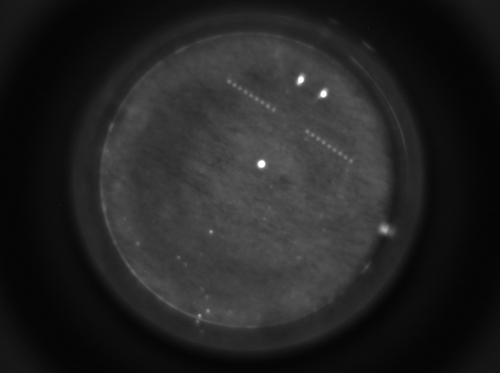 When deployed the ESP transmits images like this one, sent during testing in 2012. The row of dots indicates that the probe has detected Alexandrium in the water sample. (The three bright dots are used to align the image for quality control.) The information obtained from these tests, along with other local environmental conditions, is transmitted to shore using wireless communications making the data immediately available. (Image courtesy of Don Anderson Lab, Woods Hole Oceanographic Institution)

NOAA Ocean Service, National Centers for Coastal Ocean Science’s Center for Sponsored Coastal Ocean Research (CSCOR) is funding the regional ESP pilot through its external Monitoring and Event Response for Harmful Algal Bloom (MERHAB) program. The Harmful Algal Bloom and Hypoxia Research and Control Act (HABHRCA) authorizes funding for MERHAB and other HAB programs. Funding for the ESPs comes from the National Science Foundation, the Environmental Protection Agency, and NOAA’s Integrated Ocean Observing System Program. Development of the ESP was also funded in part by grants from the David and Lucile Packard Foundation, NSF, NASA, and the Gordon and Betty Moore Foundation. Additional funding is provided by the Massachusetts Institute of Technology Sea Grant Program and from Tom and Robin Wheeler. Data from the ESP will also inform a project on HABs supported by the Woods Hole Center for Oceans and Human Health through funding from the National Science Foundation and the National Institute for Environmental Health Sciences.