Advanced biofuels – liquid fuels synthesized from the sugars in cellulosic biomass – offer a clean, green and renewable alternative to gasoline, diesel and jet fuels. Bringing the costs of producing these advanced biofuels down to competitive levels with petrofuels, however, is a major challenge. Researchers at the U.S. Department of Energy (DOE)’s Joint BioEnergy Institute (JBEI), a bioenergy research center led by Berkeley Lab, have taken another step towards meeting this challenge with the development of a new technique for pre-treating cellulosic biomass with ionic liquids – salts that are liquids rather than crystals at room temperature. This new technique requires none of the expensive enzymes used in previous ionic liquid pretreatments, and makes it easier to recover fuel sugars and recycle the ionic liquid.

“Most of our ionic liquid efforts at JBEI have focused on using enzymes to liberate fermentable sugars from lignocellulosic biomass after pretreatment, but with this new enzyme-free approach we use an acid as the catalyst for hydrolyzing biomass polysaccharides into a solution containing fermentable sugars,” says Blake Simmons, a chemical engineer who heads JBEI’s Deconstruction Division and was the leader of this research. “We’re then able to separate the pretreatment solution into two phases, a sugar-rich water phase for recovery and a lignin-rich ionic liquid phase for recycling. As an added bonus, our new pretreatment technique uses a lot less water than previous pretreatments.” 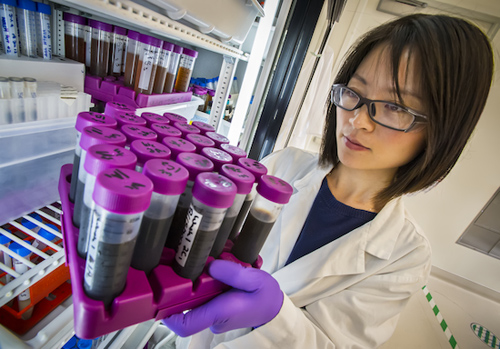 Ning Sun of the Joint BioEnergy Institute was lead author on a paper describing an enzyme-free ionic liquid pretreatment of biomass that can help boost the production of advanced biofuels. (Photo by Roy Kaltschmidt)

Simmons is the corresponding author of a paper describing this research that has been published in the journal Biotechnology for Biofuels. The paper is titled “Production and extraction of sugars from switchgrass hydrolyzed in ionic liquids.” Co-authoring it were Ning Sun, Hanbin Liu Noppadon Sathitsuksanoh, Vitalie Stavila, Manali Sawant, Anaise Bonito, Kim Tran, Anthe George, Kenneth Sale, Seema Singh and Bradley Holmes.

With the burning of fossil fuels continuing to add 9 billion metric tons of excess carbon dioxide to the atmosphere each year, the need for carbon neutral, cost-competitive renewable alternative fuels has never been greater. Advanced biofuels, produced from the microbial fermentation of sugars in lignocellulosic biomass, could displace gasoline, diesel and jet fuel on a gallon-for-gallon basis and be directly dropped into today’s engines and infrastructures without impacting performance. If done correctly, the use of advanced biofuels would not add excess carbon to the atmosphere.

Environmentally benign ionic liquids are used as green chemistry substitutes for volatile organic solvents. While showing great potential as a biomass pretreatment for dissolving lignocellulose and helping to hydrolyze the resulting aqueous solution into fuel sugars, the best of these ionic liquids so far have required the use of expensive enzymes. Recent studies have shown that acid catalysts, such as hydrochloric or Brønsted, can effectively replace enzyme-based hydrolysis, but the subsequent separation of sugars and ionic liquids becomes a difficult and expensive problem can require the use of significant amounts of water.

Guided by molecular dynamics simulations carried out at DOE’s National Energy Research Scientific Computing Center (NERSC), Simmons and his colleagues at JBEI solved this problem by deploying the ionic liquid imidazolium chloride in tandem with an acid catalyst. 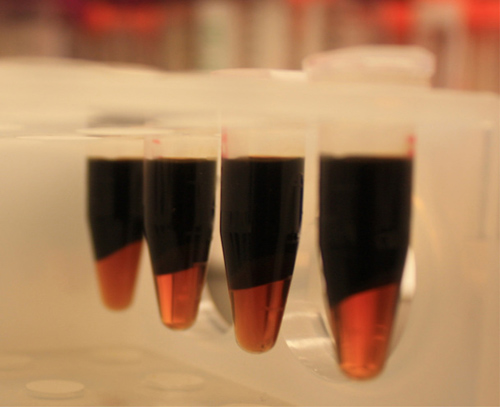 A new ionic liquid pretreatment of cellulosic biomass yields a biphasic solution, a lower phase rich in sugar and an upper phases rich in ionic liquid. (Image courtesy of Simmons/JBEI)

“Imidazolium is the most effective known ionic liquid for  breaking down lignocellulose and the chloride anion is amenable with the acid catalyst,” Simmons says. “The combination makes it easy to extract fermentable sugars that have been liberated from biomass and also easy to recover the ionic liquid for recycling. By eliminating the need for enzymes and decreasing the water consumption requirements of more traditional ionic liquid pretreatments we should be able to reduce the costs of sugar production from lignocellulose.”

Complete separation of the pretreatment solution into sugar-rich water and lignin-rich ionic liquid phases was attained with the addition to the solution of sodium hydroxide. The optimized sodium hydroxide concentration for both phase separation and sugar extraction was 15-percent, resulting in the recovery of maximum yields of 54-percent glucose and 88-percent xylose. The JBEI researchers believe these sugar yields can be increased by optimizing the process conditions and using more advanced methods of phase separation and sugar recovery.

“After optimizing the process conditions, our next step will be to scale the process up to 100 liters,” Simmons says. “For that work we will use the facilities at the Advanced Biofuels Process Demonstration Unit.”

This research was supported by the DOE Office of Science, which also supports NERSC.