As towns across Cape Cod struggle with problems stemming from septic systems, a recent study by a Woods Hole Oceanographic Institution (WHOI) scientist focuses on one specific toxic by-product: mercury. In a study of local groundwater, biogeochemist Carl Lamborg found microbial action on wastewater transforms it into more mobile, more toxic forms of the element.

His findings were published in Environmental Science and Technology in November 2013.

Mercury (Hg) is a toxic trace metal. Wastewater contains small amounts of it, but Lamborg found the chemical processes that break down waste increase mercury levels in the ground and water.

Between 2010 and 2012 Lamborg measured the concentrations and various forms of mercury at sampling wells installed by U.S. Geological Survey surrounding a wastewater treatment site operated by the Massachusetts Military Reservation in western Cape Cod. Wastewater was disposed into the ground at this site from 1936 to 1995, creating a 3-kilometer-long plume of contaminants spreading downstream from this site. The plume travels about 200 meters per year through the aquifer and ends in a coastal saltwater pond.

“The amount of mercury flowing out of the watershed and into the ocean and these ponds is something like twice as much as it would be if wastewater was not being put into the ground,” said Lamborg, who analyzed the chemistry of the samples in his lab at WHOI. 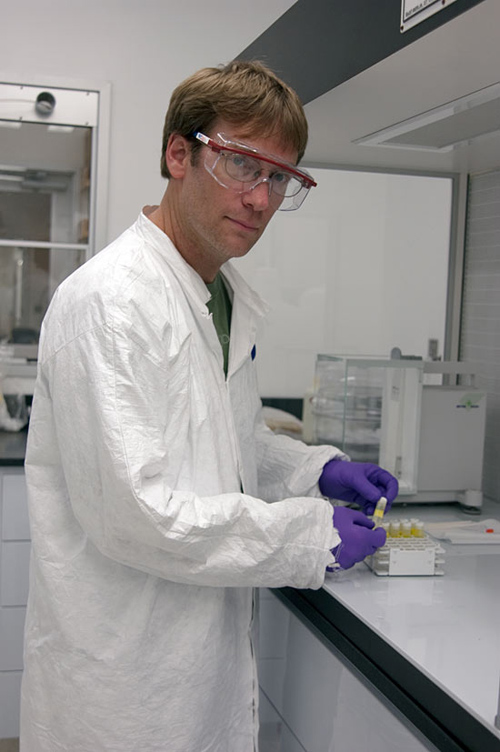 WHOI biogeochemist Carl Lamborg analyzes the mercury level in groundwater. He has found that the chemical process that breaks down waste from septic systems and wastewater disposal is causing mercury to accumule and move downstream into ponds and the ocean. (Photo by Danielle Fino, Woods Hole Oceanographic Institution)

To better understand why, he looked at two sites along the plume where microbes have broken down the carbon and nitrogen from the waste and have consumed all of the oxygen in the sediment and groundwater, making the sites anoxic.

Near the upstream point of entry, he found the microbes were using iron to break down the waste, a process called iron reduction. In this process, he observed the most common form of mercury, (Hg2+), which, he said, normally sticks to the sediment, was reduced into “less sticky” elemental mercury (Hg0) that more easily seeps into the groundwater and is transported downstream. 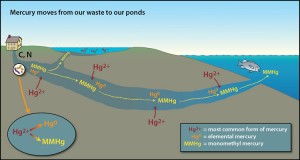 At various stages and locations along the wastewater plume, different forms and amounts of mercury are released. Where the wastewater is first deposited, the bacteria that break down the carbon and nitrogen from the waste consume all of the oxygen in the sediment and groundwater, making it anoxic. Microbes and bacteria switch to anaerobic respiration and the predominant form of mercury, ionic mercury (Hg2+), which sticks to the sediment, converts into elemental mercury (Hg0) and monomethylmercury (MMHg), which do not stick and are more mobile. Once they enter the groundwater, Hg0 and MMHg can easily move downstream. MMHg is the form of mercury found in some fish that has a detrimental impact on human health. Illustration by Jack Cook, Woods Hole Oceanographic Institution (Click image to enlarge)

At a second sample site further downstream, he found a high concentration of another type of mercury, monomethylmercury (MMHg), which accumulates in fish at toxic levels and can be detrimental to human health.

“In some cases, 100 percent of the mercury present at that location was MMHg,” he said. This form of mercury also easily moves through the water and can accumulate in ponds and the ocean, where fish and other animals absorb it.

He quickly adds that the level of MMHg is not high enough to make the water dangerous to drink. However, the concentration would be even lower if wastewater had not been disposed into the ground in the first place.

“This should make us all think twice about what we dump into the ground. Adding more nitrogen into the ground through wastewater, and even fertilizers for our agricultural fields and golf courses, offers a potential for mercury to accumulate and move through the aquifer to our ponds, lakes, and the ocean. That’s something I don’t think people are really thinking about,” he said.

“This kind of thing where you see denitrification resulting in the methylation of mercury has never been observed before,” he said.

Lamborg is pursuing funding to support the next steps in this research to illuminate what is triggering these chemical changes in the mercury. 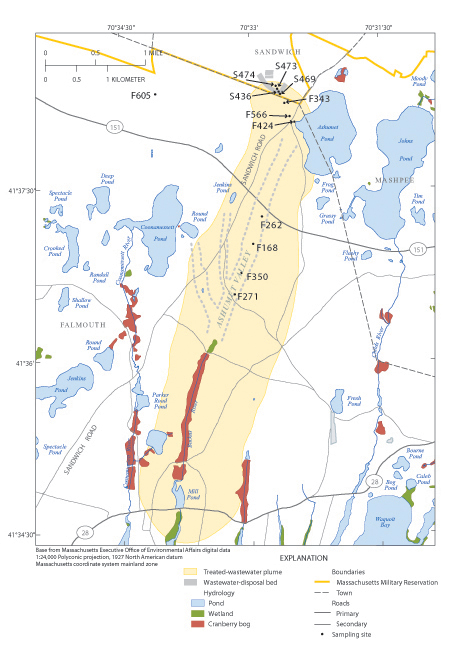 A map of the region where wastewater was disposed into the ground from 1936 to 1995, creating a 3-kilometer-long plume of contaminants spreading downstream to ponds and the ocean. The U.S. Geological Survey has installed sampling wells (labeled with black letters and numbers) to monitor the contaminants along the plume. (Map by Denis LeBlanc and Gillian Fairchild, U.S. Geological Survey)

Accumulating out of sight

Curiously, there is even more mercury in the plume than was originally deposited from the wastewater and produced by the waste-eating microbes. So where is it coming from?

“What it looks like is, the mercury that was already there in the aquifer or sand is being mined out when the groundwater goes anoxic,” said Lamborg. Mercury that has been stored in the ground for several thousands of years is being drawn out and is now on the move.

Along the Ashumet Valley, a 3-kilometer depression between the towns of Falmouth, Sandwich, and Mashpee, Mass., mercury continues to accumulate and move downstream in a plume ending in Green Pond in East Falmouth.

According to Lamborg, it’s a community-wide problem. Because the soil on Cape Cod is sandy, waste dumped into the ground disappears quickly. Although it may seem out of sight and out of mind, the contaminants such as mercury accumulate and resurface in the ponds and ocean.

“This is just one really big example, but it’s happening in a small way through everybody’s backyard septic system, which leaches a little bit of mercury out of the aquifer and accumulates. You don’t need a really big industrial scale thing for this to happen. It’s happening everywhere,” Lamborg said.