An international research team has discovered that a pervasive human RNA modification provides the physiological underpinning of the genetic regulatory process that contributes to obesity and type II diabetes.

European researchers showed in 2007 that the FTO gene was the major gene associated with obesity and type II diabetes, but the details of its physiological and cellular functioning remained unknown.

Now, a team led by University of Chicago chemistry professor Chuan He has demonstrated experimentally the importance of a reversible RNA modification process mediated by the FTO protein upon biological regulation. He and 10 co-authors from Chicago, China and England published details of their findings in the Oct. 16 advance online edition of Nature Chemical Biology.

He and his colleagues have shown, for the first time, the existence of the reversible RNA modification process — called methylation — and that it potentially impacts protein expression and function through its action on a common RNA base: adenosine. The process is reversible because it can involve the addition or removal of a methyl group from adenosine. The team found that the FTO protein mediates cellular removal of the methyl group. 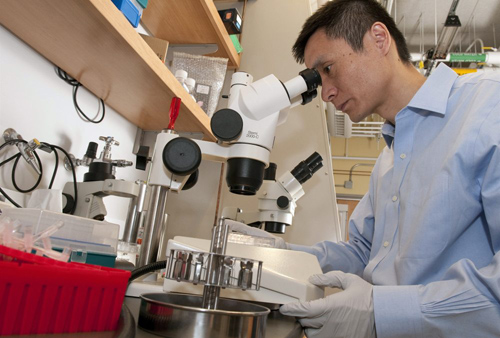 Chuan He, professor in chemistry, works in his laboratory in the Gordon Center for Integrative Science. He led an international research team that has experimentally demonstrated that RNA modification wields greater genetic influence than previously suspected. Photo by Lloyd DeGrane

“An improved understanding of the normal functions of FTO, as exemplified by this work, could aid the development of novel anti-obesity therapies,” said Stephen O’Rahilly, professor of clinical biochemistry and director of the Metabolic Research Laboratories at the University of Cambridge. O’Rahilly, a leading researcher in obesity and metabolic disease who also has studied FTO, was not directly involved in He’s project.

“Variants around the FTO gene have consistently been associated with human obesity and artificial manipulation of the fto gene in mice clearly demonstrates that FTO plays a crucial role in the regulation of body weight,” O’Rahilly explained. “However, the development of a deeper understanding of the normal biological role of FTO has been challenging.” 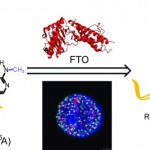 Prof. Chuan He has led researchers who have identified a dynamic new cellular pathway, represented here in molecular form, in the genetic regulatory process that contributes to obesity and type II diabetes. The immunofluorescence image at lower center shows individual protein and messenger RNA components in human cells. Illustration by Ye Fu

Scientists already had demonstrated that FTO removes methyl groups from nucleic acids, but only on one rare type of DNA or RNA methylation. The new research from He and his colleagues shows that FTO also acts on the common messenger RNA modification called N6-methyladenosine, O’Rahilly said.

The paper arose from He’s investigations of the AlkB family of proteins that act on nucleic acids. Based on this work, He and his collaborators proved that human cells exhibit reversible methylation of RNA bases, which significantly impact critical life processes.

Every human messenger RNA carries on average three to six methylations on adenosine. Scientists knew these methylations were extremely important but their function remained a mystery, He said. “For the first time, we show that these methylations are reversible and play a key role in human energy homeostasis,” the process by which the body maintains a complex biochemical dynamic equilibrium.

The finding may open a new research field — RNA epigenetics — for delving into the realm of biological regulatory processes, He said. The epigenetics of DNA and histones (proteins that package DNA in human cells) have become well-explored topics on the frontiers of biological research over the last 10 to 20 years. “It is safe to say 50 percent of biologists work on subjects related to epigenetics one way or another,” He said.

DNA (deoxyribonucleic acid) for decades has reigned as king over biological research on epigenetics of nucleic acids, as He noted in the December 2010 issue of Nature Chemical Biology. RNA (ribonucleic acid) modification was regarded more as a vassal that merely fine-tunes gene expression and regulation, until this recent discovery, which confirms the speculation by He and others that RNA modification has secretly wielded a far greater genetic influence than anyone had previously suspected. That’s why, as He wrote last year, “reversible RNA modification might represent another realm for biological regulation in the form of ‘RNA epigenetics.’”