Genetic information provided by a large group of specially designed mice could pave the way to faster human health discoveries and transform the ways people battle and prevent disease.

In 15 papers published Feb. 16 in the Genetics Society of America journals Genetics and G3:Genes/Genomes/Genetics, researchers from North Carolina State University, the University of North Carolina at Chapel Hill, The Jackson Laboratory and other universities and labs across the globe highlight a new genetic resource that could aid development of more effective treatments for any number of human diseases. 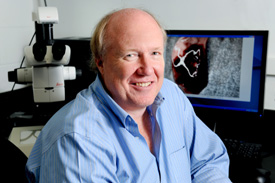 Dr. David Threadgill originally proposed the idea for the Collaborative Cross mice and serves as a leader of the project. Image credit: North Carolina State University

The resource, known as the Collaborative Cross (CC), is a reference manual of genetic variation contained in hundreds of specially-bred mice and their genetic sequences. The CC mice have much more genetic variation than normal lab mice, and thus more closely mirror the genetic complexity found in humans.

Moreover, the mice and their genetic sequences will be publicly available, allowing researchers around the world to work with mice that have particular genetic variations.

“If you can’t mimic the genetic variation in people, you can’t necessarily use mouse findings to understand more about human disease,” says Dr. David Threadgill, professor and department head of genetics at NC State who originally proposed the idea for the CC project a decade ago and who serves as one of the project leaders. Threadgill is also a member of the UNC Lineberger Comprehensive Cancer Center at UNC-Chapel Hill.

Threadgill developed the idea for the CC in order to harness the power of so-called whole genome studies that examine all genes at once instead of subsets of genes. Complex interactions between large numbers of genes frequently govern traits and behavior. Learning more about these interactions could help researchers tease out links between certain genes and certain diseases, for example.

In one of the 15 papers, Threadgill and corresponding author Dr. Francis S. Collins, director of the National Institutes of Health, identify key genes involved in red and white blood cell counts and red blood cell volume. These hematological parameters are important indicators of health and disease.

Project leaders include Dr. Fernando Pardo-Manuel de Villena of the UNC Department of Genetics, who is a member of UNC Lineberger Comprehensive Cancer Center, and Dr. Gary Churchill at The Jackson Laboratory. The international consortium participating in the development of the CC project includes NC State, UNC-Chapel Hill, The Jackson Laboratory, Tel Aviv University, Oxford University and Geniad/Australia. The mice are housed and “curated” at UNC-Chapel Hill.

The research was supported by grants from the National Institutes of Health; Ellison Medical Foundation; National Science Foundation; Australian Research Council; and the Wellcome Trust. The University Cancer Research Fund from the state of North Carolina also provided important funding.