New Information on the Waste-Disposal Units of Living Cells

Important new information on one of the most critical protein machines in living cells has been reported by a team of researchers with the U.S. Department of Energy’s Lawrence Berkeley National Laboratory (Berkeley Lab) and the University of California (UC) Berkeley. The researchers have provided the most detailed look ever at the “regulatory particle” used by the protein machines known as proteasomes to identify and degrade proteins that have been marked for destruction. The activities controlled by this regulatory particle are critical to the quality control of cellular proteins, as well as a broad range of vital biochemical processes, including transcription, DNA repair and the immune defense system.

“Using electron microscopy and a revolutionary new system for protein expression, we have determined at a subnanometer scale the complete architecture, including the relative positions of all its protein components, of the proteasome regulatory particle,” says biophysicist Eva Nogales, the research team’s co-principal investigator. “This provides a structural basis for the ability of the proteasome to recognize and degrade unwanted proteins and thereby regulate the amount of any one type of protein that is present in the cell.”

Says the team’s other co-principal investigator and corresponding author, biochemist Andreas Martin, “While the biochemical function of many of the proteasome components have been determined, and some subnanometer structures have been identified, it was unclear  before now which component goes where and which components interact with one another. Now we have a much better understanding as to how the proteasome machinery works to control cellular processes and this opens the possibility of manipulating proteasome activity for the treatment of cancer and other diseases.” 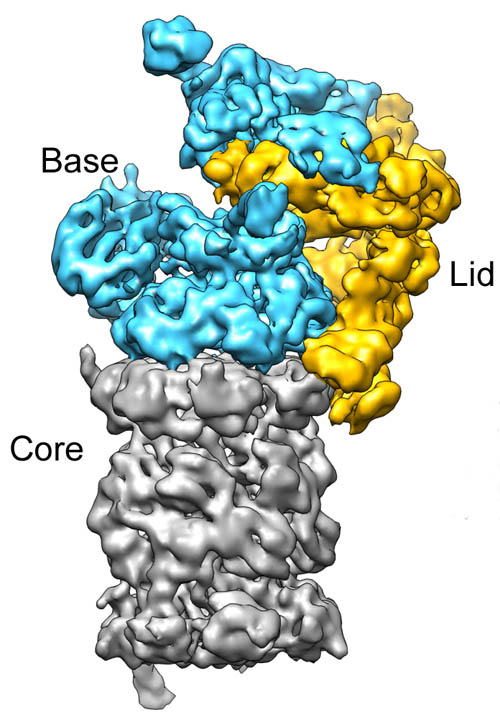 Berkeley researchers have provided the most detailed look ever at the “regulatory particle” used by proteasomes to identify and degrade proteins marked for destruction. The particle is organized into two sub-complexes, a “lid” and a “base.” Image credit: Berkeley Lab

Nogales, who holds appointments with Berkeley Lab, UC Berkeley, and the Howard Hughes Medical Institute, and Martin, who holds appointments with UC Berkeley and the QB3 Institute, are the senior authors of a paper describing this work in the journal Nature. The paper is titled “Complete subunit architecture of the proteasome regulatory particle.” Other co-authors were Gabriel Lander, Eric Estrin, Mary Matyskiela and Charlene Bashore.

At any given moment, a human cell typically contains about 100,000 different proteins, with certain proteins being manufactured and others being discarded as needed for the cell’s continued prosperity. Unwanted proteins are tagged with a “kiss-of-death” label in the form of a polypeptide called “ubiquitin.” A protein marked with ubiquitin is delivered to any one of the some 30,000 proteasomes in the cell – barrel-shaped complexes which act as waste disposal units that rapidly break-down or degrade the protein. The 2004 Nobel Prize in chemistry was awarded to a trio of scientists who first described the proteasome process, but a lack of structural information has limited the scientific understanding of the mechanics behind this process. 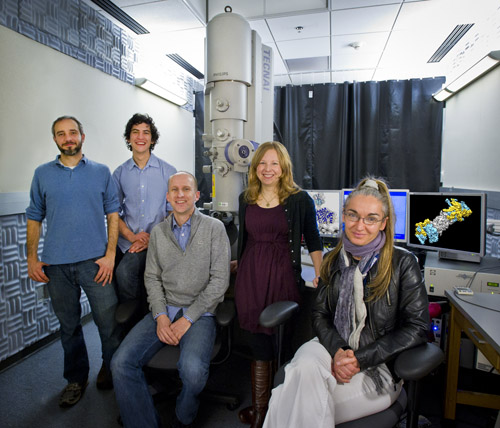 From left Gabriel Lander, Eric Estrin, Andreas Martin, Mary Matyskiela and Eva Nogales were members of the team that uncovered valuable new information about a protein complex that is critical to the quality control of cellular proteins, as well as a broad range of vital biochemical processes. (Photo by Roy Kaltschmidt, Berkeley Lab)

Nogales, an expert on electron microscopy and image analysis, and Martin, who developed the new protein expression system used in this work, combined the expertise of their respective research groups to study the proteasome regulatory particle in yeast. The particle features 19 sub-units that are organized into two sub-complexes, a “lid” and a “base.” The lid contains the regulatory elements that identify the ubiquitin tag marking a protein for destruction, and the base features a hexameric ring that pulls the tagged protein inside the chamber of the proteasome barrel where it is degraded.

The proteasome regulatory particle’s base contains six distinct AAA+ ATPases that form the hetero-hexameric ring, which serves as the molecular motor of the proteasome.

“We predict that the ATPases use the energy of ATP binding and hydrolysis to exert a pulling force on engaged proteins, unfolding and translocating them through a narrow central pore and into the degradation chamber,” Martin says. “The steps in the proteasome process – from protein recognition to de-ubiquitination and degradation have to be very highly coordinated in time and space. Locating all of these components and identifying their relative orientations has been very telling about how the processes are coordinated with each other.”

Nogales credits the protein expression system developed by Martin and his research group, in which proteins are expressed and assembled in bacteria, as being critical to the success of this research.

“Until now researchers had to work with purified protein complexes from the cell, which could not be manipulated or modified in any way,” she says. “Andy Martin’s new heterologous expression system allows for the manipulation and dissection of protein functions. For our studies it was crucial to generate lid sub-complexes that had one marker at a time in each of the subunits so that we could determine the position of each protein within the lid. With this new system we generated truncations, deletions and fusion constructs that were used to localize individual subunits and delineate their boundaries within the lid.”

This research was supported by funds from UC Berkeley, Berkeley Lab, the National Institutes of Health, the Searle Scholars Program, the Damon Runyon Cancer Research Foundation, the American Cancer Society, the National Science Foundation and the Howard Hughes Medical Institute.