PASADENA, Calif. – Astronomers using data from NASA’s Kepler mission have discovered the three smallest planets yet detected orbiting a star beyond our sun. The planets orbit a single star, called KOI-961, and are 0.78, 0.73 and 0.57 times the radius of Earth. The smallest is about the size of Mars.

All three planets are thought to be rocky like Earth but orbit close to their star, making them too hot to be in the habitable zone, which is the region where liquid water could exist. Of the more than 700 planets confirmed to orbit other stars, called exoplanets, only a handful are known to be rocky.

“Astronomers are just beginning to confirm the thousands of planet candidates uncovered by Kepler so far,” said Doug Hudgins, Kepler program scientist at NASA Headquarters in Washington. “Finding one as small as Mars is amazing, and hints that there may be a bounty of rocky planets all around us.”

Kepler searches for planets by continuously monitoring more than 150,000 stars, looking for telltale dips in their brightness caused by crossing, or transiting, planets. At least three transits are required to verify a signal as a planet. Follow-up observations from ground-based telescopes also are needed to confirm the discoveries. 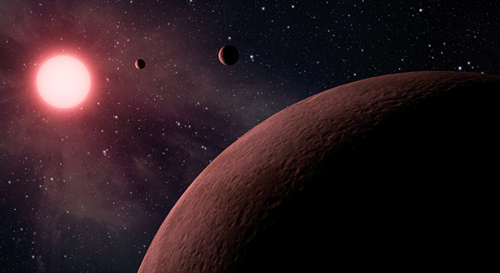 This artist's concept depicts an itsy bitsy planetary system -- so compact, in fact, that it's more like Jupiter and its moons than a star and its planets. Image credit: NASA/JPL-Caltech

The latest discovery comes from a team led by astronomers at the California Institute of Technology in Pasadena. The team used data publicly released by the Kepler mission, along with follow-up observations from the Palomar Observatory, near San Diego, and the W.M. Keck Observatory atop Mauna Kea in Hawaii. Their measurements dramatically revised the sizes of the planets from what was originally estimated, revealing their small nature.

The three planets are very close to their star, taking less than two days to orbit around it. The KOI-961 star is a red dwarf with a diameter one-sixth that of our sun, making it just 70 percent bigger than Jupiter.

“This is the tiniest solar system found so far,” said John Johnson, the principal investigator of the research from NASA’s Exoplanet Science Institute at the California Institute of Technology in Pasadena. “It’s actually more similar to Jupiter and its moons in scale than any other planetary system. The discovery is further proof of the diversity of planetary systems in our galaxy.”

Red dwarfs are the most common kind of star in our Milky Way galaxy. The discovery of three rocky planets around one red dwarf suggests that the galaxy could be teeming with similar rocky planets.

“These types of systems could be ubiquitous in the universe,” said Phil Muirhead, lead author of the new study from Caltech. “This is a really exciting time for planet hunters.”

The discovery follows a string of recent milestones for the Kepler mission. In December 2011, scientists announced the mission’s first confirmed planet in the habitable zone of a sun-like star: a planet 2.4 times the size of Earth called Kepler-22b. Later in the month, the team announced the discovery of the first Earth-size planets orbiting a sun-like star outside our solar system, called Kepler-20e and Kepler-20f.

For the latest discovery, the team obtained the sizes of the three planets (called KOI-961.01, KOI-961.02 and KOI-961.03) with the help of a well-studied twin star to KOI-961, Barnard’s Star. By better understanding the KOI-961 star, they could then determine how big the planets must be to have caused the observed dips in starlight. In addition to the Kepler observations and ground-based telescope measurements, the team used modeling techniques to confirm the planet discoveries.

Prior to these confirmed planets, only six other planets had been confirmed using the Kepler public data.

For information about the Kepler mission, visit: https://www.nasa.gov/kepler .