*UA alumnus Paul Nosa travels with his solar powered sewing machine, stitching patches of the thoughts people choose to share with him.*

A musician and formally trained artist who studied sculpture at the University of Arizona, Nosa is accustomed to art that is organized and linear.

But his current work stands in stark opposition.

Nosa is trying to raise $7,500 by Jan. 24 for a U.S. tour to share his artwork and promote his ideals around creativity and alternative energy sources.

And what he does is sew people’s imaginations onto patches – or mini canvases – using a sewing machine powered by solar power or a bicycle electric generator. 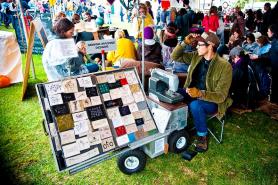 What would you do to spread a belief you so passionately hold? UA alumnus Paul Nosa is in the process of raising $7,500 to travel around the nation, sharing his artwork and encouraging people to be and think more creatively. (Photo courtesy of Paul Nosa)

“When you do a patch, it’s just this little piece of fabric. It’s nothing, really, so it frees up the creative process,” said Nosa, who earned an interdisciplinary studies degree from UA with a focus in creative writing, French and sculpture. “You can do anything, so the ideas just explode.”

Nosa, who has spent about seven years creating sewing art, is fundraising though Kickstarter to travel to Los Angeles, San Francisco, Seattle, Chicago, Boston and New York and elsewhere to share his work.

“I’m trying to get people to think creatively and to get them to use their imaginations, which apparently, over the last seven years doing this, I realize most people have a hard time with,” said Nosa, who has done several tours in the past in a range of West Coast cities and also New York, Pittsburgh and Philadelphia.

“I was a terrible notetaker in high school because I was like, ‘Forget the notes, I’m just going to draw pictures,'” said Nosa, who has since amassed more than four dozen sketchbooks. 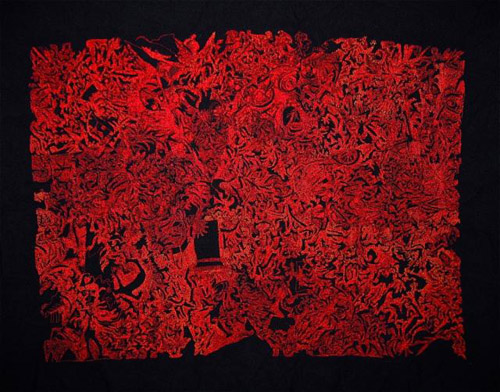 "Window Untouched" is one of Paul Nosa's fine artworks. But his day-to-day pieces are much smaller and more spontaneous: raw edges, rough cuts and wavering lines informed by the imagination of individuals who stop, often in awe, as he sews. (Photo courtesy of Paul Nosa)

But it was during a UA sculpture class that he realized how much he missed drawing and doodling.

“Those little doodles began what I started doing all the time,” he said, adding that he made an active interest producing abstract art, only recently returning to realism – but without the pressure of perfectionism.

Then Nosa began to wonder if it would be possible to draw using a centuries-old bit of technology – the sewing machine.

“I would not be able to sew like this if I didn’t draw so much,” said Nosa who has, to date, made thousands of patches with conceivably millions of stitches.

“I believe all of life’s questions can be answered with a sewing machine,” said Nosa, who uses a commercial-grade Singer CG590 and build a mobile station – the Solar Sewing Rover – so he could take his work to the streets. 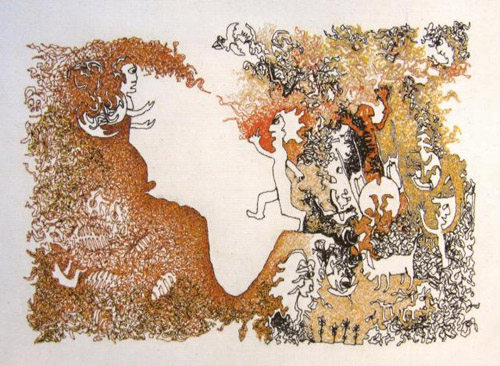 "The Imminent Truth" is one of Nosa's fine art pieces. His patches are created on the spot and have included a bandana with a toupee eating a carrot, a tree with faces in it, an hybrid elephant fish, a man-dog, headphones enveloped around a bright red heart. (Photo courtesy of Paul Nosa)

Nosa draws a connection between sewing and function. “A friend of mine once told me, ‘You can just sew more cash,'” he said. Nosa also has found that the machine and sewing skills often are equated with fixing and repair. “People will say to me, ‘Oh. You can fix things.'”

But his work is more about the creative process and about relying more heavily to alternative sources of energy.

In promoting his work and encouraging people to open their minds, Nosa asks them to describe a scenario in five words, or less.

When an idea comes, Nosa sets off into to his improvisation, stitching the imagined scenario onto square and rectangular pieces of cloth, using a whole range of thread colors. For his on-the-spot patches, Nosa generally will charge only a few dollars.

The sewing comes in fluid, unrehearsed form. No templates are used. And the work is powered by pure imagination. In the process of stitching, Nosa said he has learned something about people that troubled him.

“A majority of the people are surprisingly censored. They want their idea to be good. They don’t want to say a bad idea and look foolish,” Nosa said.

“But thinking it is a bad idea is like a crime against the art,” he said. “If you worry about it before it gets out, you won’t get anything done; nothing comes out.”

This is what Nosa, in his individual work and travels, is working to help resolve.

“There’s writer’s block, but I don’t believe there is an artist’s block,” Nosa said. “I’m trying to help people to get past that barrier and to be careful,” he said, “and to learn that being creative is not that hard to do.”

And, now, Nosa can see no other way.

“It’s very intertwined in my living. It’s so included in breathing and being alive,” Nosa said. “If I don’t do something, it’s almost like I didn’t live that day. It’s just a part of my being.”