Like any 28 year old, Arif Jetha, a fourth-year PhD candidate at the University of Toronto’s Dalla Lana School of Public Health, is worrying about his future. Once he completes his PhD, should he remain at home with his parents and pursue post-doctoral work or move on to full-time employment and begin establishing his career?

Then, he thinks about the participants in his Young Adult, Health and Employment Study (YHES) ) and realizes his own challenges pale in comparison to theirs. They are 18- to 30-year-olds who live with disabling health conditions such as lupus, juvenile arthritis and spinal cord injuries, and the transition to adulthood and employment is often exacerbated by their health status.

“Employment is a critical social determinant to the health of all Canadians, yet young people living with disabling health conditions are less likely to be employed,” said Jetha, adding that “young adulthood is a critical age for intervention where young people establish their careers.” 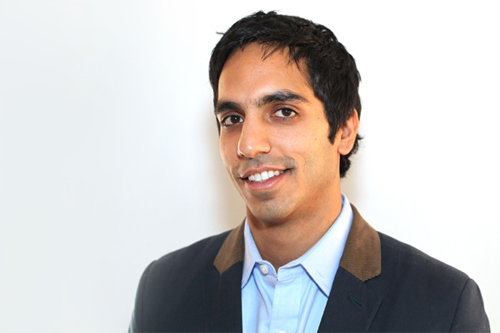 Arif Jetha, a PhD candidate in public health, is exploring the intersection of health, chronic illness and employment. (Photo by Jon Horvatin)

According to Jetha, chronic diseases are more common than most people think. There are more than 150,000 youth between the ages of 15 to 24 living with a disability in Canada, with musculoskeletal disorders such as arthritis, osteoporosis, major limb trauma and spinal disorders among the most prevalent.

Compounding the problem are the associated healthcare costs and other costs to the employees and employers, such as short-term disability, absenteeism and underemployment. Data from the Public Health Agency of Canada finds musculoskeletal diseases account for $22 billion in total costs to the Canadian economy.

In spite of these statistics, Jetha says little is known about the experiences of young adults living with juvenile arthritis, lupus or spinal cord injury who are transitioning to adulthood. This gap in the research led Jetha to his doctoral research.

In 2011, with funding from the Canadian Institutes of Health Research, he began the YHES study, in collaboration with academics and clinicians from across Canada, to find out how living with a chronic, disabling health condition affects employment among young adults.

Although his study is still in progress, he shared some preliminary findings during a recent talk at the Munk School for Global Affairs.

Of the 118 study participants, close to 60 per cent were employed and 25 per cent were enrolled in school while the rest were not currently working. However, one-third of the employed population was working part time, a result that could suggest his sample group is underemployed.

Jetha noted there are also a range of other factors that influence employment including, gender, age, severity of condition, and social support. He also cautioned that his findings need to be drawn out further through analysis, but they do suggest a potential relationship between not being employed and having a severe health status.

“I plan to test some of these significances as I move on,” added Jetha. “I also plan to go further into some of the disease-specific measures that I’ve collected to further understand how specific aspects of these health conditions can affect employment.”

Based on his preliminary results, Jetha said recommendations can be made to improve employment participation for young people living with chronic health conditions.  For example, companies can go beyond offering health insurance to make job modifications such as flexible work schedules and maintain better awareness of existing government policies designed to remove barriers to employment.

“One of the key aspects I hope to accomplish from this work is to prepare the results so that they are understandable and usable by policy makers, community groups as well as consumers and their families,” added Jetha.