BURBANK, Calif. — June 3, 2011 — When the team behind the latest Tron:Legacy Project project website started their work, they had in mind one goal: raise the bar for what a graphic novel could be like online. “Most online comics are stagnant,” says Dario Di Zanni, development manager for Disney publishing digital media. “We wanted an engaging, fluid site that is more like the actual experience of reading a comic book.”

Originally released by Disney in 1982, the classic science-fiction film “Tron” has spawned comics, games, books and a television series based on the story of protagonist Sam, who is investigating his father’s disappearance 20 years earlier. Sam’s quest takes him on a solo journey through his father’s digital legacy.

In creating the latest Tron:Legacy Digital Book site, the Disney team wanted to both be innovative and stay true to the original storyline. They used the emerging Web standard, HTML5, to create unique visual storytelling effects. “It’s truly an interactive environment people don’t expect to see on a website,” said Ken Disbennett, art director for Vectorform, who worked closely on the project. “When a character is smashing through a glass wall, you can see and experience the glass particles shattering. We couldn’t have achieved this the way we did without the hardware acceleration in Internet Explorer 9 or the use of a plug-in.” 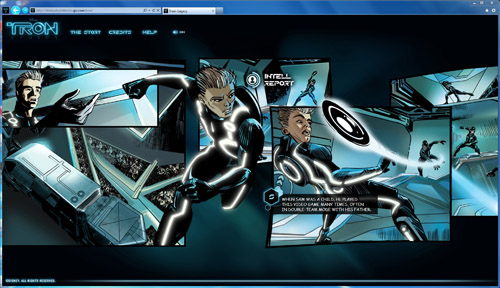 The website, timed to launch with the release of the new Tron:Legacy The Complete Story application, takes “Tron” fans through an original, interactive adventure. In addition to presenting a number of elements unique to the “Tron” storyline, the site makes use of unique programming features in Internet Explorer 9 to draw readers from left to right and show characters moving in and out of the foreground.

“It was important to us that the characters be presented in their own planes and spaces,” explains Disbennett, who says that Internet Explorer 9 features such as hardware-accelerated HTML5 canvas, audio tags and fast JavaScript engine were critical in bringing the site they imagined to life. “From a design perspective, HTML5 in Internet Explorer 9 really opens up a lot of possibilities,” he said.

Disney Publishing Global Editor Nachie Castro agrees. “This project has helped us grow in leaps and bounds toward a more authentic, online comic book experience,” says Castro. “We had a vision in our heads of what we wanted to create. By taking advantage of the potential of HTML5 and Internet Explorer 9, we were able to bring that vision to life.”