New Book Explores Fears About Muslims in The West

Fears of terrorism in Europe and the United States have deteriorated into an irrational suspicion of Muslims, which will continue until the West turns its critical eye inward, argues University of Chicago professor Martha Nussbaum in her new book, The New Religious Intolerance: Overcoming the Politics of Fear in an Anxious Age.

While fear is an important natural emotion, its self-centered nature makes it susceptible to irrational distortions that are harmful to others, writes Nussbaum, the Ernst Freund Distinguished Service Professor of Law and Ethics in the Law School and Philosophy. 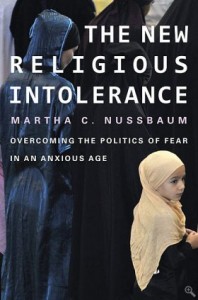 The New Religious Intolerance: Overcoming the Politics of Fear in an Anxious Age. Image credit: The University of Chicago

“Any self-knowledge worth the name tells you that others are as real as you are, and that your life is not just about you. It is about accepting the fact that you share a world with others, and about taking action directed at the good of others,” Nussbaum explains about the message she hopes to convey in the book.

In The New Religious Intolerance, Nussbaum explores religious prejudice through the lens of philosophy, literature and history. She argues that in order to “uncover the roots of ugly fears and suspicions that currently disfigure all Western societies,” Europe and the United States need to reassess the strength of their principles of equal respect, evaluate their narcissistic responses and develop “inner-eyes” to more easily imagine the lives of others.

Fear with no basis in evidence leads to dubious exclusions, she writes. As examples, Nussbaum questions the logic behind Switzerland’s ban against minarets in a country that has only four; European bans that single out Muslim headscarves and burqas from other religious dress; and the fervent resistance to a Muslim community center near “Ground Zero” in New York City — although neither an existing nearby mosque nor the neighboring strip clubs, liquor store and off-track betting parlor have caused any uproar.

“It’s not rational to dismiss the fear of Muslim terrorism. That fear is rational in the light of history and current events, and that rational fear ought to guide sensible public policy… but it’s simply not reasonable to believe that all one’s neighbors are fiends in disguise.” 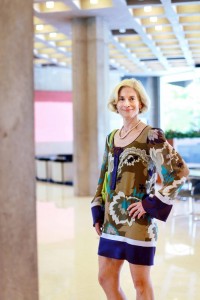 Nussbaum says that for the most part, Europe and particularly the United States understand what good political principles of equal respect should look like, but those principles remain vulnerable.

“They remain fragile, however, in times of fear,” Nussbaum writes. “Like railroad tracks, they guide the train well until some disaster, whether a system failure or an earthquake, causes it to go off the tracks. And today we see all too many cases in which panic is causing derailment.”

Nussbaum has seen attitudes toward Muslims spiraling downward in both Europe and the United States in the last decade after years of relative religious tolerance. Although Europe’s history has been peppered with events like the Crusades, the Wars of Religion, anti-Semitism, anti-Catholicism and Nazism, and the United States has in the past been less than hospitable toward Native Americans, Roman Catholics, Jews, Mormons and Jehovah’s Witnesses, the West had begun to pride itself on its openness and acceptance. That tolerance is now being jeopardized.

Nussbaum’s book grew out of a column she penned for The New York Times on the proposed burqa bans in Europe and a later response to the hundreds of passionate comments she received. Her book, in addition to being an intellectual exploration of the subject, is something of a call to arms to recapture the ideals of the pre-9/11 era and to stop the current rise of intolerance against Muslims before it is too late. These changes must be made not just at the political level, but also through individual reflection and imagination about the minority experience.

“That future is in the hands of the people,” writes Nussbaum.

“If we don’t all insist on decency and inclusion, the nation will subtly have become a different nation, one more suspicious of foreigners, more insistent on homogeneity,” she warns. “This would be a tremendous loss.”

*Souce: The University of Chicago