Microbes in the Mississippi

Professor and students study how microbial life changes along the river

The mercury is pushing 100, but professor Michael Sadowsky and two assistants leave the indoor coolness for the bank of the Mississippi River as it flows by the University of Minnesota Twin Cities campus.

The three men send a bucket splashing into the current and haul back a water sample. That doesn’t affect the river much, but information locked away in bacteria from the sample may tell them a great deal about how the river’s microbial communities change along its course through Minnesota and how human activity affects them. 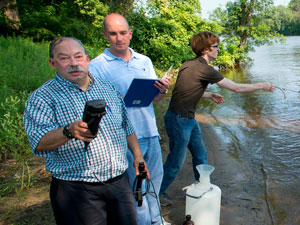 “Microorganisms really are the driving force—the engine—that runs our planet,” says Sadowsky, a microbiologist in the Department of Soil, Water and Climate and the BioTechnology Institute. “The idea was to start thinking about water quality in terms not just of E. coli—a fecal indicator bacterium—but of all the organisms present. [We wanted] to obtain samples along the Mississippi River … and examine the impact that human population has on the types and functions of microorganisms in the Mississippi River.”

Sadowsky heads the Minnesota Mississippi Metagenome Project (M3P), now in its fourth summer of analyzing the bacteria in the river to get the sum total of all the genetic information in the river. Through M3P, students and instructors turn bacterial samples into public catalogs of genetic data that any researcher can use.

Many samples, one big picture

The M3P researchers sample the river annually at 11 points stretching from its source at Lake Itasca to La Crescent, paying particular attention to the confluences of the Mississippi with the Zumbro, Minnesota, and St. Croix rivers. They analyze the bacterial DNA sequences from water samples taken at each site to identify species and genes present.

“When we do the DNA analysis, we get the relative numbers of each species to see which are most abundant,” says Trevor Gould, lab services coordinator for the University’s Biology Program and researcher in the M3P program. “We also [note] the land use at each site.”

“The most solid thing we see is that as you proceed from a pristine area [like Lake Itasca] to one less pristine, the composition changes,” says Sadowsky.

“I look at a bacterial community and try to relate the relative abundances of species to land use and ask, for example, ‘Does being in a farm area affect the microbial population differently from being in an industrial area?’” says Christopher Staley, a postdoctoral associate in the BioTechnology Institute. “In some cases, the answer is yes.”

Through the miracle of high-throughput DNA sequence technology, all the bacterial genetic material is sequenced and “barcoded”—that is, marked with an extra bit of DNA that reveals the time and location where each DNA sequence was taken from the river. In addition, the DNA recovered from the environment is incorporated (cloned) into E. coli.

Then the search for human influence is on; knowing where and how human activity influences bacteria is key if the activity is to be regulated or the river is to be cleaned up. For example, chemicals in the river can kill off bacteria that lack defenses against them, leaving any bacteria with genes for resistance to grow and thrive.

Students in an M3P-associated class test the E. coli for the presence of genes (taken from river bacteria) that confer resistance to heavy metals and antibiotics; the barcodes help narrow down which species evolved the resistance. The students also sequence the DNA in each bacterium. They then upload the DNA sequences they find to a database called Integrated Microbial Genomes, a project of the federal Department of Energy. Students in schools across the country can then compare those sequences to sequences of known genes, figure out how many genes the M3P students have found and what those genes do.

“This is discovery research of genes and microorganisms,” says Sadowsky. “We’re getting basic data on the state of the river for future comparison. We’d like to take it down the whole Mississippi and compare [our findings] to other rivers and lakes.”