AUSTIN, Texas — University of Texas at Austin researchers have demonstrated a new and more effective method for regrowing blood vessels in the heart and limbs — a research advancement that could have major implications for how we treat heart disease, the leading cause of death in the Western world.

The treatment method developed by Cockrell School of Engineering Assistant Professor Aaron Baker could allow doctors to bypass surgery and instead repair damaged blood vessels simply by injecting a lipid-incased substance into a patient. Once inside the body, the substance stimulates cell growth and spurs the growth of new blood vessels from pre-existing ones.

The method has been tested successfully on rats, and findings of the study were published recently in the Proceedings of the National Academy of Sciences.

“Others have tried using growth factors to stimulate vessel growth in clinical trials and have not been successful,” said Baker, a faculty member in the school’s Department of Biomedical Engineering. “We think that a major reason for this is that previous methods assumed that the diseased tissues retained the ability to respond to a growth stimulus. Our method basically delivers extra components that can restore growth factor responsiveness to the tissue of patients with long-standing clinical disease.”

Hindlimb ischemia was created in rats and treatments were delivered over seven days with an osmotic pump. The laser doppler imaging above shows the rat's hind limb prior to treatment (on the left) and with increased blood flow (image on the right) just seven days after treatment. Image credit: The University of Texas at Austin

The ability to regrow blood vessels could prove crucial to treating chronic myocardial ischemia disease, which affects up to 27 million patients in the U.S. and leads to a reduction of blood flow in the heart and lower limbs — ultimately causing organ dysfunction and failure.

Central ischemia, which affects the heart, occurs when the coronary vessels that feed blood to the heart become blocked or narrow because of a buildup of fatty deposits called plaques. Such plaques are typically the result of a prolonged unhealthy diet or smoking, and factors such as age, high blood pressure and diabetes increase the risks of the disease, Baker said.

Doctors have typically treated ischemia by physically opening the closed artery with a stent or surgically rerouting blood flow to the poorly perfused tissue. Both methods have limitations, however, and are not effective long-term. 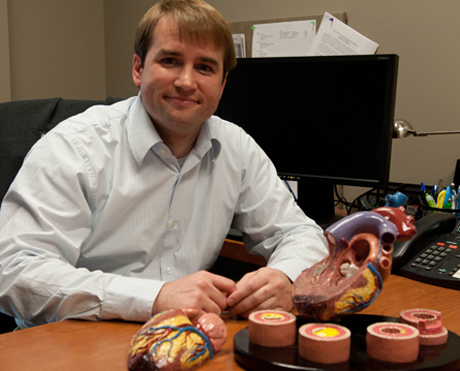 Aaron Baker is an assistant professor in the Department of Biomedical Engineering. Image credit: The University of Texas at Austin

The new method introduced by Baker and his research team builds on a promising revascularization approach that, up until now, has shown limited efficacy in clinical trials for treating human disease.

The method combines a growth factor — a substance capable of stimulating cellular growth, proliferation and cellular differentiation, as well as healing wounds — known as fibroblast growth factor 2 (FGF-2) with a lipid-embedded receptor to enhance its activity.

A challenge for scientists and engineers, however, has been getting FGF-2 to bind with cell receptors — the very molecules often found on the surface of the cell that receive chemical signals and direct activity in the cell from outside sources.

The incased substance was injected into rats with hindlimb ischemia and stimulated a complete recovery from the ischemia in just seven days.

“We hope this research will increase our understanding of how tissues become resistant to revascularization therapies and may lead to more effective treatments for this widespread and debilitating disease,” said Baker, who was recognized last year with the National Institutes of Health Director’s New Innovator Award.

Designed to support unusually creative new investigators with highly innovative research ideas at an early stage of their careers, the award provides Baker with $1.5 million over five years to study and develop ways to regrow small blood vessels. With it, Baker is studying why previous attempts to restore blood flow to the heart have not been effective. His research aims to design new molecular tools and drug delivery methods to enable blood vessel growth in patients with diseases such as diabetes.