AUSTIN, Texas — Your brain transmits information about your current location and memories of past locations over the same neural pathways using different frequencies of a rhythmic electrical activity called gamma waves, report neuroscientists at The University of Texas at Austin.

The research, published in the journal Neuron on April 17, may provide insight into the cognitive and memory disruptions seen in diseases such as schizophrenia and Alzheimer’s, in which gamma waves are disturbed.

Previous research has shown that the same brain region is activated whether we’re storing memories of a new place or recalling past places we’ve been. 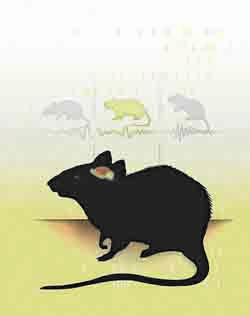 “Many of us leave our cars in a parking garage on a daily basis. Every morning, we create a memory of where we parked our car, which we retrieve in the evening when we pick it up,” said Laura Colgin, assistant professor of neuroscience and member of the Center for Learning and Memory in The University of Texas at Austin’s College of Natural Sciences. “How then do our brains distinguish between current location and the memory of a location? Our new findings suggest a mechanism for distinguishing these different representations.” 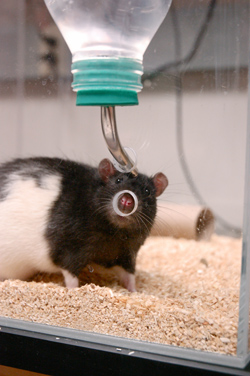 Researchers recorded gamma waves in the brains of rats navigating through a simple environment to understand how current and past locations are represented in the brain. Image credit: Laura Colgin/University of Texas at Austin

“These findings suggest that fast gamma waves promote current memory encoding, such as the memory of where we just parked,” said Colgin. “However, when we need to remember where we are going, like when finding our parked car later in the day, the hippocampus tunes into slow gamma waves.”

Because gamma waves are seen in many areas of the brain besides the hippocampus, Colgin’s findings may generalize beyond spatial memory. The ability for neurons to tune into different frequencies of gamma waves provides a way for the brain to traffic different types of information across the same neuronal circuits.

Colgin said one of the next steps in her team’s research will be to apply technologies that induce different types of gamma waves in rats performing memory tasks. She imagines that they will be able to improve new memory encoding by inducing fast gamma waves. Conversely, she expects that inducing slow gamma waves will be detrimental to the encoding of new memories. Those slow gamma waves should trigger old memories, which would interfere with new learning.

Support for this research was provided by the Esther A. and Joseph Klingenstein Fund, the Alfred P. Sloan Foundation and the National Institute of Mental Health.

Colgin’s co-authors at The University of Texas at Austin were graduate student Kevin Bieri and research assistant Katelyn Bobbitt.