A University of Utah-led team discovered a “hypervelocity star” that is the closest, second-brightest and among the largest of 20 found so far. Speeding at more than 1 million mph, the star may provide clues about the supermassive black hole at the center of our Milky Way and the halo of mysterious “dark matter” surrounding the galaxy, astronomers say.

“The hypervelocity star tells us a lot about our galaxy – especially its center and the dark matter halo,” says Zheng Zheng, an assistant professor of physics and astronomy and lead author of the study published recently in Astrophysical Journal Letters by a team of U.S. and Chinese astronomers.

“We can’t see the dark matter halo, but its gravity acts on the star,” Zheng says. “We gain insight from the star’s trajectory and velocity, which are affected by gravity from different parts of our galaxy.” 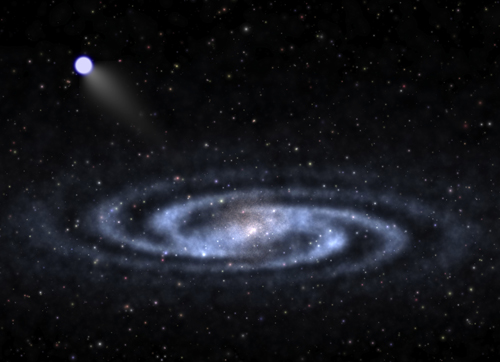 An astrophysicist-artist’s conception of a hypervelocity star speeding away from the visible part of a spiral galaxy like our Milky Way and into the invisible halo of mysterious “dark matter” that surrounds the galaxy’s visible portions. University of Utah researcher Zheng Zheng and colleagues in the U.S. and China discovered the closest bright hypervelocity star yet found. Photo Credit: Ben Bromley, University of Utah

In the past decade, astronomers have found about 20 of these odd stars. Hypervelocity stars appear to be remaining pairs of binary stars that once orbited each other and got too close to the supermassive black hole at the galaxy’s center. Intense gravity from the black hole – which has the mass of 4 million stars like our sun – captures one star so it orbits the hole closely, and slingshots the other on a trajectory headed beyond the galaxy.

Zheng and his colleagues discovered the new hypervelocity star while conducting other research into stars with the Large Sky Area Multi-Object Fiber Spectroscopic Telescope, or LAMOST, located at the Xinglong Observing Station of the National Astronomical Observatories of China, about 110 miles northeast of Beijing.

LAMOST boasts a 13.1-foot-wide aperture and houses 4,000 optical fibers, which capture “spectra” or light-wavelength readings from as many as 4,000 stars at once. A star’s spectrum reveals information about its velocity, temperature, luminosity and size.

LAMOST’s main purpose is to study the distribution of stars in the Milky Way, and thus the galaxy’s structure. The new hypervelocity star – named LAMOST-HVS1 – stood out because its speed is almost three times the usual star’s 500,000-mph pace through space: 1.4 million mph relative to our solar system. Its speed is about 1.1 million mph relative to the speed of the center of the Milky Way.

“If you’re looking at a herd of cows, and one starts going 60 mph, that’s telling you something important,” says Ben Bromley, a University of Utah physics and astronomy professor who was not involved with Zheng’s study. “You may not know at first what that is. But for hypervelocity stars, one of their mysteries is where they come from – and the massive black hole in our galaxy is implicated.” 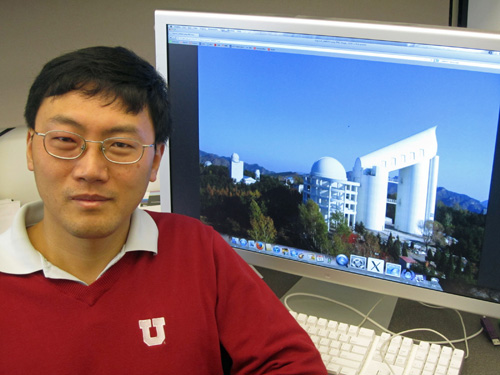 Zheng Zheng, an assistant professor of physics and astronomy at the University of Utah, led a team of American and Chinese scientists who discovered the closest bright hypervelocity star of 20 yet found. Scientists believe each hypervelocity star began as part of a binary pair of stars near the center of our Milky Way galaxy, where extreme gravity from a supermassive black hole sucked in one star in the pair and, like a bolo, simultaneously hurled the other star — a new hypervelocity star — toward the edge of the galaxy. Photo Credit: Lee J. Siegel, University of Utah

The Down-Low on a Fast and Loose Star

A cluster of known hypervelocity stars, including the new one, is located above the disk of our Milky Way galaxy, and their distribution in the sky suggests they originated near the galaxy’s center, Zheng says.

Scientists know dark matter halos surround galaxies because the way their gravity affects the motion of a galaxy’s visible stars and gas clouds. Researchers say only about 5 percent of the universe is made of visible matter, 27 percent is invisible and yet-unidentified dark matter and 68 percent is even more mysterious dark energy, responsible for accelerating the expansion of the universe. By traveling through the dark matter halo, the new hypervelocity star’s speed and trajectory can reveal something about the mysterious halo.

As far as that is – the star has a magnitude of about 13, or 630 times fainter than stars that barely can be seen with the naked eye – it nevertheless “is the nearest, second-brightest, and one of the three most massive hypervelocity stars discovered so far,” Zheng says.

The newly discovered hypervelocity star also outshines our own sun: It is four times hotter and about 3,400 times brighter (if viewed from the same distance). But compared with our 4.6-billion-year-old sun, the newly discovered LAMOST–HVS1 is a youngster born only 32 million years ago, based on its speed and position, Zheng says.

The study was funded by the U.S. National Science Foundation and the National Development and Reform Commission of China.