Have you ever dropped a stick into a river and wondered where it might go if it floated all the way downstream? Now you can trace its journey using Streamer – a new on-line service from the National Atlas of the United States®.

Streamer is an online map service that lets anyone trace downstream along America’s major rivers and streams simply by picking a point on a stream.  Streamer will map the route the stream follows. 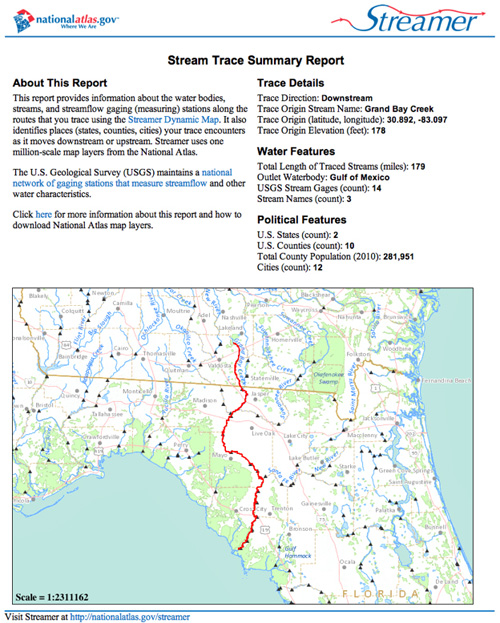 Map generated by Streamer highlighting a downstream trace along three major streams in Georgia and Florida that empty into the Gulf of Mexico. Image credit: U.S. Geological Survey

Streamer is fueled by digital hydrographic data for America at one million-scale (an inch is approximately 15.8 miles on the land surface).  These streams and water bodies are generalized from the highly detailed National Hydrography Dataset from The National Map

Streamer lets you navigate rivers in the United States the way other interactive maps help you drive your vehicle from one place to another.  Unlike our nation’s road network, which provides many choices for traveling between two locations, America’s surface waters are somewhat like a network of one-way streets.  You can certainly navigate upstream, but all water flows one way:  downhill.  Use Streamer to trace downstream along that downhill path or use Streamer to trace upstream to highlight rivers at higher elevations that flow to your starting point.

You could stand by the Mississippi River and wonder, “Where did this water come from? Where is it flowing?”  Or with Streamer you can launch your sense of wonder and discovery up and down any of America’s major rivers with a Web connection from your favorite computer or tablet. 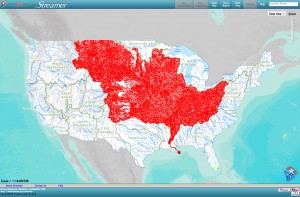 Map made by Streamer tracing upstream from the Mississippi River near New Orleans, Louisiana, highlighting more than 7,000 large streams that drain to the Gulf of Mexico. Image credit: U.S. Geological Survey (Click image to enlarge)