The models showed that the rigid, crescent-shaped red blood cells that are the hallmark of sickle cell disease don’t cause these blockages on their own. Instead, softer, deformable red blood cells known as SS2 cells start the process by sticking to capillary walls. The rigid sickle-shaped cells then stack up behind the SS2s, like traffic behind a car wreck.

The findings, published in Proceedings of the National Academy of Sciences, could provide a way to evaluate drug treatments aimed at easing or preventing sickle cell crisis, also known as vaso-occlusion.

“This is the first study to identify a specific biophysical mechanism through which vaso-occlusion takes place,” said George Karniadakis, professor of applied mathematics at Brown and the study’s senior author. “It was a surprising result because the common wisdom was that it was just the sickle cells that block the capillary.”

Sickle cell disease is a genetic condition that affects an estimated 75,000 to 100,000 people in the United States, mostly of African or Hispanic descent. Abnormal hemoglobin, the protein that enables red blood cells to carry oxygen, causes sickle cells to acquire their crescent shape and rigidity. That elongated shape and inability to bend were thought to be the reason sickle cells caused blockages in capillaries.

But while sickle-shaped cells are the hallmark of the disease, they’re not the only type of red blood cell present in people with the condition. Research from the 1980s found that there are actually four types of sickle red blood cells, and not all of them are rigid and sickle-shaped. One cell type, the SS2 cell, retains the round shape and the soft malleability of normal red blood cells.

“They look like healthy cells,” Karniadakis said, “except they’re sticky.” 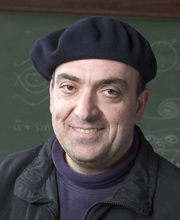 George Karniadakis. “In the end the rigid sickle cells are really playing a secondary role because the causality starts with the deformable cells that stick to the wall.” Image credit: Brown University

The SS2 cells have receptors on their membranes that cause them to adhere to the walls of blood vessels. Sickle-shaped cells have those same sticky proteins, but Karniadakis’s model showed that the SS2 cells are much more likely to get stuck. “Because [SS2 cells] are deformable, they have a larger contact area with the vessel wall, and so they stick better,” Karniadakis said.

Once those cells become stuck, they effectively make the vessel diameter smaller, causing the rigid sickle-shaped cells to get stuck behind them.

The models, based on experimentally derived data on real cells, allow the researchers to manipulate the cells’ characteristics to see which ones cause blood blockages. For example, if the researchers reduced the stickiness or softness of the SS2 cells, blockages failed to form. Likewise, if they reduced the rigidity of the sickle-shaped cells, blood kept flowing. It’s the two conditions working in tandem that causes the blockages, but the SS2 cells are the ones that start the cascade.

“In the end the rigid sickle cells are really playing a secondary role because the causality starts with the deformable cells that stick to the wall,” Karniadakis said.

The researchers hope that the models could be used to evaluate drugs aimed at treating sickle cell crisis.

“If a drug is trying to target the cells’ adhesive properties, or if it’s trying to make cells more flexible, we can test them and see if they prevent occlusion in the model,” Karniadakis said.

The first author on the paper is Huan Lei, a postdoctoral researcher in applied mathematics at Brown. The work was funded by the National Institutes of Health (R01HL094270) and the new Collaboratory on Mathematics for Mesocopic Modeling of Materials (CM4), supported by the Department of Energy. Computations were made possible by a DOE/Innovative and Novel Computational Impact on Theory and Experiment Award.