Dr. Mark Michalski is ready to print a 3-D brain (maybe yours)

In a year’s time, the 3-D printers at Yale’s Center for Engineering Innovation and Design (CEID) have churned out countless parts, prototypes, and curiosity-driven experiments in plastic — rotorheads and racecar uprights, cardiac pump pieces and thermostats, snowmen, keychains, and fantastical geometric shapes.

Radiology resident Dr. Mark Michalski uses them to print organs — arteries and bones, a liver, a heart, a knee.

“The next step will be a brain,” he said.

These “printouts” are not mere curiosities. They’re precise three-dimensional replicas of the idiosyncratic, usually diseased, anatomy of specific human patients — unique models that can be helpful to medical students, clinicians, and, Michalski hopes, patients trying to understand what’s happening inside their bodies.

“We can create things that will change the practice of medicine,” he said. 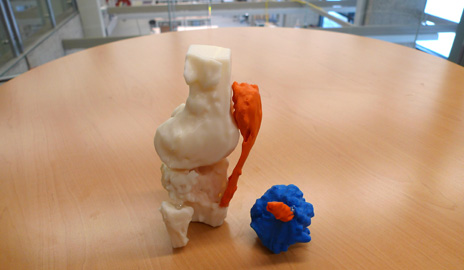 A Yale physician has begun using the 3D printers at Yale’s Center for Engineering and Innovation Design to make 3D organs — precise replicas of actual patients’ organs. Here, a knee with tumor. (Image by Yale CEID)

Ultimately, Michalski hopes to produce series of 3D anatomical printouts showing the progress of patients’ treatment — a way of communicating that he believes might also help them endure the unpleasant aspects of healing.

“If we can demonstrate the way that a tumor has changed with treatment, then we can help patients understand that all the nausea and vomiting wasn’t for naught,” he said of these theoretical cancer patients. “We can say, ‘It reduced the tumor — and I can show you exactly how much.’ Patients could wrap their palms around exact replicas of their own tumors at various stages of shrinkage.”

The August 2012 opening of the CEID, a design studio on Prospect Street that is part of the School of Engineering & Applied Science, has made Yale a more versatile place for experimenters like Michalski by providing both resources and organizational support for skilled but low-key invention — tools, materials, personnel, and space.

“Before the CEID there was no avenue for this at Yale,” said Joseph Zinter, the CEID’s assistant director and a lecturer in mechanical engineering and materials science. “Now, a physician at the medical school can say, ‘I have this idea and I’ll go to the CEID to explore it.’ We can help turn a good idea into a physical innovation, a real, tangible thing, and often very fast.”

Among the center’s resources are five 3-D printers, a technology for rapid automated fabrication, usually with plastics. The printers are available to all students, faculty, and research staff who become CEID members. Nearly 1,000 have done so already, representing nearly every school at Yale. Last fall, Michalski, a fourth-year radiology resident and Holman Research Fellow, was one of them.

He knew of attempts elsewhere to produce model anatomical organs with 3-D printers, as well as surgical implants, and thought he’d like to try. He was driven partly by curiosity, he said, and partly by an interest in developing new tools for patient communication.

Working in his spare time, Michalski began with a liver, then moved on to a liver with embedded tumor. One day Zinter noticed Michalski’s hospital badge and, excited by a physician’s presence at the CEID, asked what he was working on. “Lung vessels,” Michalski told him, and a partnership was born. “‘You have our full attention,’” Zinter told him. “‘We will support you in every way.’”

“For us,” Zinter said later, “this was a natural bridge to the medical community, to influencing patient outcomes.”

Michalski eventually showed a replica of a child’s heart, with anatomical defects, to a group of pediatric cardiologists. “One of them said, ‘Wow, you can do that?’ And they immediately started talking about ways they could use it to plan non-invasive, catheter-based inventions,” Michalski said. “That’s what got me thinking this could also be a service we could provide clinicians.”

In early June, he and Zinter got the chance. A colleague told Michalski that Dr. Dieter Lindskog, an orthopedic surgeon at Yale, was preparing for a complicated surgery on a man’s knee and the large tumor growing in it. Lindskog liked the idea of having a 3D model of what he would ultimately see inside. But he would need it soon.

“We had nine days,” said Michalski. “We wanted this to be exact, as close, as true to anatomical detail as possible. Potentially, medical decisions would be made using it.”

Michalski began with MRI images of the knee, using specialized software to convert them into data the 3D printers could interpret. He delivered the data files to Zinter and Yusuf Chauhan, a full-time design intern in the CEID, who managed the fabrication process.

“We ran the machine for 24 hours,” Zinter said.

The final product was a lightweight, plastic 1:1 scale model of the knee — including femur, fibula, tibia, patella, tendon, and the tumor.

Normally Lindskog would prepare for the operation using two-dimensional, cross-sectional imaging and extrapolate the tumor’s exact location, he said.

“The 3D model allowed me to see and feel the actual tumor location in the bone and helped me plan the cuts to remove it,” he said. “When the technology allows faster printing this will have very broad applications for surgical planning.”

Zinter and the CEID staff are already at work on other projects with uses in medicine, including a customized iPhone case that can accommodate a portable laryngoscope. It’s intended to help physicians working outside a fully equipped medical facility — in a field clinic, for example — shoot, save, and transmit video of laryngoscope examinations.

Michalski said he’s ready to move on to a brain. He’s just searching for the right one.