PASADENA, Calif. — Data from Voyager 1, now more than 11 billion miles (18 billion kilometers) from the sun, suggest the spacecraft is closer to becoming the first human-made object to reach interstellar space.

Research using Voyager 1 data and published in the journal Science today provides new detail on the last region the spacecraft will cross before it leaves the heliosphere, or the bubble around our sun, and enters interstellar space. Three papers describe how Voyager 1’s entry into a region called the magnetic highway resulted in simultaneous observations of the highest rate so far of charged particles from outside heliosphere and the disappearance of charged particles from inside the heliosphere.

“This strange, last region before interstellar space is coming into focus, thanks to Voyager 1, humankind’s most distant scout,” said Ed Stone, Voyager project scientist at the California Institute of Technology in Pasadena. “If you looked at the cosmic ray and energetic particle data in isolation, you might think Voyager had reached interstellar space, but the team feels Voyager 1 has not yet gotten there because we are still within the domain of the sun’s magnetic field.” 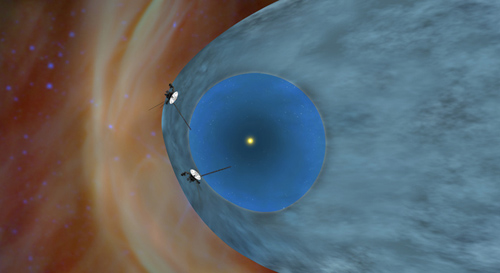 This artist’s concept shows NASA’s two Voyager spacecraft exploring a turbulent region of space known as the heliosheath, the outer shell of the bubble of charged particles around our sun. Image Credit: NASA/JPL-Caltech

Scientists do not know exactly how far Voyager 1 has to go to reach interstellar space. They estimate it could take several more months, or even years, to get there. The heliosphere extends at least 8 billion miles (13 billion kilometers) beyond all the planets in our solar system. It is dominated by the sun’s magnetic field and an ionized wind expanding outward from the sun. Outside the heliosphere, interstellar space is filled with matter from other stars and the magnetic field present in the nearby region of the Milky Way.

Voyager 1 and its twin spacecraft, Voyager 2, were launched in 1977. They toured Jupiter, Saturn, Uranus and Neptune before embarking on their interstellar mission in 1990. They now aim to leave the heliosphere. Measuring the size of the heliosphere is part of the Voyagers’ mission.

The Science papers focus on observations made from May to September 2012 by Voyager 1’s cosmic ray, low-energy charged particle and magnetometer instruments, with some additional charged particle data obtained through April of this year.

Voyager 2 is about 9 billion miles (15 billion kilometers) from the sun and still inside the heliosphere. Voyager 1 was about 11 billion miles (18 billion kilometers) from the sun Aug. 25 when it reached the magnetic highway, also known as the depletion region, and a connection to interstellar space. This region allows charged particles to travel into and out of the heliosphere along a smooth magnetic field line, instead of bouncing around in all directions as if trapped on local roads. For the first time in this region, scientists could detect low-energy cosmic rays that originate from dying stars.

“We saw a dramatic and rapid disappearance of the solar-originating particles. They decreased in intensity by more than 1,000 times, as if there was a huge vacuum pump at the entrance ramp onto the magnetic highway,” said Stamatios Krimigis, the low-energy charged particle instrument’s principal investigator at the Johns Hopkins University Applied Physics Laboratory in Laurel, Md. “We have never witnessed such a decrease before, except when Voyager 1 exited the giant magnetosphere of Jupiter, some 34 years ago.”

Other charged particle behavior observed by Voyager 1 also indicates the spacecraft still is in a region of transition to the interstellar medium. While crossing into the new region, the charged particles originating from the heliosphere that decreased most quickly were those shooting straightest along solar magnetic field lines. Particles moving perpendicular to the magnetic field did not decrease as quickly. However, cosmic rays moving along the field lines in the magnetic highway region were somewhat more populous than those moving perpendicular to the field. In interstellar space, the direction of the moving charged particles is not expected to matter.

In the span of about 24 hours, the magnetic field originating from the sun also began piling up, like cars backed up on a freeway exit ramp. But scientists were able to quantify that the magnetic field barely changed direction — by no more than 2 degrees.

“A day made such a difference in this region with the magnetic field suddenly doubling and becoming extraordinarily smooth,” said Leonard Burlaga, the lead author of one of the papers, and based at NASA’s Goddard Space Flight Center in Greenbelt, Md. “But since there was no significant change in the magnetic field direction, we’re still observing the field lines originating at the sun.”

NASA’s Jet Propulsion Laboratory, in Pasadena, Calif., built and operates the Voyager spacecraft. California Institute of Technology in Pasadena manages JPL for NASA. The Voyager missions are a part of NASA’s Heliophysics System Observatory, sponsored by the Heliophysics Division of the Science Mission Directorate at NASA Headquarters in Washington.

For more information about the Voyager spacecraft mission, visit: https://www.nasa.gov/voyager and https://voyager.jpl.nasa.gov .