Health in conflict: A public health student undertakes a challenging internship in Lebanon

“In Syria it is a fast death; here it is a slow death,” a woman lamented as she described her situation as a refugee in Lebanon escaping an escalating civil war in her homeland.

Each woman’s story was different, but they were all sad, grim. Another refugee had five children and a husband who is detained somewhere back home. “When a father is present you might be able to afford some of the children’s needs, but if he’s not, from whom do you seek help?” she asked.

These women were part of a focus group discussion to explore how it feels to be uprooted from a quiet life in Syria by a conflict that has grown steadily more violent. My colleagues and I were seeking to understand and characterize basic needs and daily struggles, reproductive health issues and experiences of gender-based violence faced by too many displaced Syrian women.

As a researcher interviewing Syrian refugee women for the United Nations Population Fund (UNFPA), I heard stories of hardship, loss and suffering again and again throughout my three-month summer internship in Lebanon in 2012. The conflict in Syria responsible for this refugee crisis began in March 2011 amidst a harsh government crackdown on protestors and civilians. After a year working at UNICEF Syria during the Iraqi refugee crisis of 2007-2008, I remain in close touch with Syrian friends who update me on the atrocities and violence that civilians face. Though the rebellion to oust President Bashar al-Assad has made some gains, there is no end in sight. By the beginning of the 2012 it was estimated that 60,000 people had been killed in Syria. 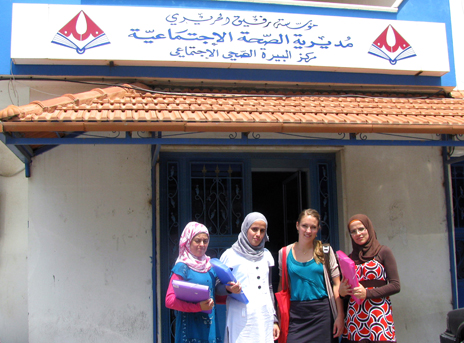 Amelia Reese Masterson (second from right) and data collectors outside of a clinic in the northern Lebanese town of Bireh that is run by the Rafik Hariri Foundation. She and colleagues interviewed many Syrian women inside the clinic and around the neighborhood. Image credit: Yale University

Since entering the Yale School of Public Health in 2011, I have been thinking about how to support Syrians using my public health education and skills. When an opportunity arose to work alongside a doctor in Lebanon to conduct a rapid assessment of reproductive health and gender-based violence among displaced Syrian women for UNFPA, I immediately knew that I wanted to go. As an M.P.H. student, I also went to Lebanon to fulfill my internship requirement for graduation, and I hoped that my skills in data collection and analysis would be of some benefit to the growing refugee population.

I arrived in Beirut amidst reports of an increasing flow of displaced Syrians and of the possibility of violence spilling across borders and upsetting Lebanon’s own fragile balance. The number of refugees in Lebanon rose from around 10,000 when I first arrived to 90,000 when I left in August. Today, the United Nations estimates that there are 170,000 displaced Syrians in Lebanon, the majority of whom are women and children.

During my first few days, I met with the reproductive health doctor at the American University in Beirut with whom I would work closely on the project. The task seemed daunting: assess the status and needs of Syrian women across two regions of Lebanon and gather useful data on the sensitive topics of reproductive health and gender-based violence. This information was intended to inform UNFPA’s emergency program for Syrian refugee women and families and to contribute important women’s health statistics for other agencies and nongovernmental organizations working to help this population.

I developed partnerships with six clinics across Lebanon, hired and trained eight data collectors and established contact with community centers serving the Syrian population. I attended many United Nations field coordination meetings to better grasp the situation and to begin to map women’s health services. I also spent hours on the phone with various clinics, introducing our project and arranging site visits.

After a month of preparation, data collection finally began. I took a taxi to the bus station in Beirut for the long journey to northern Lebanon. This would be my first trip to the study site in the town of Hesha, located in the mountainous border region with Syria. It would also be my first time overseeing data collection done completely in Arabic.

The northern region where three of our clinic study sites were located is guarded by military checkpoints, and a nonresident must obtain a pass to enter. As our bus drew near, I doubted whether this remote outpost had received notice of my U.N. pass. But being packed into a local minibus came in handy; the soldiers barely noticed me.

Upon arriving at the Hesha clinic, I began reviewing recruitment and survey procedures with the three local data collectors we had previously trained. We started interviews that day, and although the Syrian women who elected to participate were a bit nervous at first, they warmed to us and soon openly shared their stories.

The project was intense and there was little down time. But by summer’s end we had interviewed 452 displaced Syrian women, more than double the number I originally thought possible within our time frame. In addition to the surveys, we also conducted three focus group discussions to gather more detailed, descriptive data on Syrian women’s perceptions and use of reproductive health services, experiences of violence and coping strategies.

In settings of conflict and displacement such as this, it is common to find an increase in women’s susceptibility to reproductive health problems and gender-based violence. The stories we heard confirmed this. Women spoke of difficult pregnancies and a lack of money for ob-gyn services. They spoke of heightened tensions in homes with crowded conditions, few activities for children and cases of intimate partner violence. They also spoke of abuse and violence at the hands of armed men back in Syria.

For me, it was not until sitting down back in Beirut at the end of the summer with 452 lines of data that the enormity of the situation sunk in. These represented 452 individual stories of struggle that started amidst violence in their home country and now consisted of a life in limbo and an uncertain future. I chose to spend my summer in Lebanon, but I had the luxury of a return ticket. These women may not have the simple joy of returning to the homes they spoke of so longingly in rural regions of Syria or in urban centers such as Homs or Damascus.

The Syrian women I spoke with last summer are facing their displacement with remarkable strength, at times caring for children and relatives without the support of a husband. Among the many issues they voiced, the need for reproductive health care and psychosocial support stood out.

For me, the experience was pivotal. Not only did it give me the opportunity to apply the public health skills I gained during my first year at YSPH, but it also gave me a greater understanding of the many health issues faced by women in conflict settings. I left Lebanon inspired to pursue a career at the intersection of research and program management and with a desire to return to this region and continue public health work among conflict-affected or marginalized populations.

Amelia Reese Masterson earned her M.P.H. from the Yale School of Public Health in 2013. Her internship to Lebanon was supported by the Okvuran Fund for International Support.