New Zealand’s geologic hazards agency reported this week an ongoing, “silent” earthquake that began in January is still going strong. Though it is releasing the energy equivalent of a 7.0 earthquake, New Zealanders can’t feel it because its energy is being released over a long period of time, therefore slow, rather than a few short seconds.

These so-called “slow slip events” are common at subduction zone faults – where an oceanic plate meets a continental plate and dives beneath it. They also occur on continents along strike-slip faults like California’s San Andreas, where two plates move horizontally in opposite directions.  Occurring close to the surface, in the upper 3-5 kilometers (km) of the fault, this slow, silent movement is referred to as “creep events.” 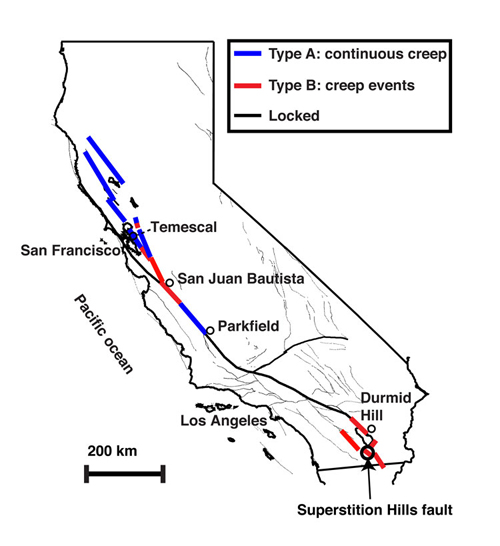 In a study published this week in Nature Geoscience, scientists from Woods Hole Oceanographic Institution (WHOI), McGill University, and GNS Science New Zealand provide a new model for understanding the geological source of silent earthquakes, or “creep events” along California’s San Andreas fault. The new study shows creep events originate closer to the surface, a much shallower source along the fault.

“The observation that faults creep in different ways at different places and times in the earthquake cycle has been around for 40 years without a mechanical model that can explain this variability,” says WHOI geologist and co-author Jeff McGuire.  “Creep is a basic feature of how faults work that we now understand better.”

For nearly two decades, geologists have accepted and relied upon mechanical model “A” to explain the geologic source of fault creep. It was widely believed that creep events observed on San Andreas fault were from the conditionally stable zone in Model A, however, the new study shows that they come from a much shallower source embedded within the uppermost “stable” layer. (Illustration by Jack Cook, Woods Hole Oceanographic Institution)

Fault creep occurs in shallow portions of the fault and is not considered a seismic event. There are two types of creep. In one form, creep occurs as a continuous stable sliding of unlocked portions of the fault, and can account for approximately 25 millimeters of motion along the fault per year. The other type is called a “creep event,” sudden slow movement, lasting only a few hours, and accommodating approximately 3 centimeters of slip per event. Creep events are separated by long intervals of slow continuous creep.

“Normal earthquakes happen when the locked portions of the fault rupture under the strain of accumulated stress and the plates move or slip along the fault,” says the study’s lead author, WHOI postdoctoral scholar Matt Wei. “This kind of activity is only a portion of the total fault movement per year. However, a significant fraction of the total slip can be attributed to fault creep.” 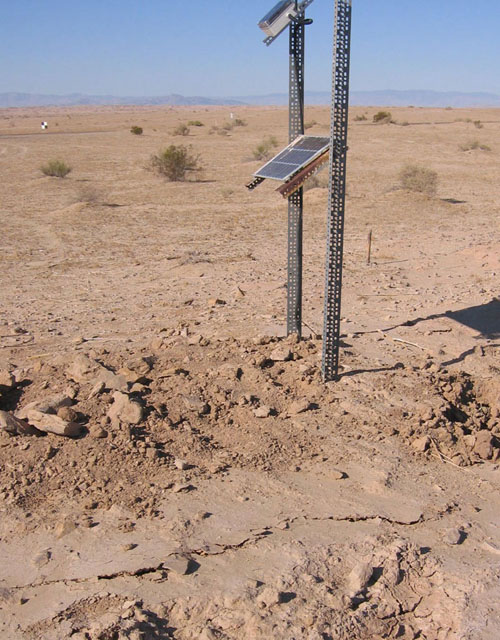 A solar-powered creepmeter beside cracks generated by a creep event on California’s Superstition Hills Fault in 2006. Creep events are slow and silent, last hours, and can accommodate approximately 3 centimeters of slip per event. (Photo courtesy of Matt Wei)

Scientists have mapped out the segments of the San Andreas fault that experience these different kinds of creep, and which segments are totally “locked,” experiencing no movement at all until an earthquake rupture. They know the source of earthquakes is a layer of unstable rock at about 5- 15 km depth along the fault.  But have only recently begun to understand the source of fault creep.

For nearly two decades, geologists have accepted and relied upon a mechanical model to explain the geologic source of fault creep. This model explains that continuous creep is generated in the upper-most “stable” sediment layer of the fault plane and episodic creep events originate in a “conditionally stable” layer of rock sandwiched between the sediment and the unstable layer of rock (the seismogenic zone, where earthquakes originate) below it.

But when Wei and his colleagues tried to use this mechanical model to reproduce the geodetic data after a 1987 earthquake in southern California’s Superstition Hills fault, they found it is impossible to match the observations.

“Superstition Hills was a very large earthquake.  Immediately following the quake, the US Geologic Survey installed creepmeters to measure the post-seismic deformation. The result is a unique data set that shows both afterslip and creep events,” says Wei. 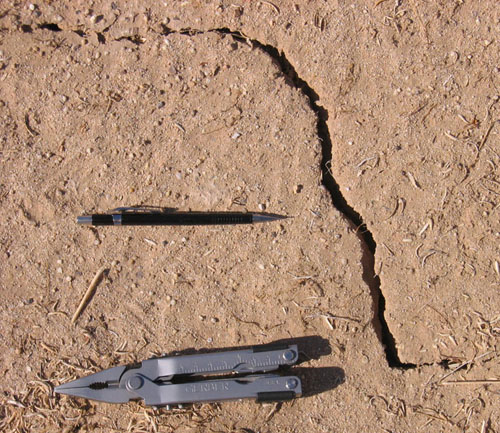 The researchers could only match the real world data set and on-the-ground observations by embedding an additional unstable layer within the top sediment layer of the model. “This layer may result from fine-scale lithological heterogeneities within the stable zone —frictional behavior varies with lithology, generating the instability,” the authors write. “Our model suggests that the displacement of and interval between creep events are dependent on the thickness, stress, and frictional properties of the shallow, unstable layer.”

There are major strike-slip faults like the San Andreas around the world, but the extent of creep events along those faults is something of a mystery.  “Part of the reason is that we don’t have creepmeters along these faults, which are often in sparsely populated areas. It takes money and effort, so a lot of these faults are not covered [with instruments]. We can use remote sensing to know if they are creeping, but we don’t know if it’s from continuous creep or creep events,” says Wei.

Simulating faults to better understand how stress, strain, and earthquakes work is inherently difficult because of the depth at which the important processes happen.  Recovering drill cores and installing instruments at significant depths within the earth is very expensive and still relatively rare. “Rarely are the friction tests done on real cores,” says Wei.  “Most of the friction tests are done on synthetic cores. Scientists will grind rocks into powder to simulate the fault.”   Decades of these experiments have provided an empirical framework to understand how stress and slip evolve on faults, but geologists are still a long way from having numerical models tailored to the parameters that hold for particular faults in the earth.

McGuire says the new research is an important step in ground-truthing those lab simulations.  “This work has shown that the application of the friction laws derived from the lab can accurately describe some first order variations that we observe with geodesy between different faults in the real world,” he says. “This is an important validation of the scaling up of the lab results to large crustal faults.” 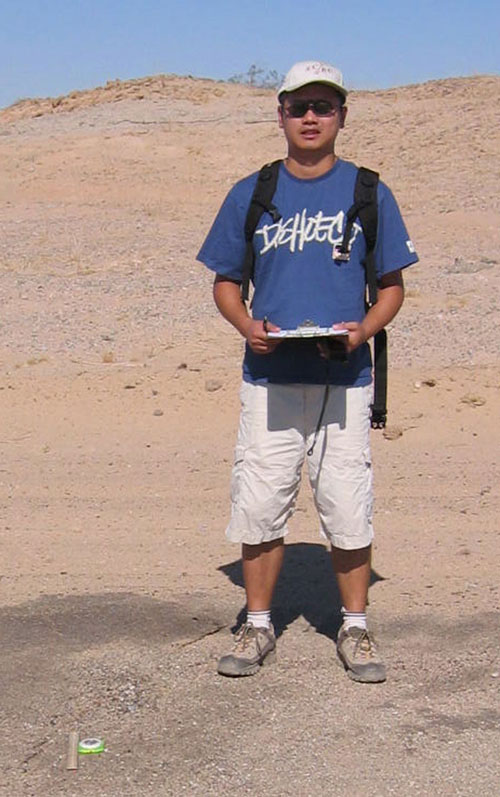 WHOI postdoctoral scholar Matt Wei, then a graduate student at Scripps Institution of Oceanography, in the field in 2006. (Photo courtesy of Matt Wei)

For the scientists, this knowledge is a new beginning for further research into understanding fault motion and the events that trigger them.  Creep events are important because they are shallow and release stress, but are still an unknown factor in understanding earthquake behavior. “There’s much we still don’t know. For example, it’s possible that the shallow layer source of creep events could magnify an earthquake as it propagates through these layers,” says Wei.

Additionally, the findings can help understand the slow slip events happening along subduction zones, like the ongoing event in New Zealand.  “By validating the friction models with shallow creep events that have very precise data, we can have more confidence in the mechanical implications of the deep subduction zone events,” McGuire says.