In the growth of crystals, do nanoparticles act as “artificial atoms” forming molecular-type building blocks that can assemble into complex structures? This is the contention of a major but controversial theory to explain nanocrystal growth. A study by researchers at the U.S. Department of Energy (DOE)’s Lawrence Berkeley National Laboratory (Berkeley Lab) may resolve the controversy and point the way to energy devices of the future.

Led by Haimei Zheng, a staff scientist in Berkeley Lab’s Materials Sciences Division, the researchers used a combination of transmission electron microscopy and advanced liquid cell handling techniques to carry out real-time observations of the growth of nanorods from nanoparticles of platinum and iron. Their observations support the theory of nanoparticles acting like artificial atoms during crystal growth.

“We observed that as nanoparticles become attached they initially form winding polycrystalline chains,” Zheng says. “These chains eventually align and attach end-to-end to form nanowires that straighten and stretch into single crystal nanorods with length-to-thickness ratios up to 40:1. This nanocrystal growth process, whereby nanoparticle chains as well as nanoparticles serve as the fundamental building blocks for nanorods, is both smart and efficient.”

Zheng is the corresponding author of a paper describing this research in the journal Science. The paper is titled “Real-Time Imaging of Pt3Fe Nanorod Growth in Solution.” Co-authors are Hong-Gang Liao, Likun Cui and Stephen Whitelam.

If the near limitless potential of nanotechnology is to even be approached, scientists will need a much better understanding of how nano-sized particles can assemble into hierarchical structures of ever-increasing organization and complexity. Such understanding comes from tracking nanoparticle growth trajectories and determining the forces that guide these trajectories.

Through the use of transmission electron microscopy and liquid observation cells, scientists at Berkeley Lab and elsewhere have made significant progress in observing nanoparticle growth trajectories, including the oriented attachment of nanoparticles – the chemical phenomenon that starts the growth of nanocrystals in solution. However, these observations have typically been limited to the first few minutes of crystal growth. In their study, Zheng and her colleagues were able to extend the time of observation from minutes to hours. 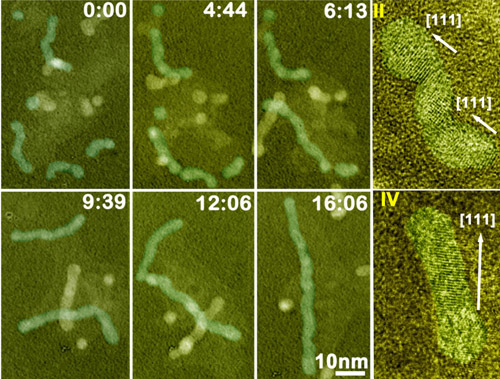 “The key to studying the growth of colloidal nanocrystals with different shapes and architectures is to maintain the liquid in the viewing window long enough to allow complete reactions,” Zheng says. “We dissolved molecular precursors of platinum and iron in an organic solvent and used capillary pressure to draw the growth solution into a silicon-nitride liquid cell that we sealed with epoxy. The sealing of the cell was especially important as it helped keep the liquid from turning viscous over time. Previously, we’d often see the liquids become viscous and this would prevent the nanoparticle interactions that drive crystal growth from taking place.”

Zheng and her colleagues chose to study the growth of platinum iron nanorods because of the electrocatalytic material’s promising potential for use in next generation energy conversion and storage devices. They were able to observe these nanoparticles assemble into nanorod crystals using powerful transmission electron microscopes at Berkeley Lab’s National Center for Electron Microscopy, including TEAM 0.5 (Transmission Electron Aberration-corrected Microscope), which can produce images with half‑angstrom resolution – less than the diameter of a single hydrogen atom.

“From what we observed only single nanoparticles exist at the beginning of crystal growth, but, as growth proceeds, small chains of nanoparticles become dominant until, ultimately, only long chains of nanoparticles can be seen,” Zheng says. “Our observations provide a link between the world of single molecules and hierarchical nanostructures, paving the way for the rational design of nanomaterials with controlled properties.” 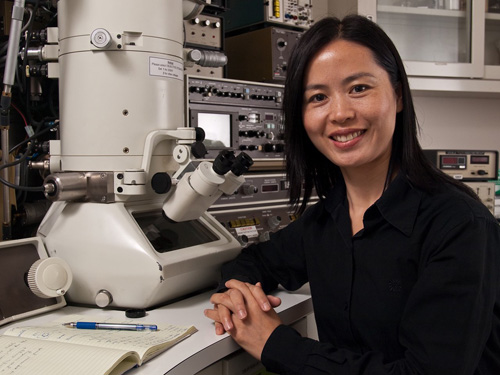