Shortly after the Deepwater Horizon disaster, mysterious honeycomb material was found floating in the Gulf of Mexico and along coastal beaches. Using state-of-the-art chemical forensics and a bit of old-fashioned detective work, a research team led by scientists at Woods Hole Oceanographic Institution (WHOI) confirmed that the flotsam were pieces of material used to maintain buoyancy of the pipe bringing up oil from the seafloor.

On May 5, 2010, 15 days after the Deepwater Horizon explosion, oceanographer William Graham and marine technicians from the Dauphin Island Sea Lab were working from a boat about 32 miles south of Dauphin Island, Ala., when they saw a 6-mile-long, east-west line containing more than 50 pieces of white material interspersed with sargassum weed. The porous material was uniformly embedded with black spheres about a centimeter in diameter. No oil slick was in sight, but there was a halo of oil sheen around the honeycomb clumps.

Two days later, the researchers also collected similar samples about 25 miles south of Dauphin Island. Nobody knew what the material was, with some hypothesizing at first that it could be coral or other substance made by marine plants or animals. Graham sent samples to WHOI chemist Chris Reddy, whose lab confirmed that the material was not biological. But the material’s source remained unconfirmed. 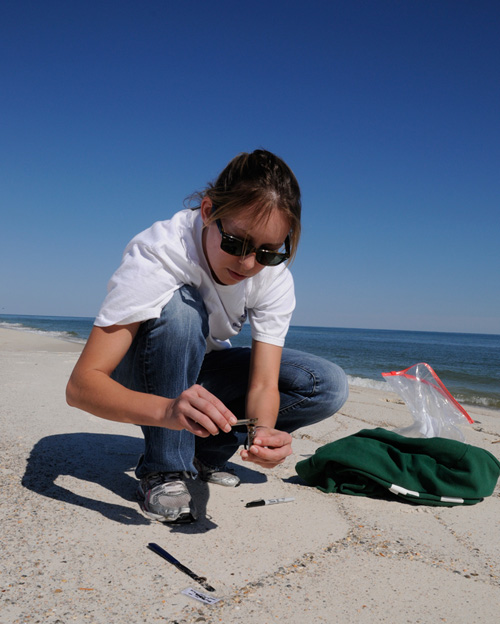 WHOI Research Assistant Catherine Carmichael and WHOI marine chemist Chris Reddy analyzed oil residue on pieces of flotsam collected from several Gulf beaches. The chemistry of the oil on the debris matched that of oil sampled directly from the broken pipe from the Macondo well above the Deepwater Horizon rig. (Photo by Chris Reddy, Woods Hole Oceanographic Institution)

In January 2011, Reddy and WHOI researcher Catherine Carmichael, lead author of the new study, collected a piece of the same unknown material of Elmer’s Beach, Grand Isle, La. In April, 2011, they found several large pieces, ranging from 3 to 10 feet, of the honeycomb debris on the Chandeleur Islands off Louisiana.

Oil on all these samples was analyzed at WHOI using comprehensive two-dimensional gas chromatography. The technique identifies the thousands of individual chemical compounds that comprise different oils from different reservoirs. The chemistry of the oil on the debris matched that of oil sampled directly from the broken pipe from the Macondo well above the Deepwater Horizon rig. 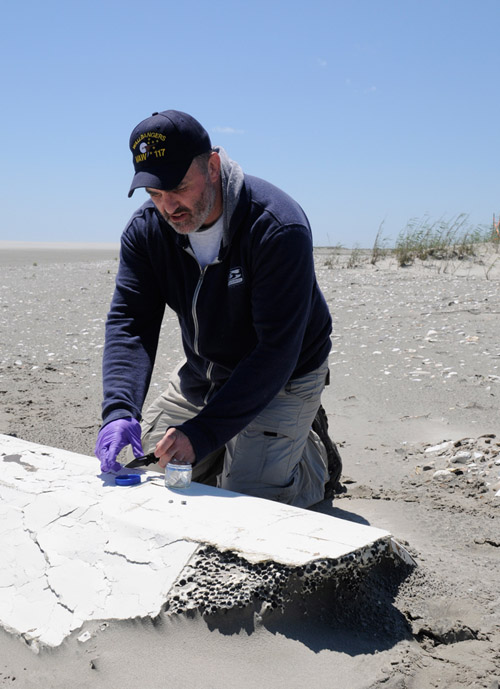 In addition, one piece of debris from the Chandeleur Islands retained a weathered red sticker that read “Cuming” with the numbers 75-1059 below it. Reddy found a company called Cuming Corporation in Avon, Mass., which manufactures syntactic foam flotation equipment for the oil and gas industry. He e-mailed photos of the specimen to the company, and within hours, a Cuming engineer confirmed from the serial number that the foam came from a buoyancy module from Deepwater Horizon.

“We realized that the foam and the oil were released into the environment at the same time,” Reddy said. “So we had a unique tracer that was independent of the oil itself to chronicle how oil and debris drifted out from the spill site.” 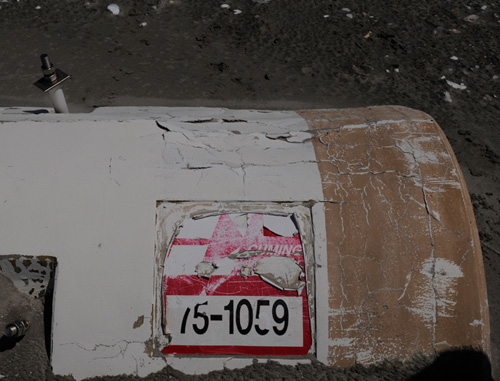 The WHOI researchers took a close look at photos they had taken of the debris on the Chandeleur Islands and found this weathered sticker. After a bit of research, they confirmed that it was syntactic foam flotation from the Deepwater Horizon rig. (Photo by Chris Reddy, Woods Hole Oceanographic Institution)

The scientists overlaid the locations where they found honeycomb debris on May 5 and 7 with daily forecasts produced by the National Oceanic and Atmospheric Administration (NOAA) of the trajectory of the spreading oil slick. NOAA used a model that incorporated currents and wind speeds, along with data from planes and satellites. On both days, the debris was about 6.2 miles ahead of the spreading slick.

The explanation, the scientists said, is the principle of leeway, a measure of how fast wind or waves push materials. The leeway for fresh oil is 3 to 3.3 percent, but the scientists suspected that “the protruding profile of the buoyant material” acted acting like a sail, allowing wind to drive it faster than and ahead of the floating oil. 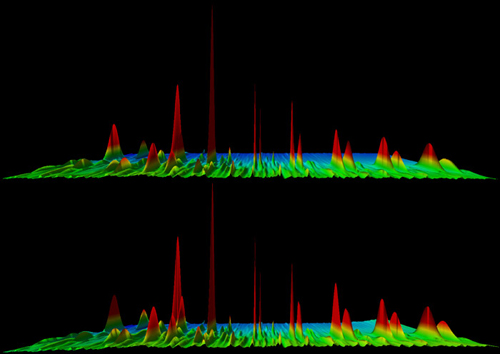 The WHOI scientists analyzed the oil on the debris using comprehensive two-dimensional gas chromatography, a technique that can identify the thousands of individual chemical compounds that comprise different oils from different reservoirs. The chemical “fingerprints” of oil on the debris and oil from Deepwater Horizon matched. (Courtesy of Bob Nelson, Woods Hole Oceanographic Institution)

In this case, the flotsam served as a harbinger for the oncoming slick, but because different materials can have different leeways, oil spill models may not accurately forecast where oiled debris will head. “Even a small deviation in leeway can, over time, results in significant differences in surface tracks because of typical wind fields,” the scientists wrote.

The Coast Guard has a long history of calculating the leeway of various materials, from life jackets to bodies of various sizes and weights, to improve forecasts of where the materials would drift if a ship sank or a plane crashed into the sea. But calculating leeways has not been standard practice in oil spills. 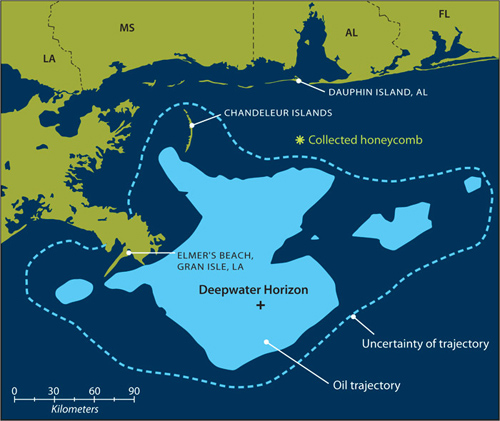 Officials used a model that incorporated currents and wind speeds, along with data from planes and satellites, to predict a trajectory of the oil slick spreading from the Deepwater Horizon oil rig. Shaded area represent the predicted trajectory on May 7, 2010. But predictions are not exact; the dotted line represents the degree of uncertainty for the prediction. The mysterious debris was found about 6.2 miles ahead of the projected trajectory of the spreading slick. (Map adapted from NOAA/NOS/OR&R Trajectory Forecast Mississippi Canyon 252) (Illustration by Jack Cook, Woods Hole Oceanographic Institution)

“We never had solid data to make the case until this study,” said Merv Fingas, who tracked oil spills for more than 38 years for Environment Canada, which is equivalent to the U.S. Environmental Protection Agency.

“These results,” the study’s authors wrote, “provide insights into the fate of debris fields deriving from damaged marine materials and should be incorporated into emergency response efforts and forecasting of coastal impacts during future offshore oil spills.”