COLUMBIA, Mo. – For years, scientists have thought that a continental ice sheet formed during the Late Cretaceous Period more than 90 million years ago when the climate was much warmer than it is today. Now, a University of Missouri researcher has found evidence suggesting that no ice sheet formed at this time. This finding could help environmentalists and scientists predict what the earth’s climate will be as carbon dioxide levels continue to rise.

“Currently, carbon dioxide levels are just above 400 parts per million (ppm), up approximately 120 ppm in the last 150 years and rising about 2 ppm each year,” said Ken MacLeod, a professor of geological sciences at MU. “In our study, we found that during the Late Cretaceous Period, when carbon dioxide levels were around 1,000 ppm, there were no continental ice sheets on earth. So, if carbon dioxide levels continue to rise, the earth will be ice-free once the climate comes into balance with the higher levels.” 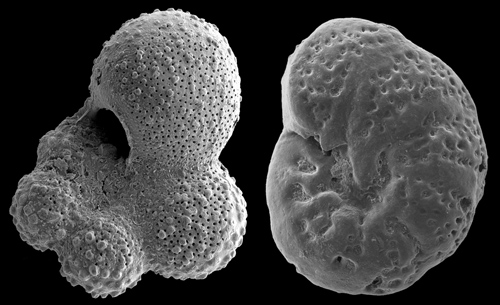 Organisms MacLeod studied. In the study, MacLeod examined fossils of organisms that lived 90 million years ago. This photo is an image from a Scanning electron microscope of a planktic (left) and benthic (right) foraminifera from Tanzania. Both shells are less than 0.5 millimeters across. Image credit: University of Missouri

In his study, MacLeod analyzed the fossilized shells of 90 million-year-old planktic and benthic foraminifera, single-celled organisms about the size of a grain of salt. Measuring the ratios of different isotopes of oxygen and carbon in the fossils gives scientists information about past temperatures and other environmental conditions. The fossils, which were found in Tanzania, showed no evidence of cooling or changes in local water chemistry that would have been expected if a glacial event had occurred during that time period. 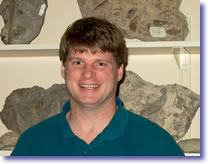 Ken MacLeod, professor of geological sciences. In a new study, MacLeod found evidence that a continental ice sheet did not form during the Late Cretaceous Period more than 90 million years ago. This information could help scientists predict changes in earth’s climate as our temperatures rise. Image credit: University of Missouri

“We know that the carbon dioxide (CO2) levels are rising currently and are at the highest they have been in millions of years. We have records of how conditions have changed as CO2 levels have risen from 280 to 400 ppm, but I believe it also is important to know what could happen when those levels reach 600 to 1000 ppm,” MacLeod said. “At the rate that carbon dioxide levels are rising, we will reach 600 ppm around the end of this century. At that level of CO2, will ice sheets on Greenland and Antarctica be stable? If not, how will their melting affect the planet?”

Previously, many scientists have thought that doubling CO2 levels would cause earth’s temperature to increase as much as 3 degrees Celsius, or approximately 6 degrees Fahrenheit. However, the temperatures MacLeod believes existed in Tanzania 90 million years ago are more consistent with predictions that a doubling of CO2 levels would cause the earth’s temperature could rise an average of 6 degrees Celsius, or approximately 11 degrees Fahrenheit.

“While studying the past can help us predict the future, other challenges with modern warming still exist,” MacLeod said. “The Late Cretaceous climate was very warm, but the earth adjusted as changes occurred over millions of years. We’re seeing the same size changes, but they are happening over a couple of hundred years, maybe 10,000 times faster. How that affects the equation is a big and difficult question.”

MacLeod’s study was published in the October issue of the journal Geology.